Conditions include a three-year ban on closing any hospitals 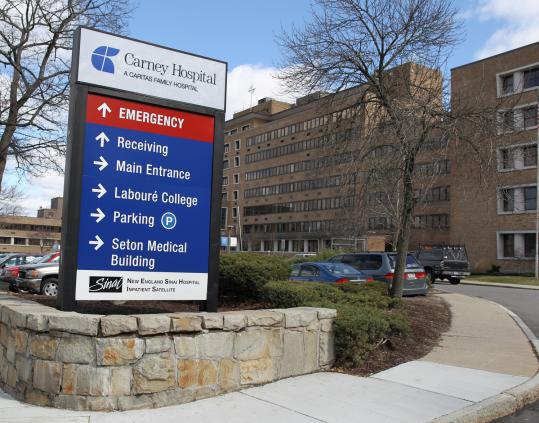 Attorney General Martha Coakley yesterday recommended approval of the proposed sale of Caritas Christi Health Care to a New York private equity firm, a deal that would bring for-profit health care on a large scale to a state long dominated by nonprofit hospitals.

But Coakley imposed multiple conditions aimed at protecting Caritas employees and patients and strengthening the state’s health care market at a time of rising costs and declining Medicaid payments.

The terms are meant to assure that the chain of six financially struggling Catholic hospitals — including flagship St. Elizabeth’s Medical Center in Brighton — remains open for at least five years and fully funds pensions of about 13,000 employees and retirees.

Coakley also insisted that Boston-based Caritas maintain its mental health and alcoholism services and pay for continuing public oversight of its operations.

Notably absent from Coakley’s report were two conditions called for by critics of the acquisition by Cerberus Capital Management of New York. They wanted Cerberus to establish a foundation to fund community health programs and agree not to sell the hospitals for five to seven years. Instead, it will only have to maintain current levels of charity care and abide by a promise to retain ownership of Caritas for three years.

The 64-page report said the modified purchase agreement negotiated by Coakley’s office, Caritas, and Cerberus is in the public interest because it will preserve the hospital system and create more competition.

Coakley’s findings stemmed from a five-month investigation led by David Spackman, chief of the attorney general’s public charities division, which oversees nonprofit hospitals. They will be reviewed by the Supreme Judicial Court of Massachusetts, which must approve the transfer of charitable assets to a private enterprise. That is expected to happen in the coming weeks.

Cerberus also needs new hospital licenses from the Massachusetts Public Health Council, which is expected to consider the matter next Wednesday.

The parties are hoping to complete the deal by Oct. 31.

The deal’s critics warned in a letter to Coakley’s office and during public hearings over the summer that Cerberus’s money might allow Caritas to poach doctors from rival hospitals and create limited networks of health care providers that would exclude competitors. The continuing regulatory oversight, for which Cerberus would contribute $1.5 million over five years, is an effort to address those concerns.

“They pushed the deal to the limits of what could be gotten for the state,’’ said Caritas’s chief executive, Ralph de la Torre, who shuttled between the attorney general’s office and Cerberus in recent weeks in an attempt to salvage a sale that had twice fallen apart.

De la Torre will run the Caritas system under a Cerberus holding company, Steward Healthcare System LLC, and will seek to expand it in Massachusetts and beyond. The acquisition, he said, will rescue a hospital system that otherwise would not be able to keep operating.

The fate of the system has been an ongoing source of anxiety for staff, the communities where Caritas hospitals are major employers, and for Caritas executives, who recently told members of the Massachusetts Nurses Association that they would have to close St. Elizabeth’s and Carney Hospital in Dorchester if the deal collapsed.

“It’s a very big responsibility having this many families and this many people hanging in the balance,’’ de la Torre said. “We’re all one huge step closer to me being able to sleep a few more hours at night.’’

Other hospitals in the Caritas system are Norwood Hospital, Good Samaritan Medical Center in Brockton, Saint Anne’s Hospital in Fall River, and Holy Family Hospital in Methuen. Together they have about 12,000 employees.

In addition, Caritas in August asked a Rhode Island judge to allow it to purchase Landmark Medical Center, a Woonsocket hospital in court-appointed receivership. And de la Torre has been talking to other hospital executives about potential alliances.

Timothy F. Price, managing director of Cerberus, declined to comment on Coakley’s recommendation, saying it is the firm’s policy not to discuss transactions while they are under regulatory review.

Dianne J. Anderson, chief executive of Lawrence General Hospital, said in a statement that Cerberus ownership would “create uneven playing fields for community hospitals throughout the state.’’ Lawrence General competes with nearby Holy Family Hospital in the Merrimack Valley.

Coakley’s report “does not address issues expressed by concerned citizens and the other vital not-for-profit community providers in regards to unintended and perhaps serious consequences in the future,’’ Anderson wrote.

But Amy Whitcomb Slemmer, executive director of Health Care for All, a Boston-based consumer advocacy group, said Coakley “included monitoring and vigorous oversight’’ in her recommendation.

Health Care For All initially suggested the creation of a charitable foundation as a condition of the sale. Whitcomb Slemmer said the group now hopes to participate in the system’s public oversight and possibly receive a portion of the $1.5 million set aside for that purpose.

Enid Eckstein, vice president of the Service Employees International Union, also welcomed the report. “Our hope is that the deal continues to move ahead,’’ Eckstein said. SEIU, the state’s largest health care union, has supported the proposed sale since it was made public.

A representative of a group called the Coalition to Save Catholic Health Care said the conditions recommended by Coakley do not go far enough to preserve the hospitals’ decades-old Catholic mission. “You simply don’t throw that out in a three-year period,’’ said R.T. Neary, the coalition’s chairman. “It’s too valuable.’’

In her report, the attorney general agreed that Caritas would be in serious financial trouble without the backing of Cerberus. She noted that the system had working capital — the value of its assets minus its liabilities — of less than $1 million at the end of the 2009 fiscal year.

“It is impracticable, if not impossible, for Caritas to continue to operate as a public charity,’’ the report said.

The restructured Cerberus agreement to buy Caritas also contains many provisions from the original deal, signed March 19, including a commitment by the buyer to make $400 million in capital improvements over the next four years. Caritas has estimated those improvements will create 3,000 to 4,000 jobs.

Pressured by the attorney general’s office to fully fund all Caritas employee retirement plans, Cerberus also agreed to put up an additional $45 million to cover a larger shortfall discovered in unfunded pension liability. That will bring to about $495 million the amount Cerberus will pay to retire Caritas debt.

New terms of the contract include a commitment by the buyer not to close the Caritas hospitals for three years under any circumstances. The “no close’’ promise was extended at least two more years unless a particular hospital has lost money for two consecutive years, monitors have completed an 18-month review, and it has given six months notice.

Cerberus will also keep in-patient psychiatric and detoxification beds at Caritas hospitals, even though those services now lose money.

Robert Weisman can be reached at weisman@globe.com; Megan Woolhouse at mwoolhouse@globe.com.