Technology helps implanting of stents to be more accurate 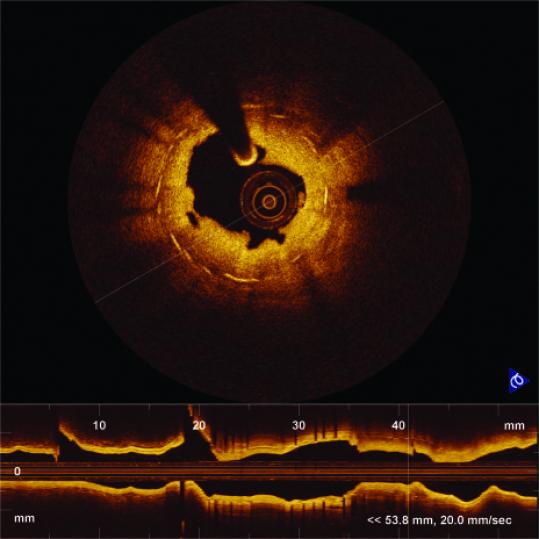 A patient’s blood vessel shows scar tissue that has grown up around a previously implanted stent.
By Karen Weintraub Globe Correspondent / May 31, 2010

A Westford company’s tiny imaging system is improving the view into blood vessels, helping doctors implant stents more accurately and offering new insights into what happens before a heart attack.

LightLab Imaging Inc.’s system was approved this month by the Food and Drug Administration. It uses a technology called optical coherence tomography to capture an image roughly twice the size of a red blood cell — 10 times better resolution than the ultrasound technology currently used.

“We see a lot of things we did not see in the past,’’ said Dr. Ik-Kyung Jang, a professor at Harvard Medical School and a cardiologist at Massachusetts General Hospital. He recently led a study of LightLab’s C7-XR Imaging System. (He has no financial interest in the company, he said.)

LightLab, a subsidiary of the Japanese medical equipment company Goodman Co., agreed May 20 to be acquired by St. Jude Medical Inc., a St. Paul medical device company, for about $90 million.

LightLab’s chief executive, David Kolstad, said he expects the deal to allow the company to expand its 100-employee workforce.

Twelve-year-old LightLab was formed to commercialize imaging technology developed by James Fujimoto, an electrical engineering professor at the Massachusetts Institute of Technology, and Eric Swanson, then of Lincoln Labs.

Kolstad predicts the global market for optical coherence tomography will reach $1.3 billion within five years. LightLab is the first company to bring it to market in the United States, though the system has been used in more than 20,000 patients in Europe and Japan, he said.

The procedure costs about $1,200, roughly 10 percent more than for an ultrasound image of the same area.

The technology works by bouncing two beams of light, one off a mirror and another of equal length off the tissue. A detailed image is created by comparing how the two beams bounce back.

Dr. Sergio Waxman, an interventional cardiologist at Lahey Clinic in Burlington, said optical coherence tomography may replace some ultrasound imaging, which is now used in roughly 10 percent of angioplasty procedures at Lahey.

Waxman, who has studied earlier versions of the imaging technology but is not connected to LightLab, said the high resolution allows doctors to estimate more accurately the size of a blood vessel and therefore the size of a stent needed to prop it open.

An improved view may also help ensure that a stent is positioned properly, covering plaque that might rupture and trigger a blood clot or heart attack.

“The real question is: Can we translate that into a net benefit for the patient? That’s the question that needs to be answered still,’’ said Waxman, who said he is interested in buying LightLab’s machine for Lahey.

“We are at the dawn of an imaging revolution,’’ Waxman said, “where we will be able to obtain a lot of information from within the artery that wasn’t within our reach before. However, we still don’t know what we are going to be able to do with all that information. Further studies and experience will be needed.’’

Jang is beginning a study of the C7-XR system that is expected to show whether it benefits patients, and eventually to help predict where stents should be placed.

Today, doctors can’t tell the difference between plaques that are likely to rupture without stenting and more benign ones that don’t need treatment. The membranes holding back these plaques are too thin — about 65 microns — to be seen by ultrasound, so doctors don’t know if there’s a visual cue that might indicate danger. But optical coherence tomography can “see’’ at scales of 10 to 15 microns, Jang said.

By following 3,000 patients who have had the high-resolution imaging, Jang hopes to better understand what the most dangerous plaques look like.

At the end of the five-year study, he said, he expects to be able to predict with more confidence where doctors need to intervene.