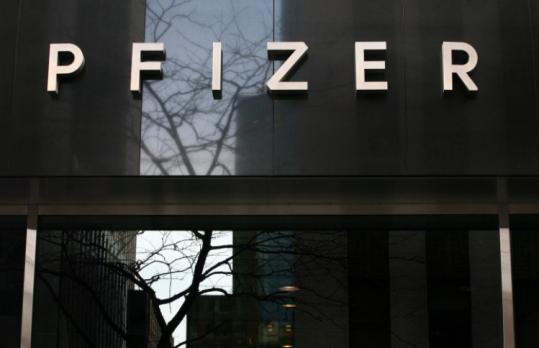 Pfizer headquarters in New York. The company is cutting 300 jobs at its Andover facility as part of a worldwide downsizing. (Mark Lennihan/ Associated Press/ 2009 File)
By Robert Weisman Globe Staff / May 19, 2010

Pharmaceutical giant Pfizer Inc. yesterday said it will eliminate about 300 manufacturing jobs at its Andover biotechnology plant over the next five years as part of a global reduction in production capacity following its purchase of Wyeth Pharmaceuticals.

The job cuts, which will be accomplished through layoffs and attrition, will leave Pfizer with just over 2,000 employees in Massachusetts, including 1,300 at the former Wyeth manufacturing plant and 750 at two research and development sites in Cambridge.

Wyeth had nearly 1,900 production and research workers at its Andover plant in the fall of 2007, two years before Pfizer completed its blockbuster $68 billion purchase of the drug maker. Since then, Pfizer has been working to scale back manufacturing capacity.

The new round of cuts in Andover is part of a broader move to reconfigure the Pfizer production network worldwide. As part of that effort, the company said yesterday it will shut down eight plants in the United States, Puerto Rico, and Ireland, while reducing operations at another six factories — including the Andover plant — in the United States, Puerto Rico, Germany, Ireland, and the United Kingdom. Those moves will pare 6,000 jobs in all.

Shares of Pfizer edged down 30 cents to $15.81 yesterday on the New York Stock Exchange, a decline of 1.8 percent.

Despite the Andover rollback, Pfizer remains committed to Massachusetts, where it is developing and manufacturing drugs and collaborating with academic labs and smaller biotech partners, said Liz Power, spokeswom an for the New York-based drug maker.

“A year and a half ago, Pfizer had a few hundred people in Massachusetts,’’ said Power, referring to a single research lab. “Now we’re north of 2,000. Massachusetts is a place where we see a strong future.’’

Before the Pfizer acquisition, state government officials had pledged to support Wyeth’s expansion plans in Massachusetts. In September 2007, Governor Deval Patrick said more than $2 million in infrastructure grants would be set aside to improve a northbound Interstate 93 onramp near the Wyeth manufacturing site. The grant, which state officials hoped would attract another $13 million in federal and state funds for the project, was conditioned on Wyeth adding 100 jobs in Andover.

Kofi Jones, a spokeswoman for the Patrick administration, said yesterday the $2 million promised by the state has not been spent. She said it must still be determined whether the state will invest in the public infrastructure project.

Pfizer’s Power said that, even with the staffing cutback, the company plans to continue its three existing production lines in Andover.

Workers there make BeneFix, an injectable medicine that treats hemophilia B, a bleeding condition also known as Christmas disease; bone morphogenetic protein, which stimulates bone growth for people with spinal degeneration and is marketed by Pfizer partner Medtronic Inc. as part of a drug-device combination known as Infuse; and a component of the pneumonia vaccine Prevnar.

Pfizer plans to consolidate global production of the Prevnar component — polysaccharides that target certain strains of pneumonia — in Andover as part of its overall consolidation, Power said.