Cerberus’s success hurt by a pair of gambles 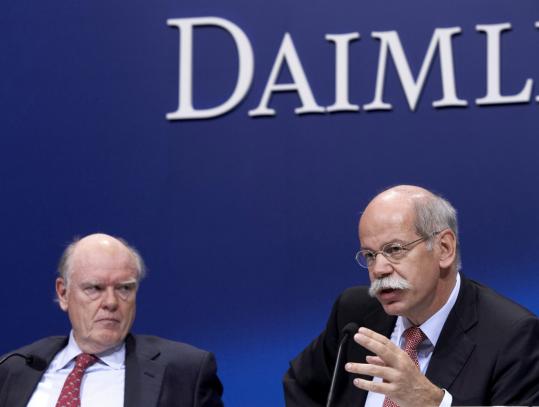 Secretive even by the standards of the hushed world of private equity, Cerberus Capital Management is perhaps best known for two big gambles that went spectacularly wrong: Its acquisitions of Chrysler Corp. and GMAC, both of which ultimately required huge government bailouts and lost billions for Cerberus and its partners.

Until those deals, the Wall Street firm had a string of successful acquisitions that earned it accolades in the private equity world, where taking calculated risks on struggling companies can be rewarded with huge payouts when the business goes right.

Not so with Chrysler and GMAC. Because of the overwhelming troubles hammering the American auto and credit sectors, the two companies’ financial conditions only worsened despite Cerberus’s efforts to fix them. Combined, Chrysler and GMAC needed $22.6 billion in government aid to stay alive, and Cerberus’s reputation suffered as a result.

Now Cerberus — which takes its name from the mythical three-headed dog that guards the gates of hell — is trying another high-wire act. It will bring its highly sophisticated financial management to a cash-starved hospital chain, one that had been a nonprofit with a history of providing charitable care to the poor.

Executives with both New York City-based Cerberus and Caritas Christi Health Care recognize the potential tensions in the arrangement, but took pains to stress that Cerberus sees itself as a long-term steward of the business and will not interfere with the hospital chain’s Catholic mission or day-to-day operations.

“We have no incentive to do a quick flip,’’ said Cerberus managing director Timothy F. Price. “What we want to do is make it successful, keep it successful, and hold it. We’ve been holding many of our companies five years or longer.’’

Since Cerberus was founded with about $10 million in seed money in 1992, the firm has acquired companies in a variety of sectors, including software firms, car rental companies, and the Hollywood movie production studio Spyglass Entertainment. It now has more than 40 companies in its investment portfolio and about $23 billion under management.

Chief executive Steve Feinberg is known for being among the country’s most powerful — and secretive — financiers, rarely speaking to the media or making public appearances. Among Cerberus’s more visible faces are its chairman, John W. Snow, a Treasury secretary in the George W. Bush administration; and Dan Quayle, the former vice president who occasionally gives public talks about the firm’s investments.

The purchase of Caritas is the firm’s first major foray into the medical care world, coming as the industry prepares for the implementation of the sweeping health care overhaul signed by President Obama this week.

Most of Cerberus’s investments have been successful. It typically buys distressed companies, tries to fix their finances or streamline operations, and profits by selling off all or part of the companies, and reaping fees for its management along the way. One recent success was Talecris Biotherapeutics Holdings Corp., a North Carolina biotechnology interest that it bought in 2005 for about $90 million and took public last year. The company is now valued at $2.5 billion and reported revenues of $1.53 billion in 2009.

“We’ve fixed a lot more companies than we’ve failed at, or today we wouldn’t have grown to be managing $23 billion,’’ Price said. “Some mixture of hits and misses are inevitable in our business.’’

But Cerberus also had failures and controversies.

Creditors of the bankrupt California department store chain Mervyn’s sued Cerberus and two other private equity firms, accusing them of fraud when the three bought the company from Target Corp. in 2004. The lawsuit alleges that Sun Capital Partners, Cerberus, and another firm borrowed against the store’s real estate assets to purchase the company, but made Mervyn’s repay the debt by charging the stores “substantially greater’’ rents to occupy properties that it just days before owned.

Mervyn’s creditors said the additional costs were $80 million and contributed to the company’s bankruptcy. Meanwhile, the department store claimed the private equity firms paid themselves $58 million in fees from proceeds of the purchase, and $400 million in payments or distributions since then.

Price said the Mervyn’s lawsuit is without merit and the company “vehemently’’ denies the creditors’ allegations. The case is ongoing in federal Bankruptcy Court in Delaware.

Then there are the GMAC and Chrysler investments. Cerberus still owns roughly a 15 percent stake in GMAC, but forfeited its $1 billion plus equity investment in Chrysler when the company declared bankruptcy a year ago.

Some auto industry analysts said Cerberus executives got so caught up in being owners of one of America’s top automakers that it clouded their business judgment.

“I think it was ego,’’ said Craig Carlson, a Boston automotive industry analyst. “They thought they could own one of the Big Three automakers, which is pretty cool. They thought they were smart enough that they could turn it around and make it successful. They underestimated a lot of stuff.’’

Cerberus asserts that Chrysler would have been much worse off had it not stepped in in 2007. The firm initiated job cuts and plant closings that made Chrysler much leaner. But when larger issues plaguing the auto industry swamped its company, Cerberus said it had voluntarily offered to give up its Chrysler stake and helped steer the carmaker into a soft bankruptcy landing, rather than an outright liquidation. Indeed, Obama singled out the chief executive Cerberus appointed at Chrysler for getting deals with Fiat and auto worker unions that are the basis for the company’s restructuring.

“Chrysler was a victim of the same worldwide financial meltdown especially targeted at real estate and automotive companies,’’ said Price, the Cerberus managing director. “I think by our actions and by the way we handled it, we kept more jobs and did more for Chrysler.’’

Erin Ailworth of the Globe staff contributed to this report. Casey Ross can be reached at cross@globe.com.