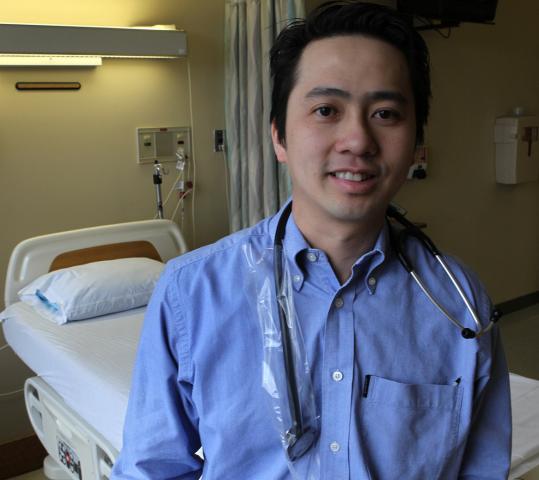 LOWELL — Like many of his peers, Lowell physician Richard Ma has repeatedly plunked the listening end of his stethoscope into a latex glove before examining a patient with a suspected communicable disease at Saints Medical Center.

But the improvised cover not only muffles the scope’s sound, it’s as awkward as it is pointless, he said, creating only the illusion of sterility.

“There’s a false sense of security when you use gloves, honestly,’’ said Ma, 40. “You take 10, a bunch fall out on the floor, and you put nine back. So I thought, ‘I’m putting a glove on my stethoscope anyway. Why not make it simpler?’ ’’

Enter the Stethguard — invented and named by Ma — which slides up the scope’s neckpiece. The necktie-shaped plastic sheath will soon compete for space alongside boxes of latex gloves, gowns, and masks on Saints’ hospital room doors this spring. And while it’s one more to-do for already harried medical staff and an addition to the array of stethoscope covers already available, the barrier may offer ammunition in the fight to reduce hospital-acquired infection. At least that’s Ma’s hope.

There was a time when infections acquired during hospital stays were considered unavoidable. By late 2008, approximately $15,300 more per patient was spent to battle the infections, according to the US Department of Health and Human Services. Of the 1.7 million Americans who contract infections in hospitals each year, about 100,000 die from them, according to the department.

While it’s unclear how often medical staff and their instruments spread disease, what’s increasingly understood is the range of surfaces to which germs adhere, including unwashed hands, privacy curtains, and blood pressure cuffs. Many British hospitals have already banned doctors from wearing neckties and white coats, and the American Medical Association is studying the link between hospital dress codes and the spread of infection and could make new recommendations on attire as early as this summer.

But the stethoscope isn’t so easy to shed.

The Centers for Disease Control and Prevention advises stethoscope cleanings between patient exams and the use of dedicated room equipment for patients carrying a communicable disease and in isolation. But adherence is sometimes lax. Many shun cheap, ill-functioning dedicated stethoscopes in favor of the one slung about their necks. And scope-cleaning is hardly routine.

“The truth of the matter is that people don’t do it,’’ said Ma. “It’s never mentioned beyond medical school, and that’s where it stops.’’

Some say Ma’s invention can be sidestepped in favor of strict adherence to hand washing and regular stethoscope cleaning. But with compliance rates hovering between 45 and 50 percent, according to the American Journal of Medical Quality, there may be room for one more protective layer.

“I’m a big believer in . . . hand hygiene,’’ said David Hooper, head of infection control at Massachusetts General Hospital, “but certainly other things can help. I’d have to know more details to see if we wanted to try it.’’

For now, Stethguard’s pilot program at Saints will come with its own battery of tests. Infection control nurse Diane Maltais plans to culture shielded stethoscopes post-exam to determine their bacteria load. But first she’ll work to get staff there to integrate the extra step into their routine, which may initially prove the biggest barrier of all.

“We’ve found our stethoscopes to be a huge source of contamination,’’ said Maltais, “so I think he’s really onto something good. But it will be interesting to see everyone’s response to it. I’m curious to get them out.’’

For Ma, Stethguard’s introduction at Saints marks his first step away from a project that has sapped four years and more than $100,000 from his savings. He paid for the “first run’’ of 100,000 Stethguard covers, and hopes a company will agree to take over mass production, leaving him to simply be a doctor.

Or, at least until he moves on to his next idea.

“I want this out of my hands,’’ said Ma, who is now thinking about producing plastic gloves on a roll, perforated like produce bags. “So I can get on with this next thing.’’