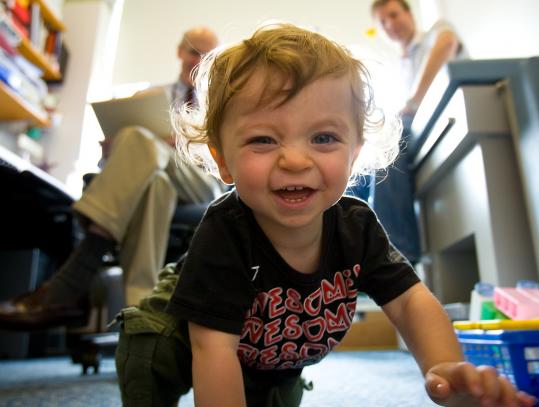 Oliver Siminoff crawled on the floor during an appointment with Dr. Gerard Berry, an expert on galactosemia, at Children’s Hospital. (Dina Rudick/Globe Staff)
By Carolyn Y. Johnson Globe Staff / August 31, 2009

For three decades, Dr. Gerard T. Berry has studied a rare, potentially lethal genetic disease that makes milk poison to an infant. Still, it’s difficult for him to know exactly what life will be like for 1-year-old Oliver Siminoff, a ferocious crawler with a penchant for high-fives.

The disease can be treated with a special diet, but patients like Oliver face a wide gamut of future problems, ranging from menopause in their teens to cognitive problems.

“That’s almost the worst part. If a kid has other things, they know what’s going to happen. With him, it seems like a lottery,’’ Jamie Siminoff, Oliver’s father, said during a recent appointment in Berry’s office at Children’s Hospital Boston.

In an attempt to unravel some of those unknowns, 35 patients came to Boston this month for a two-day battery of tests and to meet with an international panel of doctors, part of the largest-ever comprehensive clinical study of adults with the disease, called galactosemia.

The study - primarily funded by the patient advocacy group, Parents of Galactosemic Children, and made possible by the willingness of patients to pay their way to Boston - is just one example of the ways in which families and patient groups are driving scientific research on rare diseases.

“Initially it was a wonderful thing just to find somebody who has the same disease,’’ said Mary Dunkle, vice president of communications for the National Organization for Rare Disorders, an advocacy organization. “Now, people have done that and they’re ready to move on to the next level: What can we do beyond that? You get 35 people together in a room with a rare disease; that’s a rare thing, and you don’t want to waste it.’’

There are more than 6,000 known rare diseases, defined as those that affect fewer than 200,000 people in the United States. Last year, Children’s Hospital received a $25 million gift from the Manton Foundation for a center devoted to studying these diseases, often caused by genetic abnormalities. But which of these ailments gets the attention of researchers depends, in part, on the dedication of families.

For example, the Progeria Research Foundation, based in Peabody, has raised money to fund clinical trials for progeria, a fatal disease that causes accelerated aging in children.

And families and foundations have supported a consortium of local researchers and others working on gene therapies for Tay-Sachs disease with a $600,000 grant, which this month helped the researchers win a $3.5 million National Institutes of Health grant to bring animal research to the stage where it is ready for human clinical trials.

“There’s a two-pronged approach: one is the support group so they can share their individual experiences, while at the same time realizing that the funds that are raised are going to try and help alleviate and target the disease,’’ said Tom Seyfried, a biology professor at Boston College involved in the Tay-Sachs Gene Therapy Consortium.

Galactosemia, a rare metabolic disorder, affects about one in 50,000 children and causes galactose, a sugar found in human and animal milk and other foods, to build up in the blood, causing harm to the brain and other vital organs. If the disorder is unrecognized at birth, infants often die.

Because of screening that began about three decades ago, most babies with galactosemia can be switched to foods that are safe - though they still suffer a range of neurological or fertility problems that scientists are struggling to understand.

The disease affects so few children that little is known about the full scope of its symptoms. When talking with families, doctors often must rely on individual patients’ experiences - a man in the Netherlands who fathered children, a handful of women with the disease who were able to get pregnant, for example.

“I would go to the pediatrician, and he would say to my mom and dad, how’s she doing? It’s almost like they were trying to learn together,’’ said Maureen Bell, 37, who traveled from Philadelphia to participate in the trial at Children’s Hospital.

Among the questions scientists hope to answer by studying Bell and the other adults who came to Boston from across the United States is whether screening if newborns has reduced the chronic complications of the disease.

Some of the patients, including Bell, were born at hospitals where screening was not done. Bell’s condition was discovered only when her mother, about to take her baby home from the hospital, noticed she was turning yellow.

Bell said that she went through menopause - hot flashes and all - at age 18 and had learning problems throughout her childhood.

And it was not until she was 18 that she first walked into a room where she was not the only one with the disease. She is one of the older people with the disease, probably because most of its victims used to die as babies.

“I was one of the luckier ones,’’ Bell said. Aside from a slight tremor in her hands, there is no sign of the disease to a casual observer.

Young Oliver Siminoff seems to be doing well, too, but many of the cognitive problems associated with the disease, including language difficulties, don’t emerge until a child is older.

He underwent cognitive testing during his recent visit to Children’s from his home in California. Psychologist Susan Waisbren tested Oliver with simple tasks, such as ringing a bell, putting a block in a cup, or finding a bracelet hidden under a washcloth. His parents watched intently, cheering their son when he did a difficult task correctly.

Berry, the galactosemia specialist, is hoping that research - including work with stem cells that the Siminoff family plans to fund - might elucidate some of the biological underpinnings of the disease and help scientists understand certain brain disorders.

“The lessons learned from this experiment of nature - this inborn error of metabolism, galactosemia - may help us uncover some of the secrets of how the brain functions,’’ Berry said. “And how it becomes dysfunctional when its wires get crossed.’’