Sector’s uncertainties and expenses are driving away investors 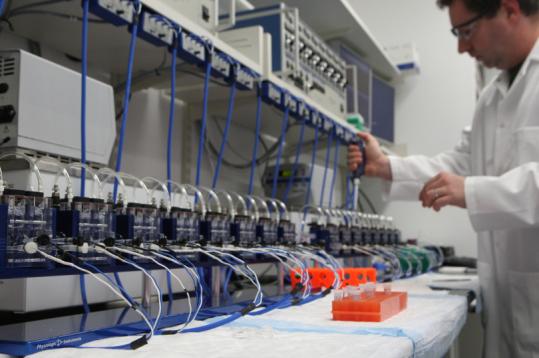 Scientists at Epix Pharmaceuticals Inc. of Lexington have been working on treatments for Alzheimer’s disease and other ailments. (Dominic Chavez/ Globe Staff/ File 2008)
By Robert Weisman Globe Staff / July 22, 2009

Epix Pharmaceuticals Inc. has become the second Massachusetts biotechnology company in the past week to fold, raising fresh concerns about the health of the sector.

The cash-starved Lexington company, which had been working on treatments for Alzheimer’s disease and other ailments, yesterday confirmed it was moving ahead with “an orderly liquidation’’ of its assets after failing to find an acquirer or obtain additional financing to stay afloat. The company’s shares were delisted by the Nasdaq stock exchange on May 14 when it was unable to pay fees required to meet listing obligations.

Last week, Cambridge biotech Biopure Corp. filed for Chapter 11 bankruptcy protection. Biopure, which was developing a human blood substitute, plans to sell most of its remaining assets to OPK Biotech LLC of Delaware.

With many investors souring on biotechnology, and the cost of capital rising for the industry’s expensive research and development, more companies are being forced to pull the plug before they can bring new drugs to market, industry watchers said yesterday.

“You’re seeing a squeeze across the board,’’ said Kevin J. Gorman, managing partner of Putnam Associates, a Burlington consulting firm specializing in life sciences. “There’s not a lot of financing for biotechnology companies right now unless they have a really good product that’s close to going to market.’’

The funding crunch is affecting public companies like Epix and venture-backed biotech start-ups requiring additional money for drug development and clinical trials, Gorman said. “Investors are dialing back their appetite for risk,’’ he said, noting that uncertainty over national healthcare reform and understaffing at the Food and Drug Administration are contributing to delays and rising costs. “Unfortunately, there may be more [shutdowns] before the end of the year,’’ he said.

Epix, which had been collaborating with pharmaceutical giant GlaxoSmithKline on an Alzheimer’s drug, had about 90 employees at the end of 2008, but has since cut its staff to conserve cash. In April, it said that it might be forced to file for bankruptcy protection if it couldn’t restructure its debt. It also hired investment bankers to seek a merger partner or some other strategic alternative, but those efforts proved unsuccessful.

In a statement yesterday, the company said it transferred its assets to a private fiduciary, certified public accountant Joseph F. Finn of Wellesley, in a so-called assignment transaction. The transaction, an alternative to court-supervised bankruptcy, is a common law contract intended for the benefit of creditors. It was completed Monday.

“It is with great disappointment that the company must proceed with this decision,’’ Epix chief executive Elkan Gamzu said in a statement. “Over the past several months, we had taken several actions in an effort to improve the financial health of Epix.’’

Finn, founding partner of the Finn, Warnke & Gayton accounting firm in Wellesley, said he planned to notify creditors that he had been designated to dispose of Epix’s assets. He said he hoped to auction off the company’s lab equipment and other physical assets by the end of the summer and sell its intellectual property, including patents and clinical studies, by mid-September. With those funds, Finn said, he hoped creditors could be partially repaid within six months.

At least three other biotech companies have liquidated their assets in similar private assignment agreements over the past two years, Finn said, including ActivBiotics Inc. of Lexington, Spherics Inc. of Mansfield, and Prospect Therapeutics Inc. of San Diego.

“There’s a lot of biotechs around, and some are running out of money,’’ he said. “You need deep pockets to fund therapeutic drugs. These companies don’t have sales and they’re expense generators.’’