Partners' leader questioned on outside ties 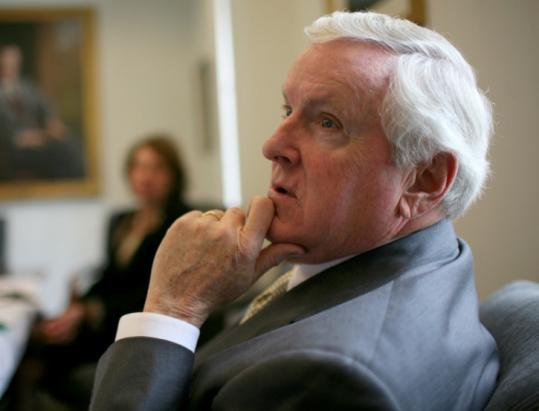 Though he has no background in medicine, Connors has been Partners' chief overseer, champion, and its most public face for 13 years.

And when the private interests of its board of trustees - a constellation of Boston's power elite - intersect with the interests of the company, as they steadily have, he has ultimate authority over which business entanglements must be disclosed to government officials who regulate nonprofit organizations like Partners.

One board member is a partner with the firm that handles much of Partners legal work. Disclosed.

Another is a top executive at Partners' principal bank. Disclosed.

Still another is the cofounder and chairman emeritus of Partners' advertising firm. That would be Jack Connors. And that potential point of conflict has been disclosed as well.

But to the chagrin of some former board members, never brought up for board review was Connors's stake in a leading medical education firm whose sale in 2004 made Connors a very wealthy man.

Nor has the board notified public officials of Connors's ownership of a fledgling home healthcare firm that has directly solicited Partners' hospitals for business.

Connors and top Partners officials defended the decision not to publicly disclose Connors's potential conflicts, saying that because Partners did not directly contract with either of Connors's firms there were no conflicts to report. Connors also defended his right to be an entrepreneur in the healthcare business while also chairing Partners' board, and strongly denied ever using his position for personal or financial advantage.

The larger company, M/C Communications, grew to become the biggest commercial provider of continuing education to physicians in the decade between its inception in 1994 and when Connors sold it in 2004. It profited hugely from an exclusive commercial relationship it maintained with Harvard Medical School, whose faculty teach at seminars the company holds. Partners' signature institutions, Massachusetts General Hospital and Brigham and Women's Hospital, are major teaching affiliates of Harvard Medical School.

In addition, M/C Communications benefited financially from millions of dollars in sponsorship revenue paid it from major pharmaceutical firms eager to play to this professional audience. The role of pharmaceutical firms has been controversial in the medical profession and inside Harvard Medical School. Critics contend it calls into question the school's traditional standard of offering independent, unbiased medical education; others in the continuing medical education business say such fears are unwarranted or overblown.

Connors said he was under no obligation to disclose his ownership of M/C Communications to the Partners board. He said that while there is an "affiliation" between Harvard Medical School and the two Partners hospitals, there is no formal contract between them. Under state and federal law, nonprofit organizations must report annually those instances - officially called "related party transactions" - in which a director of the nonprofit is doing business with the nonprofit.

Connors said he informed Partners executives of his ownership of M/C Communications, and that they determined it did not warrant disclosure to the full Partners board.

"There is no contract between Partners and Harvard," Partners said in a statement to the Globe.

Connors made a name for himself as an executive with Hill, Holliday, Connors, Cosmopulos, the Boston advertising company that he helped found and guided throughout a long career. Less well known is that he made most of his fortune from M/C Communications, which he sold to Bain Capital for $450 million in 2004.

The sale was the largest of a private healthcare-related company in Massachusetts that year, according to TM Capital Corp., an investment banking company. Connors, who led an investor group that bought the firm outright for $13 million in 2000, made about $250 million from its sale.

Three former members of the Partners board told the Globe they should have been asked to decide whether Connors's ownership needed to be reported to the Internal Revenue Service and the state attorney general's office. The former board members declined to be quoted by name.

Other specialists agreed with the former board members' concerns.

W. Michael Hoffman, executive director of the Center for Business Ethics at Bentley University and a specialist in corporate conflicts of interest, said Partners officials should not have unilaterally decided to forgo the board's guidance on how to deal with Connors's ownership of M/C.

"That's not good governance," said Hoffman, noting that M/C's relationships with Harvard Medical School and the pharmaceutical industry were close enough that Partners trustees should have discussed it. He said the board could have placed restrictions on Connors's private ventures or even demanded that he choose between his for-profit enterprises and his nonprofit chairmanship. Or, he said, after vetting the issue, the board could have decided to take no action.

"People are going to think that the trustees have either a laissez-faire or old-boy network attitude toward conflicts of interest," Hoffman said. "And Partners can only lose with that attitude out there."

Former Massachusetts attorney general Scott Harshbarger echoed Hoffman's criticisms of the Partners board. For Harshbarger, who toughened conflict-of-interest rules for nonprofits during his tenure as attorney general, the issue was the large number of Partners trustees who have financial ties to the company. Although a 2007 study by the Center for Healthcare Governance, an affiliate of the American Hospital Association, recommended that healthcare nonprofits ideally should prohibit board members from having financial ties to the company, nine of the Partners' 16 trustees in 2007 were executives for firms that do business with Partners, according to documents filed with the attorney general's office. The boards that oversee other major teaching hospitals in Boston had relatively fewer members with such conflicts, state records show.

"The Partners board is entirely volunteer, and composed primarily of individuals who are trustees of our hospitals and as well as physicians," Partners spokesman Rich Copp said in an e-mail to the Globe. "They are civic and business leaders of consequence. As you know, they do not make purchasing decisions for the organization, and we manage potential conflicts through our disclosure process."

Connors brushed aside the notion that a perceived conflict could undermine trust in Partners' board members. He insisted that no one on the board has ever personally solicited business from Partners or any of its affiliates on behalf of the companies they represent. As for himself, Connors was adamant.

"I am a businessman who has over the years made millions of dollars, but I have also learned well that the strength - and joy - of any reputation is measured by its integrity and good works," Connors wrote to the Globe.

Senior officials at Partners, including its chief executive and general counsel, declined to be interviewed for this story.

M/C Communications is not the only for-profit healthcare-related venture that Connors has owned during his Partners chairmanship. After his 2004 windfall, he founded a company that helps elderly patients readjust to life at home after a hospitalization.

That company, Dovetail Health, has - Connors acknowledged - solicited business from hospitals owned by Partners. And Connors confirmed that after Dovetail executives failed to convince Blue Cross Blue Shield of Massachusetts to contract with the firm, he personally spoke to the giant insurer's president, Cleve L. Killingsworth, on Dovetail's behalf. Partners and Blue Cross Blue Shield regularly negotiate over $2.5 billion worth of medical business a year.

Connors acknowledged in an interview that it might have appeared "inappropriate" to some for him to pitch Killingsworth. But he said the conversation stemmed from a shared belief that new ways must be found to reduce frequent return trips of elderly patients to the hospital. More recently, however, he said he does not believe his approach to Killingsworth was inappropriate.

Partners executives said, in an unsigned e-mail response, that because no deal was ever been struck between Dovetail and Blue Cross, it saw no violation of the company's conflict-of-interest policy.

While Connors was and is an active player at Dovetail, he describes himself as a passive investor during his years of ownership of M/C. He said, for instance, that he never spoke with Dr. Joseph Martin, then dean of Harvard Medical School, whom he describes as his friend, about anything to do with the firm.

Which isn't to say he didn't realize how important the Harvard tie had been to M/C's success. Shortly after the 2004 sale of the company to Bain Capital, Connors made that clear with a $5 million contribution to the school.

"I just really appreciated what had gone on and wanted to show some appreciation," said Connors, who was quickly elevated to chairman of the medical school's fund-raising committee, a position he held until April 2008.

Was he referring to how the Harvard affiliation had helped M/C blossom, Connors was asked.

"Yes, but no one ever asked me for a gift," he replied.

Stephen Kurkjian, a former Globe reporter and editor, can be reached at kurkjian@globe.com.