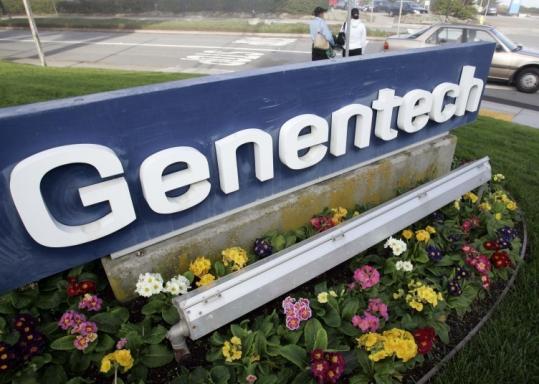 WASHINGTON - A decision expected today on federal approval for Genentech's Avastin cancer drug could have ramifications for all companies developing cancer medicines.

Genentech made its case for Food and Drug Administration approval of Avastin using a widely debated measure of drug effectiveness that focuses on tumor growth, not patient survival.

Industry executives are closely watching the decision to see whether the measure will pass muster with federal regulators.

Approval is far from certain, and many experts say the agency may delay a decision until later this year.

Avastin is already approved for advanced colon and lung cancer and was Genentech's best-selling drug last year, accounting for $2.3 billion in revenue. An additional use for advanced breast cancer patients who have not had chemotherapy would drive new revenue for the company.

In December, a panel of outside FDA advisers voted 5 to 4 against Genentech's application, arguing the drug's benefits did not outweigh dangerous side effects. The FDA is not required to follow the panel's advice, but it often does.

At issue is how the agency judges the effectiveness of cancer treatments. Traditionally, the FDA only approved cancer drugs that extended the lifespan of patients. However, in recent years companies have studied alternate measures of a drug's effectiveness. One of the most controversial measures is so-called progression-free survival, or how long the drug halts the spread of cancer.

Genentech has argued that stopping tumor growth benefits patients physically and psychologically, even if it doesn't increase life expectancy. But many experts are skeptical.

"Why would it improve your quality of life to know that you have no disease progression if you still aren't going to live any longer?" asked Dr. Kay Dickersin, director of the Center for Clinical Trials at Johns Hopkins University.

Dickersin said that if the FDA approves Avastin based only on slowing tumor growth, it could lower the bar for future drug approvals.

"Unfortunately, there was no real quality-of-life measurement in this study," said Brawley, who previously served on the FDA's panel of cancer experts. "My interpretation of FDA bylaws is that I cannot approve a drug based on disease-free survival unless I have evidence of improved quality of life."

But those drugs were approved for patients who had already failed to respond to other therapies. Genentech wants Avastin approved as a first-in-line treatment for breast cancer.

Schenkein argues that delayed disease progression has advantages to overall survival as a study goal.

"A trial that has to wait to record overall patient survival will take many more years and be much larger," said Schenkein. He added that companies may be able to bring more medicines to market faster using goals besides survival.

Given the tough medical and ethical questions surrounding Avastin, Stanford Group analyst Gregory Frykman says there is a 40 percent chance the FDA will delay a decision to review new data expected from Genentech later this year.

Regardless of when the FDA makes a final decision, he writes, "it will provide insight into the agency's tolerance for a nonsurvival endpoint" for the approval of new cancer drugs.