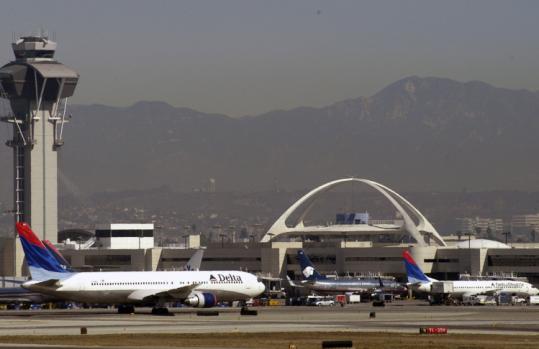 Los Angeles International and other US airports can now compete with each other via landing fees tied to time of day. (Jamie Rector/Bloomberg News/File 2005)
Email|Print| Text size – + By Associated Press / January 15, 2008

WASHINGTON - Congested airports can charge landing fees based on the time flights land and on traffic volume instead of on the plane's weight, according to a federal policy introduced yesterday.

Transportation Secretary Mary E. Peters said the policy will make it easier for airports to reduce delays by encouraging airlines to spread their flights more evenly throughout the day.

Some analysts said that while new fees will encourage competition between airports, consumers ultimately will foot the bill.

Airline arrival rates through November were the second-worst since the collection of comparable data began in 1995, the Transportation Department said this month. The new policy will encourage congested airports to include the cost of projects designed to expand capacity in the new landing fees now instead of after construction has been completed, Peters said. The policy also will allow operators of multiple airports, such as the Port Authority of New York & New Jersey, to distribute landing-fee revenue among facilities, she said.

But the Port Authority, which runs John F. Kennedy International Airport, LaGuardia, and Newark Liberty in New Jersey, said the new policy is a minor fix for a major problem. Through November, its airports had the lowest on-time arrival rates, and aviation officials say delays there cascade throughout the system, causing 75 percent of the nation's flight delays.

"It's good the [Federal Aviation Administration] is focusing on the delays issue, but these small steps don't address the fundamental problem when dramatic action is needed," according to a Port Authority statement. "The right solution is expanding capacity through 21st century technologies, working with the airlines on more rational schedules and better customer service."

The Air Transport Association, which represents airlines, cast the policy as "congestion pricing disguised as airport fee," and echoed the need for a comprehensive fix.

"Unfortunately, [the policy] does nothing to fix the primary cause of delays - our nation's increasingly antiquated air traffic control system," ATA CEO Jim May said. "Additional fees . . . will only increase the cost of flying for the consumer."

But, the association representing airport owners and operators welcomed the change, lauding Peters for recognizing that "airport proprietors are in the best position to manage the use of the facilities."

"The best part about this is that it opens up competition among airports," said Terry Trippler, a travel specialist.