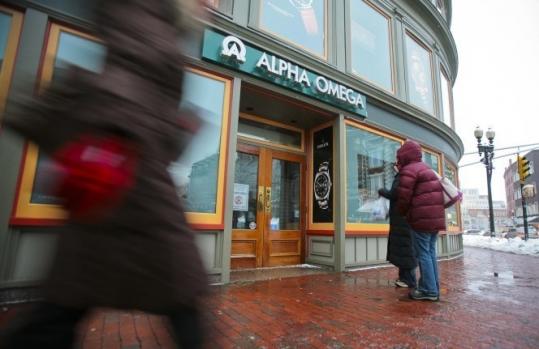 Alpha Omega Jewelry filed for Chapter 11 bankruptcy late last night while the Cambridge-based retail chain's owners, who hastily left the country for their native India in a shroud of mystery days before Christmas, remained abroad, according to a company lawyer.

Richard E. Mikels, a partner at the Boston law firm Mintz Levin Cohn Ferris Glovsky and Popeo, said his firm filed the paperwork at around 10:40 p.m. with the US Bankruptcy Court for the Eastern District of Massachusetts after the luxury store's owners and sole directors, Raman and Nilda Handa, unanimously voted to do so.

The bankruptcy filing kicks off an auction for Alpha Omega's assets, with the first bid placed by Tiger Capital and Gordon & Co. at 70.25 percent of the cost value of the inventory. Mikels did not know the dollar value of the jewelry store's inventory nor how much debt Alpha Omega had accrued.

But the company's unpaid bills had been mounting for at least six months. Representatives of the LaSalle Business Credit arm of Bank of America Corp. took possession of Alpha Omega's inventory on Dec. 22, a few days after the Handas and their two grown children who work for the family business disappeared without notifying relatives or business associates.

The company is asking the court to auction off the assets around Jan. 22, and until then employees and customers can expect "business as usual" at the four Greater Boston shops.

Mikels said consumer programs and employee benefits will continue as before under a loan by LaSalle.

Alpha Omega jewelry stores have attracted high profile customers over the years, including film star Ben Affleck, former Red Sox pitcher Pedro Martinez, and former President Clinton. In addition to the flagship store in Harvard Square, there are Alpha Omega stores in Boston's Prudential Center, in the Burlington Mall, and in the Natick Collection mall.

Raman Handa's business problems led him to rely on his personal assets to bolster his jewelry stores. In November, he pledged his $2 million home in Lexington as collateral for business financing that the Alpha Omega parent company, Lexington Jewelers Exchange, had signed with LaSalle Business Credit, according to the South Middlesex Registry of Deeds.

Middlesex County records show Handa remortgaged his house and a second piece of property he owned about a dozen times in the last 11 years, often for million-dollar-plus sums. Some refinancings were for lines of credit, including a $350,000 line from National City Bank.

Leader Bank of Arlington was another frequent supplier of the loans to the Handas. Handa also used his home in a $2.4 million business financing that Alpha Omega negotiated with Middlesex Savings Bank in 2002. Many of the loans were repaid or refinanced.