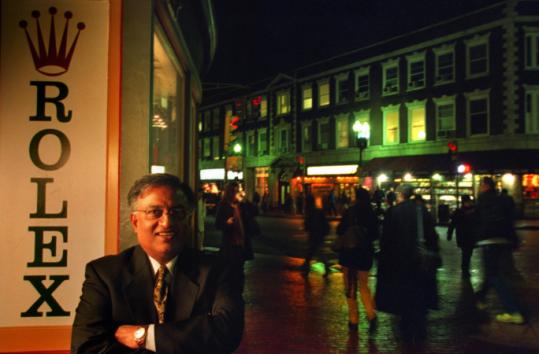 The owner of the Alpha Omega jewelry store chain reportedly left the country amid signs that the prominent seller of watches and diamonds was struggling with financial problems.

According to a report on Boston Magazine's website, Raman Handa returned to his native India with his family on Saturday after several weeks of rumors about his business's financial health. It quoted Radwan Kheireddine, senior manager of the chain's flagship store, as saying representatives of a consulting group working for a bank had come into the store and inquired about inventory.

Alpha Omega had until recently been a major advertiser in several area media outlets, including The Boston Globe and Boston Magazine. But Dan Scully, Boston Magazine's president, said he started refusing Alpha Omega ads over the summer because the company had fallen behind in its payments.

Scully said yesterday that he had seen a memo sent to employees of Alpha Omega indicating that Handa had returned to India for health reasons. Alpha Omega is based in Cambridge and has stores in Harvard Square, in the Prudential Center in Boston, in the Burlington Mall, and in the Natick Collection.

Kheireddine didn't return phone calls to the Cambridge store yesterday. Representatives at all four stores said they were open for business as usual at the peak of the Christmas shopping season, although the store at the Prudential Center closed hours earlier than other shops in the mall and workers inside covered display cases with sheets. Store officials referred inquiries to the chain's corporate offices. Calls and e-mails to the office, to the Alpha Omega publicist, and to members of the Handa family weren't returned.

But a salesperson at one store, speaking on condition of anonymity, said that workers were called together by their manager after they clocked out on Tuesday and told "something is going on" and "in a couple of days we will find out if we are going to have new owners or if the stores will be closed."

That employee had not seen any memo about Handa leaving the country and said that it was business as usual yesterday. There were unfamiliar people working in the store, and the staff assumed that they were assessing the site for a bank or an insurance company. "We were told, 'The store will be closed on Thursday. But show up for work on time on Friday.'

"Personally, I'm sick to my stomach over what happened," the employee said. "I hope somebody buys the place and we all have jobs."

Raman Handa, who opened his first jewelry store in Harvard Square in 1980 and grew it into the leading retailer of high-end watches in New England, was a fixture on the Boston social scene, hosting charitable events and sponsoring professional teams like the Red Sox and Celtics.

At the Handa home in Lexington yesterday, a $2 million estate with arcade columns set on nearly two acres, the circular driveway had been cleared but no path had been shoveled to the doors. Three snow-covered cars - a Mercedes, an Audi, and a Mini Cooper - were parked between the garage and a basketball hoop. A fourth car, a Toyota parked in front of the house, was not covered in snow. No one answered either door, and there appeared to be no lights on.

"They've been fine neighbors," said William Widnall, who lives next door. "I hope it's just a silly rumor."

Alpha Omega has been a highly visible advertiser in Boston area newspapers and magazines, often employing "co-op advertising," in which the cost is shared by a watchmaker, such as Rolex, whose product is being featured in the ad, representatives of media companies said. The jewelry store chain has been among the top advertisers in Boston Magazine in 2007 and had been the single largest advertiser in the magazine in previous years, Scully said.

But Scully said he had cut off the Alpha Omega account in June because the chain had stopped paying its bills. Handa offered to renegotiate to pay a smaller amount, saying he had run into financial difficulty because of an investment in new inventory, Scully said.

"I told him that it would be a good idea to take a break and come back later when he was in a better financial condition," Scully recalled. "I told him I didn't want him to incur any further debt."

Scully wouldn't specify the size of the debt.

Alpha Omega has also been a substantial advertiser in the Globe and is featured in a promotion posted on the newspaper's website, although its ads recently stopped appearing in the Globe. Peter Ockerbloom, vice president of display advertising at the Globe, said, "Alpha Omega has done business with the Globe for many years, and it is our policy not to comment on our relationship with our customers."

Asked if any investigations of Alpha Omega are pending, Attorney General Martha Coakley's office, the FBI's Boston office, and the US attorney's office in Boston said that they cannot confirm or deny investigations.

One vendor who said he is owed $800 by Alpha Omega said the company had been facing financial pressures due in large part to high rent at its Harvard Square store and increased competition from other jewelers.

Key shifts in the marketplace have made it increasingly hard for independent jewelers to survive. Like other retailers, jewelers suffered after the Sept. 11, 2001, terrorist attacks, and chain merchants grabbed a greater share of the jewelry market. Boston icon Shreve Crump & Low filed for bankruptcy protection last year after the business unraveled.

And local jewelers have faced growing competition from designers looking to get a piece of the retail market as consumers become increasingly brand driven. In the last year, David Yurman opened a boutique at Copley Place. Several months ago, luxury watchmaker Tourneau opened a store in Natick, just a few years after launching a Boston boutique.

Some competitors yesterday said they were shocked at reports of Handa's departure. "He's a great guy and a generous man," said Jack Winer, vice president at Shreve, Crump & Low in Boston, who once worked for Handa. "He did a phenomenal job with his business, and he sets the standard for watch retailing nationwide."