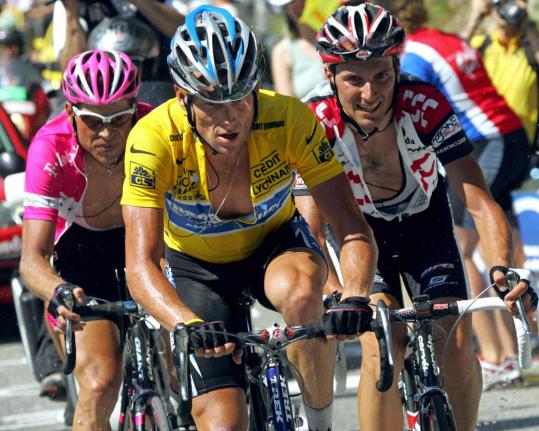 NEW YORK - Scientists at Sirtris Pharmaceuticals Inc. say they have created a drug that mimics the ingredient in red wine linked to longevity and the cell structures that power endurance athletes like cycling champion Lance Armstrong.

The new molecule is 1,000 times more potent than the wine derivative, resveratrol, and could lead to solutions for diseases of aging, including cancer and diabetes, according to authors of a study in today's issue of the journal Nature.

Researchers tested about 500,000 molecules for abilities to activate the immune-system booster SIRT1, the enzyme credited with resveratrol's ability to extend lifespans 30 to 70 percent in organisms from yeast and worms to flies and mice.

Human testing on the most promising ones will begin next year, said David Sinclair, an author of the study.

"These are real drugs. This is not something out of red wine anymore," said Sinclair, a professor of pathology at Harvard Medical School and cofounder of Cambridge-based Sirtris. The study is "proof of a principle that you can put something into the food supply that will ward off and treat the diseases of aging in a single pill."

Sirtris's stock rose 7.8 percent to $18.38 yesterday. The company, which went public in May, had seen its share price climb 71 percent through Tuesday.

Mice and rats given three of the molecules responded like those in other experiments testing extreme calorie-restricting diets, even though the rodents continued to eat and weigh the same. They showed increased insulin sensitivity, lower blood-sugar levels, and more powerful mitochondria, the "power packs of the cell" that diminish with age.

"That's where it gets interesting," Sinclair said.

If you give resveratrol to a normal mouse, it can run twice as far because it has many more mitochondria, he said. Seven-time Tour de France winner Lance Armstrong has extra mitochondria that power his endurance abilities, Sinclair said.

"The goal is not to make Lance Armstrongs of everyone, but you can imagine that it would boost the energy of someone who is frail and weak," Sinclair said.

Sirtris has about 140 patents and patent applications related to the so-called aging gene, and some of the most effective treatments for boosting SIRT1 were discovered after the Nature study was submitted for publication a year ago, Sinclair said. Results from animal studies of those drugs will be released next year, he said.

Sirtris was founded by Sinclair, chairman of its scientific board, and Christoph Westphal, the chief executive, to study activators of SIRT1 and its related class of enzymes. Other treatments for diseases of aging rely on complicated technology that may take years to develop, Westphal said.

The sirtuin gene was first reported by Leonard Guarente, a biology professor at Massachusetts Institute of Technology whose lab also discovered the aging benefits of restricted diets in mice. Sinclair, his post-doctoral student at the time, moved to Harvard in 1999 to develop drugs that could act in the same way. He discovered resveratrol in 2003.