Auctioneer expects to return in '08

Foreclosures likely to mount by May 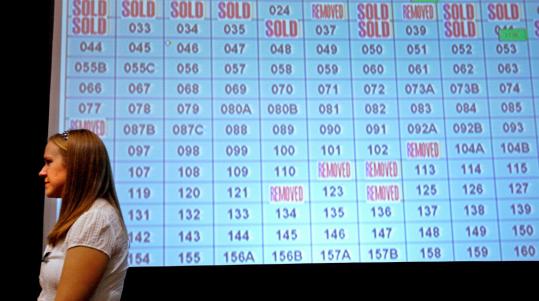 The company that auctioned nearly 300 foreclosed homes in Boston this past weekend expects to return in the spring to sell more troubled properties.

Real Estate Disposition Corp. said only a few of the homes it put on the block at the Hynes Veterans Memorial Convention Center failed to sell. The two-day auction attracted almost 4,000 registered bidders. The firm declined to disclose details on individual sales.

Senior vice president Michael Schack said the company would return as soon as the supply of foreclosed homes is replenished. He said that could happen by May.

His firm also has auctions scheduled for Dallas, Houston, Las Vegas, and Phoenix, as the crisis in subprime mortgage has fueled a record number of foreclosure proceedings nationwide as well as in Massachusetts.

The Federal Reserve Bank of Boston has reported that nearly 5,000 properties owners in Massachusetts lost their homes to foreclosure by August. The homes that were auctioned off last weekend were largely remainders - properties that lenders were unable to resell through traditional channels, such as real estate brokers. Many were also in disrepair, with moldy basements, burst pipes, and other damage that made them hard to sell.

Auctions are more common these days, not just for foreclosed homes, but for listed units that aren't selling because of the general slowdown in the real estate market. Declining real estate prices have led some people to postpone buying a home, industry participants say.

"The goal of an auction is to get them off the sidelines and back into the game," said Robert Cole, president of the Collaborative Companies. "It lets them see that other people are also ready to buy."

The developer, National Development, recently completed the project, but had sold only 42 of 127 units. Enter Cole's company, which holds auctions under the name Velocity Marketing.

Cole said in addition to the 17 auctioned units, Velocity sold nine other units in the building to people who were attracted by the auction.

"We got a lot of people to the property who wouldn't have seen it otherwise," he said.

The roughly 60 remaining unsold units will now be reduced to about 78 percent of previous list prices.

"The developer feels that the market has spoken," he said.

Other developers are taking a similar approach. One of the latest: A mid-December auction of 45 condos in Middleton, in a project called Ironwood on the Green at Ferncroft.

Some people who came to the auction of foreclosed homes at the Hynes said prices still seemed high. But there was little evidence of buyer's remorse among those who did buy.

Melissa Ferreira won the bidding for what she called "my dream home," a three-bedroom in Bourne for $330,000. She plans to move in at the end of the month.

Binyamin Appelbaum can be reached at bappelbaum@globe.com.