Full coverage not likely in 2008 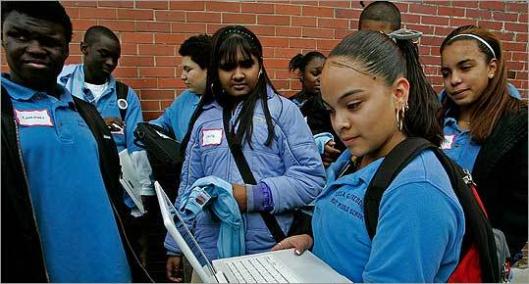 Boston's push for citywide wireless Internet access, delayed by technical challenges and slower than anticipated fund-raising, is no longer expected to meet the city's original goal of blanket coverage by the end of next year, project leaders conceded.

Citywide deployment is now "unlikely in 2008," said Pamela Reeve, chief executive of OpenAirBoston, the nonprofit corporation established by the city to manage the program. A pilot WiFi project once scheduled to launch last June in a square-mile area of the Grove Hall neighborhood, straddling Dorchester and Roxbury, won't be running at full capacity until later this month.

The city's plan, unveiled by Mayor Thomas M. Menino on July 31, 2006, marked a departure from WiFi models used by other cities, which turned over responsibility for their wireless networks to outside companies, such as Internet service providers. Boston opted to form an independent organization to own and operate its WiFi network, offering access to multiple Internet providers. The city planned to raise $16 million to $20 million in donations from businesses and foundations to build it.

But fund-raising has been difficult, project managers acknowledged, and the fund-raising goal has been scaled back to between $12 million and $15 million. "We've been looking at ways of making it less expensive as we build out the network," Reeve said. While officials declined to say how much they have raised, the Grove Hall wireless loop was built with "hundreds of thousands of dollars" worth of contributions of time and equipment from private contractors such as Internet service provider Galaxy Internet Services and BelAir Networks, which sells wireless routers.

Once the Grove Hall pilot is fully operational, city officials and OpenAirBoston hope to use it as a "proving point" for fund-raising that will extend the WiFi network to other neighborhoods. Other big cities have encountered problems with signal disruption, including San Francisco and Los Angeles, which have WiFi operating only in pockets, said Tim Scannell, president of Shoreline Research, a wireless consulting firm in Quincy. Scannell said some cities, and their financial backers, have been delaying s until a more powerful, longer-distance wireless technology, called WiMax, becomes commercially available in the coming decade.

WiFi, or wireless fidelity, technology enables laptops, cellphones, handheld computers, music players, and other devices to connect to the Internet via radio waves, letting everyone transmit and receive information on the go.

"In general, Boston has been pretty lethargic about getting this going," Scannell said. "One of the problems is that WiFi is a very fickle technology. You could be sitting next to a wireless router and not get any signal, or you could be 30 feet away and get a strong signal. The signals will bounce off people, buildings, trees, and elevator shafts."

Despite the delays, the Grove Hall project went live over the Labor Day weekend, and OpenAirBoston contractors have spent recent weeks testing 42 routers, called "radios," that have been installed on Grove Hall street lights and telephone poles to beam radio signals between the people using wireless devices in the neighborhood and a downtown switching station connected to the Internet.

Yesterday, 10 eighth-graders from Lila G. Frederick Pilot Middle School in Dorchester brought laptops to the corner of Blue Hill Avenue and Intervale Street for a field test of the wireless signals, part of a school project that is helping city officials plan the WiFi project. The students have been gauging where the wireless signals are strongest and weakest in the area bounded by Dudley Square, Franklin Park, Columbus Avenue, and Blue Hill Avenue.

While the signal was robust near the traffic light pole at the students' intersection, it has been spotty elsewhere in the pilot area, where trees and buildings have interfered with the signal between the routers and wireless users. City and OpenAirBoston officials have concluded they will need to add another 10 to 13 routers to overcome technology limitations in the pilot district. "As other cities have found, we need more equipment than we'd initially expected to get the coverage," Reeve, the OpenAirBoston chief, said.

OpenAirBoston has enlisted and trained 15 "first families" in Grove Hall to help test the network and provide feedback to city officials. The low-income neighborhood has about 8,000 households, with a quarter estimated to have computers. It was chosen for the pilot as part of an effort to bridge the "digital divide" with affluent districts where computers and high-speed Internet access are more common.

"These kids will have access to a new world of information they wouldn't have in the past," Menino said at the field test yesterday.

Boston city officials, meanwhile, want to use the pilot WiFi district to run experiments with the wireless transmission of data from municipal employees, such as parking enforcement workers or health inspectors, using tablet personal computers. "We're trying to find some city services we can test," said Bill Oates, the city's chief information officer.

Oates and Reeve said the city is committed to moving forward with its WiFi deployment. . "While we may be going slowly, hopefully we'll do it right," Reeve said. "We're looking at a slower road to a longer-term program."