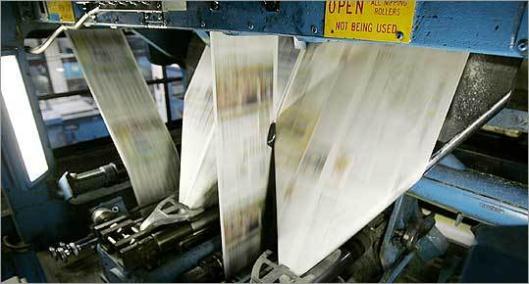 Newspaper circulation continues to decline in Massachusetts and across the country, according to a report issued yesterday. But for the first time, the data also included figures for newspaper websites to measure the growth of online readership.

Nationwide, average daily paid newspaper circulation declined 2.6 percent in the six months that ended Sept. 30, compared with the previous year, according to the Audit Bureau of Circulations, an independent organization that monitors the industry. Sunday cir culation dropped 3.5 percent nationwide during the same period.

"It's scary because it's a fairly rapid descent, in an area where declining circulation has now come to be something we live with," said Stephen Burgard, director of Northeastern University's School of Journalism. Boston has suffered more than other markets, he said, because of its large number of Web-savvy readers with high-speed Internet access.

Circulation also dropped at the state's other daily newspapers. Daily paid circulation at the Worcester Telegram & Gazette fell 5.3 percent. The paper, like the Globe, is owned by The New York Times Co. The Patriot Ledger, which recently trimmed 130 full- and part-time employees from its staff, dropped 2.2 percent.

In an effort to demonstrate to advertisers that overall readership is growing even as print circulation drops, 206 newspapers began combining circulation, readership, and online measurements to provide a combined picture of how many people are reading their content.

The Globe, which this week is launching the redesign of its website, Boston.com, reported 2.3 million combined print and online readers in the Boston market, 4.2 million unique visitors to the website, and 61 million page views.

"I love that they're talking about audience - that's truly the metric" of the newspaper's reach, Susan Hunt Stevens, senior vice president of circulation and marketing at the Globe, said of the Audit Bureau of Circulations report. "What I think these numbers demonstrate is our clear lead."

The new data were gathered through a joint initiative by the Audit Bureau of Circulations, Scarborough Research, and the Newspaper Association of America. The online data were provided by Web measurement companies such as Nielsen//NetRatings, comScore Inc., and Omniture.

While newspapers' online presence has expanded their reach, online revenue still constitutes a small fraction of overall income, as the newspaper industry struggles to adapt to an online environment with many more competitors and new revenue models.

"You've actually got more eyeballs looking at journalism than ever before," Burgard said. "Because it's not just the primary circulation area - you're getting readers from far-flung places and things in Boston in science, health, education, and sports are an area of interest to people around the country and around the world."