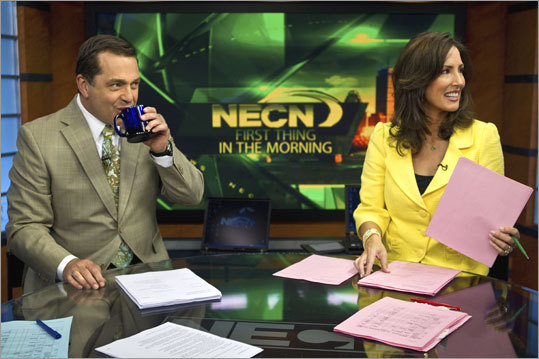 Before the recent revamp of their morning team, NECN had been the first to jump into the 4:30 a.m fray. Mike Nikitas and Karen Swensen (pictured) were the original anchors of the 4:30 a.m. newscast. The new NECN early, early show will be anchored by Steve Aveson and Bridget Blythe.

Here, former morning show anchor Mike Nikitas and Karen Swensen - who will stay on with Aveson until she is replaced by Blythe - sat on their marks in the studio and prepared for a 4:30 a.m. "First Thing in the Morning" newscast at NECN's studios in Newton in May of last year. Nikitas has since moved on to anchor during early evenings and Nightside