It's been a long season so far for the Red Sox and merchants around Fenway. Whether that's good or bad depends on who you ask. Not that anyone's crowing. 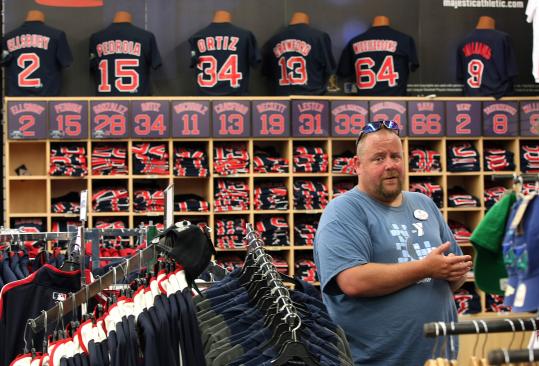 Beset by injuries and bogged down by mediocre pitching, the 2012 Red Sox limped into the All-Star break with a .500 record, tied for last place in the American League East.

But as the home team struggled, restaurants near Fenway Park noticed a strange and unexpected phenomenon: Business was up.

At the Eastern Standard bar and restaurant in Kenmore Square, manager Molly Hopper said that fans who once rushed out the door to get to the game have been lingering longer and returning sooner.

“They’re definitely not running to the game to catch the first pitch as quickly as they would” in the past, Hopper said. “Instead of getting a quick burger or a sandwich or an oyster or two, guests are choosing to extend their dining stay and allow for dessert, which we obviously greatly enjoy.”

The Red Sox’s so-so performance has become a touchy subject at Eastern Standard. Season ticket holders who regularly visit the restaurant before games now prefer to chat about their summer vacations or debate which bottle of wine to get rather than talk about the team, Hopper said. The staff has learned to avoid bringing the subject up.

The story is much the same at the Citizen Public House & Oyster Bar on Boylston Street.

“If anything it’s improved our business,” said bar manager Joy Richard of the team’s underwhelming performance. “People are staying longer before the game and leaving the game earlier to come to us.”

More predictably, the Sox’s performance is undermining sales of team merchandise, especially the jerseys of popular players. Major League Baseball’s licensee for such merchandise, Majestic Athletic, said that while sales of jerseys for all of baseball combined are up nearly 40 percent so far this seasons, sales of Red Sox jerseys are declining at a single-digit pace.

At the Red Sox’s official store on Yawkey Way, manager Scott Saklad said business would be off this year but for sales of shirts and other gear commemorating the 100th anniversary of Fenway Park.

“We had an ace up our sleeves this year, thank God,” Saklad said. “If we didn’t have that, sales would definitely be showing negative.”

Saklad said another explanation for soft sales is because the Red Sox made few major acquisitions of new players who generate excitement among fans. The Red Sox have few such players this season, and the shine of last years’ blockbuster acquisitions — Adrian Gonzalez and Carl Crawford — has faded.

At the Yawkey Way store last week, New Hampshire resident Chris Webster was browsing through baseball jerseys, but said he wasn’t planning on buying one because he already had a few at home. A lifelong fan, Webster said he wasn’t too put off by the team’s performance so far this year.

“I’ve been with the team forever,” Webster said. “There’s going to be down years, and you just gotta roll through. We had 10 pretty good years.”

The Red Sox remain a major draw among fans looking to buy baseball jerseys and other gear — among the top five teams of merchandise sold by Majestic Athletic.

“Sales are certainly down, and some of it is performance as it relates to the standings,” said Majestic president Jim Pisani, who declined to provide figures. “But they have a very strong, loyal fan base that seems to be supporting them through thick and thin.”

But through this period TV ratings for Red Sox games have remained surprisingly strong, with broadcaster NESN pulling in a 7.5 household rating and an average of 224,000 viewers per game. That’s not far off the team’s 7.7 rating at the midpoint last season.

Inside the ballpark, meanwhile, fans are spending more on food and beverages, but Red Sox chief operating officer Sam Kennedy acknowledged that jersey sales and other merchandise were “probably flat.”

“It’s pretty humbling given that we’ve not gotten off to the start in the first half we were hoping for,” Kennedy said. “As the team gets healthy, things will hopefully pick up, but the fan support and commitment has been consistent, and we’re grateful.”

Dan Adams can be reached at dadams@globe.com. Find him on Twitter at @DanielAdams86.