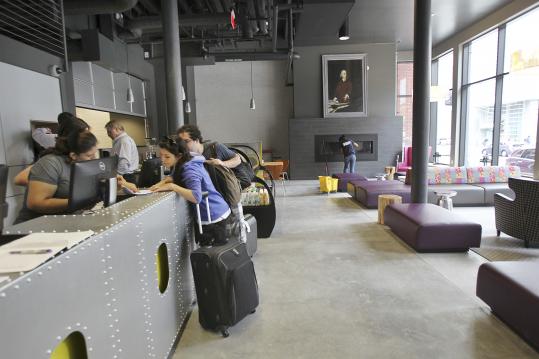 Mary Nuebel and Louise Eidsmoe couldn’t have timed their trip to Boston any better.

Had they arrived a day earlier, the friends from St. Paul would have been housed at a cramped former boarding house in the Back Bay with narrow hallways, stained carpet, and communal bathrooms. Instead, they oohed and aahed and oh-my-goshed over a gleaming kitchen and bunk beds stacked with crisp white linens at a new 480-bed hostel, complete with elevators, central air, private bathrooms, and other amenities.

“It looks like no other hostel I’ve ever stayed in,” said Nuebel, 64, recalling her early days staying in European hostels in the 1960s. “Sometimes it’s like sleeping in a pasture.”

Nuebel and Eidsmoe on Tuesday became two of the first guests to check in to Hostelling International’s new $46 million facility on Stuart Street. The hostel, which celebrates its grand opening on Friday, aims to satisfy the growing demand for affordable accommodations in Boston.

Of the slightly more than 18,000 hotel rooms in Boston (not counting a handful of smaller hostels), less than 1 percent are considered budget accommodations, ranging from $69 to $140 a night, according to the hotel consultancy PKF Consulting USA. By contrast, more than 85 percent of Boston’s hotel rooms are in the upscale or luxury categories, with rates that can climb above $500 a night.

The new hostel, which has more than twice the number of beds as the old facility, charges $29 to $59 a night for dorm rooms that sleep four to eight people. The hostel also has 20 private rooms that go for $89 to $169 a night.

The old facility was bursting at the seams during the summer, when the hostel would rent a Boston University dorm to house as many as 300 additional guests at a time.International travelers between the ages of 18 and 30 make up the majority of the Boston hostel’s guests, a demographic expected to increase significantly over the next several years, according to the United Nations World Tourism Organization.

“What I see this doing is opening up the Boston market to a more price-sensitive traveler,” said Andrea Foster, vice president at PKF Consulting, noting that most of the city’s hotel development over the past decade has been high-end.

Hostels started in Germany about 100 years ago as an affordable way for young city dwellers to visit the country, spreading to the United States in the 1930s. Hostelling International, a nonprofit group founded in 1934 in Northfield, has 4,000 hostels in 80 countries, including 60 facilities in the United States. There are seven Hostelling International properties in Massachusetts, five on the Cape and Islands, with the remaining one in Littleton.

Young people now are more particular about their accommodations, noted Deborah Ruhe, executive director of Hosteling International’s New England affiliate, requesting separate accommodations and secure lockers where they can charge phones and laptops — both of which are available at the new Boston hostel.

The space has a modern feel, with cement floors, exposed pipes, and original brick walls of the 19th-century building in which the hostel operates. The public can mingle with guests in the lobby, sitting in modern wingback chairs in front of a gas fireplace and ordering espresso and sandwiches from the coffee bar. On the second floor, there’s a pool table, computer room, TV lounge, and a dining room with a wall of windows looking out onto Stuart Street.

TVs outside each elevator broadcast local news and weather forecasts; the washing machines are hooked up to a website that shows visitors when their laundry is finished.

The builders worked to create an environmentally efficient property, using reclaimed beams from the building to make tables and stairs and installing energy-efficient elevators and plenty of windows to let in more natural light. Tables are made from recycled aluminum, chairs from plastic Coke bottles.

If all goes as planned, the Boston property will be Hostelling International’s first LEED-certified facility (Leadership in Energy and Environmental Design), designated by the US Green Building Council, a trade group in Washington.

Guests Nuebel and Eidsmoe, who are retired, planned to spend six nights in Boston — going out to eat, visiting museums, walking through Boston Common — before heading to Maine to hike in Acadia National Park. They couldn’t have afforded to stay nearly a week at a hotel charging a few hundred dollars a night, they said, but $40 a night was no problem.