As lacrosse takes hold, retailers gain customers — on and off the field 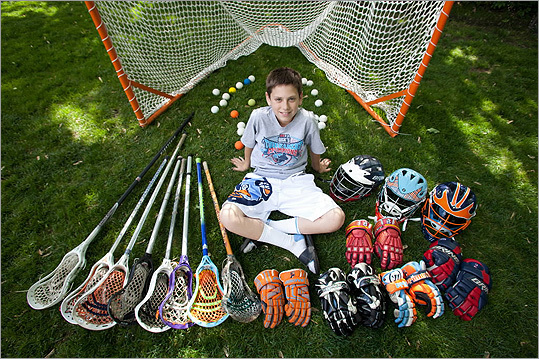 Brookline third-grader Beau Keough considers himself more than a dedicated lacrosse player. At 9 years old, he is already a lax bro, one of a growing group of young lacrosse enthusiasts who have cultivated a laid-back lifestyle to pair with the high-energy field sport.

“You have to have a lot of the stuff, wear it a lot of the time,’’ said Keough, who plays on the town team. “Lacrosse is cool.’’

Older lax bros — short for “lacrosse brothers” — tend to offer similarly vague definitions of the phenomenon, but it is easy to spot them. Lax bros display a certain understated confidence that critics call arrogance. They wear their hair long, a look known as “lettuce.” They dress in colorful board shorts, flat-brim hats, and bright half-calf socks. They carry lacrosse sticks, or “spoons,” on and off the field.

Everything good is “chill,” especially chillin’, a favored activity that often includes listening to the music of O.A.R., Dispatch, and Dave Matthews.

The attitude and style are proliferating on school campuses from junior high schools to universities as the game has hooked tens of thousands of young athletes nationwide in recent years.

First played by Native Americans hundreds of years ago, lacrosse is the fastest growing team sport in the United States, according to the Sporting Goods Manufacturers Association, based in Maryland. The game is luring players from the rosters of Little League and other youth baseball teams and attracting businesses eager to profit from specialized lacrosse gear, camps, clubs, and pricey apparel.

Supporters of the subculture say it provides young athletes with a sense of identity and is helping to popularize a sport that is uniquely American.

“You check the way the kids carry themselves,’’ said Tommy Lee, a father of two lax bros who coaches a Brookline Youth Lacrosse team of fifth- and sixth-grade boys. “It has become a really cool thing. It’s like walking around with a little swagger.”

Lee said his sons have benefited from playing — and living — the sport. His oldest son recently was recruited and is committed to play lacrosse at Assumption College in Worcester.

But others worry the identity exudes a preppie/frat-boy image that glorifies elitism and wealth, and values flash over hard work. Some youth lacrosse leagues discourage any association between players and the lax bro lifestyle.

“We are anti-lax bro,’’ said Dan Chouinard, program director for the Boston club team Laxachusetts. “We push character and academics.”

To reinforce that philosophy, Laxachusetts prohibits its elementary school and high school athletes from wearing flat-brim hats and baggy shorts to club functions.

For decades, lacrosse was largely played among East Coast preparatory schools and in affluent communities. The reasons for such exclusivity are unclear, but some trace it to the 1800s, when Queen Victoria attended an exhibition game in England and pronounced it “very pretty to watch,’’ according to the Federation of International Lacrosse.

Enthusiasts of the sport are working to make it more accessible, and their efforts appear to be paying off. Last year, 361,275 children under the age of 15 played lacrosse nationwide, a nearly 64 percent jump compared with 2006, according to US Lacrosse, a nonprofit based in Baltimore that regulates the sport. In Massachusetts, the number of high schools with boys and girls lacrosse teams expanded to 384 this year, compared with 268 in 2006, adding thousands of more players, according to the Massachusetts Interscholastic Athletic Association, based in Franklin. The Boston nonprofit MetroLacrosse coordinates teams in Brockton, Dorchester, Roxbury, East Boston, and Chelsea.

But Thomas Spangenberg, president of the nonprofit Mass Bay Youth Lacrosse, said lax bro culture could undermine attempts to publicize lacrosse as a sport that is open to anyone. The popularity of his league has exploded in recent years, Spangenberg said, and now counts more than 15,000 players in about 100 communities.

“We are trying to keep the message of inclusion, everybody belongs, everybody plays,’’ he said.

Andrea Keough, mother of Brookline player Beau, is all for inclusion. Three years ago, she signed up Beau and her other two boys — Zander, 12, and Cameron, 11 — to play lacrosse after becoming fed up with sitting through slow-paced baseball games. To her relief, they were immediately hooked, contributing to the 10 to 20 percent annual growth rate of the nonprofit Brookline Youth Lacrosse league.

Keough is happy to spend money on gloves, customized helmets, and off-field gear — including piles of hats, socks, and lacrosse-style shorts. “Kids want to have an identity,’’ she said. “I love the fact they are passionate about the game.”

As lacrosse has gained more followers, the ways to spend money on it also have increased. Entry-level equipment packages for an elementary school boy sell for about $160 and usually include a stick, helmet, shoulder and arm pads, and gloves. Experienced players can opt for color-customized, gladiator-style helmets priced at more than $200, and padded gloves that cost nearly $200. Lacrosse sticks can be bought in parts, with a high-end pole selling for nearly $300 and the pocket, or head, costing another $100. Boys’ equipment costs more than equipment for girls becasue the boys’ rules allow for more contact among players.

Many lacrosse players are “gear heads” — they collect a variety of sticks, using some for games and others for hanging out with their lax bro buddies.

Kristopher Campbell, 13, of Longmeadow, said he owns 10 sticks and is always looking for something newer and better. Campbell said he finances his equipment by stringing sticks for friends and teammates. He has been playing lacrosse since he was 3 years old and is currently on two teams. Being a lax bro, he said, is all about the look and the love of the game.

“It is someone who likes to wear all the lacrosse stuff wherever they are and talks about lacrosse all the time,’’ Campbell said.

Indeed, a growing number of lacrosse-lifestyle items are hitting the market. Local stores like Commonwealth Lacrosse, with seven locations in Massachusetts, sell an array of socks, hats, and T-shirts, including those that read, “Lax Bro” and “Welcome to Laxachusetts.” The shops feature products by a New York company called Flow Society, which claims to “represent the flow of the game and the flow of energy from a growing culture.” Its website includes a video of young lacrosse players running through a chateau-like, chandelier-studded space.

At Commonwealth Lacrosse in Needham, assistant manager Chris MacKay said he is amazed by young players’ mushrooming enthusiasm for the game, gear, and clothing. MacKay, 21, who is taking a break from sports and studies at Hobart College in New York, said he also is a member of the bro tribe, although he cannot pinpoint exactly what that means.

It is “someone who plays a lot of lacrosse, enjoys hanging out, being sort of lackadaisical,’’ MacKay said. “Everyone has their own opinion of a lax bro. That is mine.”