Even with conversion costs, demand is up for cheaper alternative to heating oil 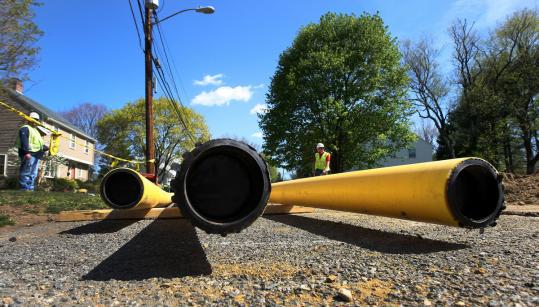 NEEDHAM - The winter that nearly wasn’t is only just over but Ken Loderick is already planning for the return of cold weather: the Needham resident is about to replace his 20-year-old oil-based heating system with a new one fired by natural gas.

So are many of his neighbors. NStar is running a new gas line to his neighborhood after nearly two-thirds of the households told the utility they would consider converting.

With prices for natural gas plummeting, and new burners and boilers significantly more efficient, Loderick expects to recoup the $10,000 or so cost to convert his system fairly quickly; in winters past Loderick kept his house cool, yet still paid a stiff heating bill.

“Most of the time the house is only about 64 degrees, except for a couple hours in the evening,’’ Loderick said. “That’s $4,000 a year to keep our area fairly cool.’’

Long the one region in the country where oil remains a popular fuel for heating, New England appears to be on a natural gas binge. At NStar, conversions have tripled over the past three years; National Grid said conversions are up 34 percent in the same period.

Natural gas is enjoying a surge in popularity for several reasons. Production in North America has increased substantially over the past decade, and energy officials predict the nation has ample supplies for decades to come. That has resulted in prices falling to the lowest point in a decade. Gas prices have also been more stable, less subject to the wild swings that have roiled the international oil markets the past several years.

Though this past winter was mild, oil customers still paid much more to heat their homes - $2,238 on average - than did natural gas consumers, who shelled out $868 on average, according to the US Energy Information Administration.

The cost of converting can vary widely, from a few thousand dollars to update a younger system, to more than $10,000 for a complete kit of burner, boiler, hot water tank, and chimney liner.

Utilities have incentives to ease the cost. GasNetworks, a collective of New England natural gas companies, offers rebates from $400 to $1,500 for high-efficiency boilers, furnaces, and other equipment. Zero-interest loans are also available.

Another compelling reason: new gas burners are significantly more fuel-efficient than older heaters, so consumers save twice - once on the low price, and a second time on less consumption.

The strain of running its 100-year-old oil-heat system finally persuaded the Panagia Greek Orthodox Church in Cohasset to convert to natural gas. The congregation held a fund-raiser and sold its antique steam radiators to come up with the $40,000 to pay Wood to convert the system. Wood estimates the church’s heating bill, typically $10,000 to $12,000, will be cut in half.

“We have a building project going on and we’re having a fund-raiser to build a community center right next to the church, so some of the savings can go into that,’’ said Ed Lofgren, head of the Panagia parish council’s buildings and grounds committee.

But the popularity of natural gas to heat homes and generate electricity has made New England increasingly dependent on it as its main fuel source. That has some concerned, particularly in the electric-power sector, that the region could be vulnerable to intermittent problems if demand sudden outstrips the system’s current delivery capacity. With half of New England’s electricity coming from gas-fired plants, the operator of the regional power grid has said it wants to make the region less reliant on natural gas for electricity.

Meanwhile, there are still many households in Massachusetts that cannot get natural gas because their neighborhoods do not have main supply pipes. Typically utilities will install a gas main to a neighborhood if the residents are willing to pay for it. Because of the growing popularity, utilities have taken to installing gas lines whenever a municipality is digging up its streets for other work.

In the Needham neighborhood, NStar is footing the installation bill as many residents have indicated they will sign up for service.

Loderick, the Needham homeowner preparing to convert to natural gas, estimated his heating bills will be less than half the $4,000 or so he spent for oil.

“Growing up, I had gas for cooking, hot water, and clothes dryers and it was always such an economical, wonderful fuel that I was sorry that it wasn’t in the street when we moved here 20 years ago,’’ Loderick said. “I didn’t have any concerns at all about bringing it in.’’