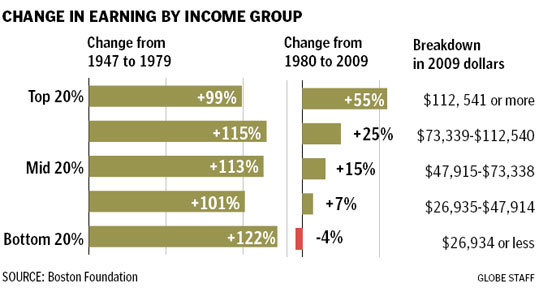 The disparity between Boston’s top earners and its poorest workers has widened and will continue to grow unless the region’s educational system is improved to increase opportunities for all workers, and excessive costs, especially for health care, are reined in, according to a biennial report released Wednesday by the nonprofit Boston Foundation.

“Now is the time to get a grip on the growing divide,’’ said Charlotte B. Kahn, director of the Boston Indicators Project, a collaboration between the foundation, city officials, and institutions to track the economic health of Greater Boston.

Income inequality was identified as perhaps the greatest threat to the region’s long-term prosperity.

As more wealth is concentrated in the top income groups, it leaves the vast majority of workers more vulnerable to economic downturns and rising costs of living that can quickly wipe out finances, the report said.

Part of the problem, the report says, is that while Boston has a thriving innovation economy with well-paying jobs in finance, high technology, and biotechnology, finding a job in those sectors requires training and skills that many residents don’t have.

As the state has rebounded from the recession and the unemployment rate has dropped nearly a percentage point over the past year, to 6.9 percent in January, the benefits of the recovery have been spread unevenly, leaving many behind.

The report underscores the need for a “renewed commitment’’ to helping all Massachusetts residents get a good education, said Michael Goodman, a professor of public policy at the University of Massachusetts Dartmouth who has studied income inequality.

“One of the things that really separates the haves from the have-nots in the so-call City of Ideas is educational attainment,’’ he said. “We need to empower people to create more of their own opportunities.’’

Other threats to economic well-being include the high housing and health insurance costs that have squeezed Massachusetts residents for the past several years. By 2020, health care costs are projected to nearly double to about $18,000 per person from 2010. Left unchecked, rising health care costs could siphon resources away from other needs, particularly education, the report said.

Strategies to address these threats should engage more young workers and civic leaders to identify and address problem areas in communities; help companies - especially small businesses - find the capital they need to expand and create jobs; and broaden the state’s economy to encourage innovators working on global problems like affordable housing and health care, safe communities, and sustainable food production.

“I think we’ve blown past a lot of opportunities for that kind of innovation,’’ Kahn said.

Massachusetts’ innovation economy can and already does “spread around the state and across different occupations’’ but needs to be broadened to benefit more people, said Greg Bialecki, the state’s housing and economic development secretary.

Among the challenges: creating well-paying jobs in cities outside of Greater Boston and keeping manufacturing jobs in the state.

“If we just invent new products but don’t make them here, that’s going to lead to further income inequality,’’ Bialecki said. “We [also] need to think about the kinds of programs that will promote entrepreneurship and small-business growth in all kinds of communities.’’