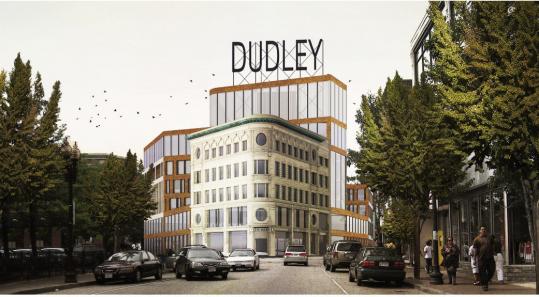 The historic Ferdinand building will anchor a $115 million office and retail complex in Dudley Square. The multitiered facility will be the new home of the Boston School Department and will include space for art exhibits and special events. Officials hope it will open in fall 2014. (Renderings/Sasaki Associates and Mecanoo Architecten)
By Casey Ross Globe Staff / March 3, 2012
Text size – +

Forget what you know about Dudley Square.

That’s the message Boston officials are spreading today as the city begins construction of a $115 million office and retail complex that aims to redefine Roxbury’s long-struggling commercial core.

The project includes a striking new headquarters for the Boston School Department as well as public parks and community spaces for art exhibits and other events. Unlike at the city’s other municipal buildings, the plan includes several retail spaces that officials hope to fill with a mix of restaurants and shops.

“You’re going to see a rejuvenation of this whole area,’’ said Mayor Thomas M. Menino. “It’s going to help people in the neighborhood to stay put because there will be more jobs and economic opportunity.’’

The project, which is over a decade in the making, will preserve the prominent Baroque Revival facade of the Ferdinand building at the heart of the square, while also expanding the structure to create a more modern six-story office complex. The building will have green rooftops, at least one of which will be publicly accessible, and officials are weighing options for a special lighting effect on its upper floors.

The Boston Redevelopment Authority conducted an unusually broad search for architects, eventually settling on an international team - Sasaki Associates Inc. of Watertown and Mecanoo Architecten, based in the Netherlands.

The firms have designed a multitiered building that offers a different aesthetic on each of its sides. The front entrance opens to a sweeping public atrium that could host meetings and events, while the rear of the structure has additional retail shops and space for a public park next to the Dudley MBTA station.

“It’s almost like a little city,’’ said Francine Houben, the founding partner of Mecanoo Architecten. “We are trying to bring more coherence and atmosphere’’ to the property, she said. The area will also get wider sidewalks for outdoor cafes, along with improved landscaping.

Kairos Shen, chief planner for the BRA, emphasized that the agency is seeking to attract distinctive shops and restaurants to the square instead of the typical mix of chain coffee shops, restaurants, and pharmacies. “We don’t want the fat cats and cookie-cutter retail,’’ Shen said. “We want something that complements the existing character of the neighborhood.’’

The effort to revitalize Dudley Square has unfolded in fits and starts over the years. Menino helped craft an initial proposal to move state offices to the neighborhood, but that plan languished and was ultimately killed by former Governor Mitt Romney in 2004.

A year ago, Menino pitched a new plan to move the School Department to the property, kicking off a yearlong design and planning process with architects, neighbors, and business leaders. The city expanded the project by eminent domain takings of adjacent buildings on Washington Street, creating more space for the planned restaurants and stores.

When it opens - now scheduled for fall 2014 - the property will become home to more than 500 city employees, adding to already heavy daily activity at the Dudley T station, which handles about 30,000 passengers a day.

Officials hope the effort will serve as a catalyst for other real estate projects in the area. The BRA is planning to award bids soon for the development of two large city-owned parcels along Melnea Cass Boulevard, where developers are proposing a mix of residences, a hotel, and stores. Other developments are planned at the Blair’s lot along Washington Street and at parcel 3, a large plot off Tremont Street.

The city has already built a new police station in Dudley Square and wants to renovate the public library branch there. Menino said the aim of the work is to once again make the area a magnet for shopping and commercial uses, but also to make it more livable for current residents and newcomers.

“This is such an opportunity.’’ Menino said. “We want people to stay there and live there and raise their families there. That’s what this is all about.’’