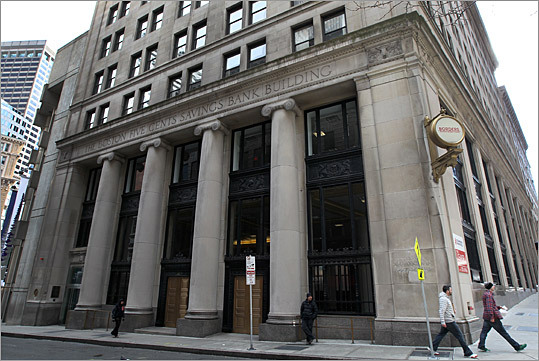 Walgreens is taking over part of the building that once housed the Boston Five Cents Savings Bank; this is the side view on School Street. (Barry Chin/Globe Staff)
By Jenn Abelson Globe Staff / February 28, 2012
Text size – +

It’s certainly not a typical drugstore. But these are among the amenities that Walgreens will offer in the former Borders space when it debuts a 24,000-square-foot store this fall in Downtown Crossing.

The Illinois drugstore chain will model the Boston location after two it recently opened in New York City and Chicago.

“This is an opportunity to do something unique and different in such a high-profile location,’’ said Michael Polzin, a Walgreen Co. spokesman. “There are a lot of people walking by on the Freedom Trail, and it will be a great destination for people who live and work in the area and for out-of-town visitors.’’

Walgreens was one of dozens of retailers that had expressed interest in the property at School and Washington streets, across from the Old South Meeting House.

The site, which is just steps away from rival CVS, was vacated by Borders last year after the bookstore company filed for bankruptcy protection and liquidated the chain. Borders had occupied more than 41,000 square feet there since 1996; the grand building was originally home to the Boston Five Cents Savings Bank. Walgreens, which signed a 30-year lease, is taking over the first floor, the basement, and the mezzanine and is considering using space on the second floor.

A fitness club is one of a number of businesses eyeing about 16,500 square feet on that upper level, said several people briefed on the talks.

“We had hoped to draw a flagship retailer like Walgreens who would invest in this site. It’s unlike any pharmacy you’ve ever seen,’’ said Michael Murphy, executive director of Clarendon Group USA Inc., which owns the building. “Walgreens will bring an array of products that will address a lot of needs in the Downtown Crossing area.’’

A Walgreens flagship store is welcome news for the retail district, which has struggled for years since the redevelopment of the former Filene’s building, at One Franklin Street, stalled. Walgreens began talks for the Borders site months before Millennium Partners disclosed plans recently to take over the Filene’s project and move ahead on construction by next year. Downtown Crossing has suffered from persistent vacancies and the giant crater left by Filene’s in the middle of the neighborhood. Clarendon Group USA, which has 60 percent of its office space occupied at the School Street property, also has had a vacant storefront on nearby Washington Street.

City officials and business owners are hopeful that the arrival of Walgreens - and progress at the Filene’s site - will bring meaningful change to the shopping district.

“This store is a new, unique concept, and this signature Downtown Crossing site will be a great fit for a flagship Boston store,’’ said Mayor Thomas M. Menino. “It’s exciting to see another piece of the puzzle coming together as we build on the promise of Downtown Crossing.’’

Marshal Cohen, chief retail analyst with NPD Group, a market research firm in New York, said Downtown Crossing will benefit from the Walgreens because it will have long hours and offer a wide range of products. The first store of this type in New York, which operates under the Duane Reade brand at 40 Wall St., is open 24 hours, boasts a retro-style mahogany-polished shoe-shine area, and has a 20-foot official New York Stock Exchange in-store ticker.

“Think of it as a drugstore on steroids,’’ said Cohen, who has been to the Wall Street store. “It is more of a mini merchant, with everything from drugs to duds, from baby products to beach chairs.’’

Walgreens, the nation’s largest drugstore chain, has not decided on hours for the Downtown Crossing location, but the Chicago site operates from 6:30 a.m. to midnight during the week, Polzin said.

As in its other locations, Walgreens is planning a sleek open space with a European boutique feel, while maintaining the distinctive architectural details of the historic building, including decorative plaster ceilings, travertine walls, intricate brass radiator covers, trim details and doors, and columns.

“There are half a dozen if not more uses under one roof that meet the needs of every customer,’’ said Jeremy Grossman, an executive with CBRE/Grossman Retail Advisors, which exclusively represented the owners in the retail leasing of the property. “It’s just the start of possibilities and retail change in Downtown Crossing.’’

A look at other upscale Walgreens locations