Steady hand on holdings of ex-governor 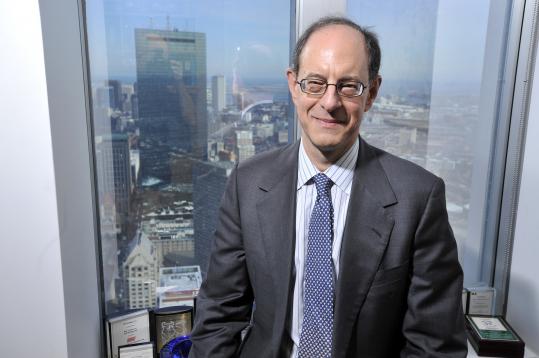 R. Bradford Malt is best known in legal circles as the chairman of Boston’s largest law firm, Ropes & Gray LLP. But last week, Malt burst into the national spotlight as the trustee responsible for overseeing Mitt Romney’s vast fortune and making controversial decisions to invest some of it in a Swiss bank account and funds based in exotic locales like the Cayman Islands.

Since then, the corporate attorney has spent marathon days explaining the intricacies of Romney’s holdings to reporters across the country, and seen his defense of the Swiss account turned into a Democratic attack ad on YouTube.

“The first time you see yourself in an attack ad is an awkward moment,’’ Malt said in an interview at his office on the 47th floor of the Prudential building. “I’m not used to it, but I think it goes with the territory.’’

Malt, a lanky 57-year-old with a penchant for pulling office pranks, has been at Romney’s side at pivotal moments in his career for the past two decades - whether it was saving Romney’s old consulting firm from bankruptcy, helping him stay on the state election ballot in 2002, or defending his investments in his current run for president. Malt has made investment decisions for Romney since 2003, when Romney became governor and put his money into a blind trust to avoid conflicts of interest.

It’s a job that requires Malt to look out for Romney’s political as well as financial well-being.

In 2007, as Romney prepared his first run for president, Malt sold stock in dozens of potentially controversial companies, including casino operators, tobacco growers, and firms with ties to Iran. Last year, after Romney pushed for tougher trade sanctions against China, Malt dumped a number of Chinese holdings. He recently shed a money market mutual fund that had invested in government-backed mortgage companies, Fannie Mae and Freddie Mac, which are blamed for exacerbating the housing bust.

In early 2010, as Romney advanced toward a second presidential campaign, Malt decided to close the $3 million UBS account he set up in Switzerland seven years earlier, realizing it could become a political issue. In 2009, the US government sued UBS to obtain the names of thousands of Americans who secretly held billions of dollars in Swiss accounts.

Malt said he opened the Swiss account not to hide assets, but to diversify Romney’s investments into foreign currencies. If the value of the dollar declined, for example, a rise in the Swiss franc might offset it. The account, Malt stressed, was listed on Romney’s 2010 tax return and Romney paid taxes on the interest, just as he pays taxes on all the earnings from other foreign investments.

“It’s actually kind of crazy,’’ Malt said of the controversy. “This is a fully legitimate, fully reported account that pays every penny of taxes.’’

Malt grew up in Wellesley, the son of a noted surgeon, Ronald A. Malt, who oversaw the first reattachment of a human limb 50 years ago. After graduating from Harvard Law School in 1979, he joined Ropes & Gray and established himself as one of the top lawyers in the country for handling complex leveraged buyouts and private equity deals.

The windowsills in his corner office are lined with dozens of mementos marking past deals, including some from Romney’s old firm, Bain Capital. “He’s one of the finest lawyers in the country,’’ said Geoffrey Rehnert, a former Bain partner and now cochief executive of Audax Group, a Boston private equity firm.

It was Rehnert who introduced Malt to Romney in 1990. At the time, Romney and Rehnert were trying to save Bain & Co. - the Boston consulting company that spun off Bain Capital and where Romney previously worked - from potential bankruptcy. Rehnert reached Malt on a Saturday night at his weekend home in New Hampshire and asked him to come to Bain’s Back Bay offices for meetings on how to rescue the consulting firm.

Malt, who drove to Bain’s offices with a colleague that night, said he quickly became impressed with Romney, as the executive rallied partners to stay with the firm and conducted difficult negotiations with creditors.

“I remember someone who stepped into a situation with incredible complexity and had a real knack for solving intractable problems,’’ Malt said. “That is when I first said to myself, ‘This guy would make a great president of the United States.’ ’’

Malt’s advice also made a strong impression on Romney, who tapped Malt to set up his family trusts in the early 1990s, in addition to working on deals for Bain Capital.

In 1994, Romney told the trade publication The American Lawyer that “Brad could take out your liver, if he needed to save your life, and you’d never even know it.’’

Romney turned to Malt for other help as well. When Democrats challenged his eligibility to run for governor - arguing he lost his Massachusetts residency when he moved to Utah for two years to lead the committee organizing the 2002 Winter Olympics - Malt spent the weekend working at Romney’s home in Belmont, figuring out ways to prove Romney maintained his ties to the Bay State.

Two weeks later, the state Ballot Law Commission unanimously ruled in Romney’s favor. Malt, a registered Republican, still has a Romney campaign sign from the race displayed in his office.

Malt said Romney, whose wealth is estimated as high as $250 million, picked him to oversee his blind trust for two reasons. First, Malt understood the intricacies of private equity investments, a key part of Romney’s holdings. Second, Romney trusted him.

“You probably don’t want to leave a quarter of a billion dollars to just anybody,’’ said Malt, who also serves as a trustee for other affluent investment professionals.

Malt - who with his wife, Sharon, lives in a spacious 19th-century brick townhouse on Beacon Hill- spends more time managing Ropes than working on leveraged buyouts. Since he became chairman eight years ago, the firm has doubled the number of attorneys to 1,000 and opened offices in Tokyo, Hong Kong, London, and Shanghai.

In the office, Malt is known for his pranks. Recently, for example, he secretly changed the bland ring tone on a senior partner’s cellphone to a bolder rock song, “Rockstar’’ by the Canadian group Nickelback, and then proceeded to dial the phone during a large meeting.

Said Julie Jones, a Ropes partner: “He is the original Ashton Kutcher of Ropes & Gray.’’