A jolt for morning news 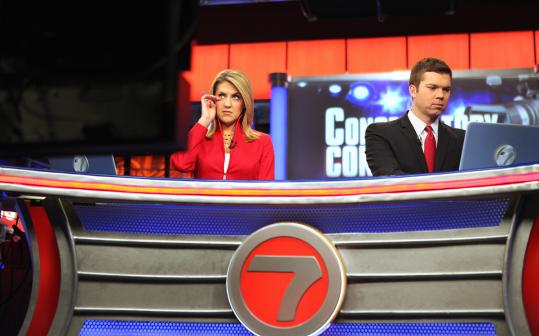 Anne Allred and Adam Williams are morning anchors at WHDH. The station’s early morning viewership is down over the past 12 months. (Wendy Maeda/Globe Staff)
By Johnny Diaz Globe Staff / January 21, 2012
Text size – +

It’s the TV version of a morning fix.

Just this week, WFXT-TV (Channel 25) named weekend anchor Shannon Mulaire as the replacement for longtime morning anchor Kim Carrigan, who was let go at the beginning of January.

In December, WBZ-TV (Channel 4) unveiled a glitzy, $750,000 news set and flashy new on-air graphics to help boost its morning numbers, matching a simultaneous upgrade at the CBS network, its corporate parent. In a bid for better ratings in the competitive battle between national morning shows, the network remodeled its “CBS This Morning’’ news show, installing new hosts Charlie Rose and Gayle King and a harder news style.

In the TV business, change has its risks, sometimes attracting viewers, sometimes sending them away. “Anytime there is change, there is some sampling,’’ said Bill Carroll, a TV station adviser for Katz Television Group in New York City. “When something dramatically changes, we either embrace the change, or we look to see if there are other things more to our liking. That always happens, when, particularly, there are new anchors on the network morning shows.’’

Mornings are the second-highest revenue generators for TV stations after late news. The morning audience attracts viewers ages 25-54, a desirable demographic for advertisers. The increasing emphasis on morning news mirrors the changing habits of workers, many of whom have longer commutes and are waking up earlier. In 2010, four of five Boston TV news stations, including cable channel NECN, added a 4:30 a.m. newscast to their lineup to compete for a growing population of precommute viewers. “In the mornings, that’s the first opportunity to catch up on news, weather, the sports score that took place on the West Coast,’’ said Carroll. “That’s really become that new opportunity.’’

WHDH general manager Chris Wayland acknowledged that he’s always on the hunt for ways to build ratings in the Boston market, the seventh largest in the nation. In September, WHDH expanded its morning news programming to five hours by adding a 9 a.m. newscast, replacing syndicated talk show “LIVE! with Kelly,’’ which now airs on WCVB. Just this month, it added Sarah French as a morning in-studio reporter and former night reporter Tim Caputo to its morning news team. “Any time we do anything to any of our newscasts, it’s to improve our ratings and to put on a better product,’’ Wayland said. “We are always tweaking and evaluating. This market is very competitive.’’

WBZ went beyond the retooled set and graphics to emulate the CBS network morning news show’s new emphasis on hard news. “We know that more and more people are watching morning news. For some, it’s their only TV news of the day,’’ said John Verrilli, WBZ’s news director.

Fine said his competitors have been remaking their morning news for the same reasons he did then. “Because you are spending a lot of time on the air [in the mornings], you are constantly evaluating what works and making adjustments as you go,’’ said Fine. “The other folks think [changes] are necessary, just as I made those changes 2 1/2 a years ago and it worked. You are constantly evolving.’’ 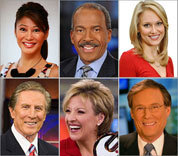