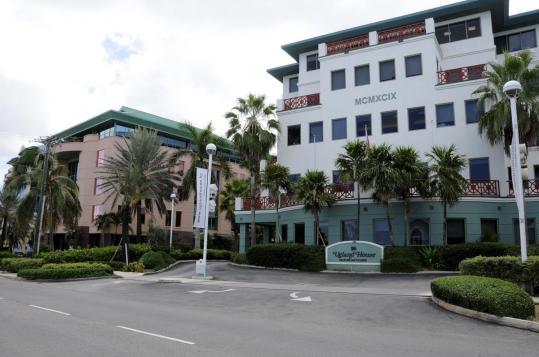 The offshore funds where Mitt Romney has millions of dollars in personal holdings are commonly used by US investment firms to attract foreign money and pension funds, financial industry professionals said yesterday.

The Republican presidential candidate has a portion of his personal wealth invested in funds set up by his former employer, Bain Capital, that are registered in the Cayman Islands. Firms such as Bain frequently set up shop in the Caymans and other tax havens to attract foreign investors who do not want to pay taxes to the United States, or American pension and endowment funds that normally cannot participate in certain types of investments without facing tax penalties, the specialists said.

US investors in such funds, such as Romney, are still required to file tax returns and pay US taxes on the earnings from those investments, according to attorneys who specialize in the area.

“There is a misperception,’’ said Bart Mallon, an attorney with Cole-Frieman & Mallon, a boutique San Francisco law firm that represents hedge funds. “When you say offshore, the American public automatically thinks tax shelter.’’

However, Romney may be avoiding an arcane tax penalty by having some of the investments in his Individual Retirement Account placed in Cayman-registered Bain funds, rather than in similar funds based in the United States, The Wall Street Journal reported yesterday.

Ordinarily, pensions and other tax-favored accounts, such as IRAs, would face a special federal tax, as much as 35 percent, on income received from a US-registered investment that uses borrowed money, or debt, to boost its returns, such as a private equity fund. But offshore funds, such as those in the Caymans, are not subject to the tax.

Romney’s campaign insisted yesterday the former Massachusetts governor and his family paid US taxes on all the income from the Cayman funds.

However, the Romney campaign declined to provide specific information on his Cayman holdings, such as the number of funds registered there or the total value of those holdings. His most recent financial disclosure forms, from August, list only broad ranges for his individual assets and do not make clear whether the holdings are a US or Cayman version of Bain funds with similar names.

Those disclosure forms do make clear Romney has millions invested in Bain Capital funds that are based in the Cayman Islands. For example, Romney reported an interest in BCIP Trust Associates III in his IRA worth between $5 million and $25 million. Romney retired from Bain in 1999.

The Cayman Islands have become a major financial center, with one-third of hedge funds worldwide registering there, because the funds are not subject to US tax rules that discourage certain investors from becoming clients. For example, foreign investors can avoid paying US taxes if their investments here are technically registered in the Caymans.

Massachusetts-based investment firms had some $51 billion in assets registered in the Caymans in 2009, according to the most recent data from the country’s Monetary Authority. Those include mutual fund companies such as Eaton Vance Corp. seeking to attract foreign investors who otherwise would have to pay US taxes on those investments. Eaton Vance declined to comment.

Cayman registration also allows pension funds, university endowments, and others nonprofits to avoid that hefty 35 percent US tax when they invest in hedge funds and private-equity funds that borrow money to increase their investment returns. The Massachusetts state pension system, for instance, has invested millions of dollars in funds established in the Cayman Islands.

For those reasons, financial industry attorneys said it was not unusual for Bain to have some of its funds in the Caribbean country, nor for Romney to have so much money in them. Romney helped found Bain Capital in 1984 and continued to draw compensation from the company long after he retired.

William E. Kelly Jr., a Boston attorney who represents fund managers and institutional investors in funds, noted that private equity managers are typically encouraged to invest a significant share of the personal wealth in their funds, to help market the funds to other investors. And Romney continued investing in the funds until 2009, his campaign said.

“It’s a real benefit to say that a manager has skin in the game,’’ said Kelly, a partner at the law firm Nixon Peabody.

Kelly said he also doubted that Romney received a significant tax benefit by investing in the Bain funds.

A 2008 report by the US Government Accountability Office on the popularity of the Caymans for investors said that registering entities there “can be used to obscure legal ownership of assets and associated income and to exploit gray areas of US tax law to minimize US tax obligations.’’

Meanwhile, the Romney campaign pointed out that his money is managed in a blind trust, meaning he has no control over the investments. In addition, restrictions that private equity funds typically impose mean Romney does not have the option of pulling his money out of the Bain funds whenever he wants.

“That’s the nature of a PE fund,’’ Saul said. “Once you commit capital to it, you’re in the fund until it dissolves, often a decade or two.’’

But some political organizations criticized Romney for having some of his money in the Caymans.

“Taking advantage of those types of tax havens has cost the country over $100 billion in revenues,’’ said Lauren Weiner of Americans United For Change, a labor-backed group that has been critical of Romney.

Weiner said the Romney campaign could dispel suspicions that the candidate is using the funds to avoid taxes by releasing his tax returns, something Romney has said he plans to do only in April.

“We could have a lot of answers if he just released his tax returns,’’ Weiner said.

An earlier version of this article cited a different estimate for the cost of foreign tax havens to US taxpayers.