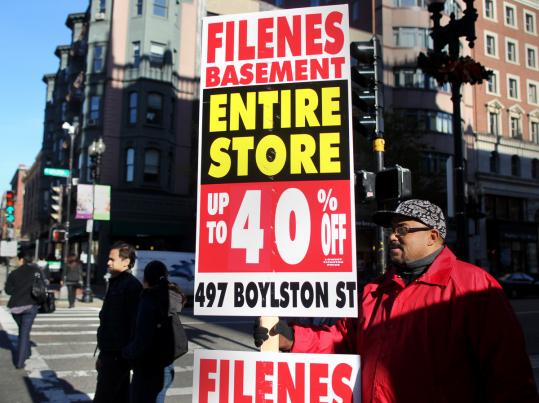 NEWTON - Olga Tines drove in the predawn darkness from Nashua to Newton for final markdown at her beloved Filene’s Basement store.

At 7 a.m., she was the first customer here for Black Friday. As she pushed her shopping cart and grazed the aisles for bargains, she couldn’t help but mourn the coming loss of a Boston retail institution.

“It’s like going to a funeral,’’ said Tines, who has made the early morning road trip an annual tradition with her husband, Andrew Smith, who shopped in the men’s store across the street.

“This store has been a gold mine with wonderful little finds. It’s an end of an era and nothing can replace it,’’ Tines said, her hand over her heart.

Faithful Filene’s Basement shoppers flocked to area stores yesterday for one last Black Friday shopping hurrah at the legendary retailer, which filed for bankruptcy protection earlier this month. The store is holding liquidation sales during the holidays before closing for good in January.

From Newton to the Back Bay, shoppers recounted their favorite bargains like retail victories. The $100 Prada sandals. The half-priced Oscar de la Renta gowns. Laura Biagiotti bags for $69.

“It’s really unfortunate that this store has to go, because people like to value-shop,’’ said Smith.

As he held up his new finds - a Kenneth Cole belt for $8 and a $180 Ralph Lauren suit - he pointed to the Ralph Lauren leather jacket and pink polo shirt he wore that he had bought on prior trips to the Newton store.

Smith said he was unsure where the couple would go for next year’s Black Friday excursion.

The retailer was a shopping icon where fashionistas and everyday workers intersected in the hunt for a good bargain going back to 1909, when Edward A. Filene founded Filene’s Basement in downtown Bostonas a place to sell excess merchandise from his father’s store upstairs.

Over the last century, Filene’s Basement ushered in the concept of bargains after it developed a system of automatic markdowns, with goods discounted on a schedule that consumers could track.

“It’s been part of people’s lives for so long that people feel really attached to it,’’ said Albert Ko, a retail analyst in Newton. “You can’t replace the experience of going into the store and touching and feeling all the goods. It’s always been the bargain stop for consumers in the Boston area.’’

So iconic was the Boston discount retailer that, for its 100th anniversary, the Boston public broadcaster WGBH aired a documentary called “Voices From The Basement,’’ chronicling the company’s history and its connection with customers.

Newton store customers couldn’t escape reminders of the store’s looming final chapter. “Going Out Of Business’’ and “Everything Must Go’’ signs bedecked the store, inside and out. Markdown signs ranging from 20 percent to 40 percent topped almost every rack and display.

Toby Koritsky of Cranston, R.I., woke up at 7 a.m. to beat the early bird Black Friday bargain hunters she encountered in previous years. But she was surprised to see so few customers - about a handful after the store had been open one hour at 8 a.m.

“No one is here. It feels like a place that is closing. It’s really sad,’’ she said, noting that the store was her only shopping stop of the day. She paid $70 for a pair of dress pants and a Calvin Klein pocketbook.

“I really wanted to come here one more time,’’ she said.

At the Back Bay store on Boylston Street, about a mile from the original Filene’s Basement, the scene was livelier. Customers scrounged through tables, racks, and bins as they reminisced about their favorite Filene’s finds.

“We always find things,’’ said Charlotte Hill, a high school librarian from North Dakota who was shopping with her husband, James, and their 28-year-old daughter Sarah, a medical student in Boston. The family has made the store a shopping destination for the day after Thanksgiving for the past 10 years.

Charlotte Hill fondly remembered one year finding a Michael Kors coat for $65, marked down from $400.

“It’s the prices. We always find designer things for the best prices,’’’ declared Hill, as she and her family left the store with a $240 pinstripe suit, two leather wallets, and two pairs of gloves for her iPhones.