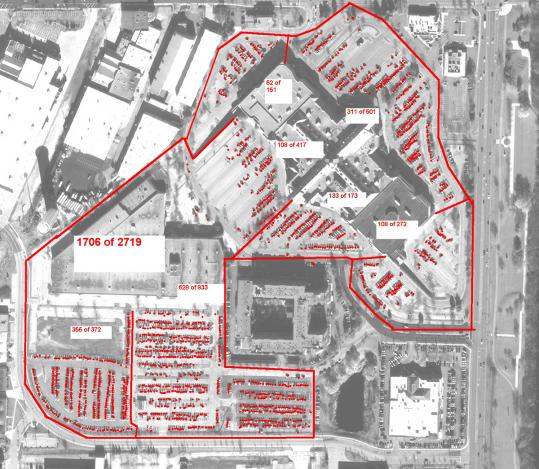 When Macy’s, Best Buy, and other major retailers threw open their doors this morning, Peter Dixon planned to be among the hordes of Black Friday shoppers checking out door-buster specials.

By the end of today he expected to have visited 50 stores - several more than once - between Boston and Manchester, Conn. But Dixon isn’t a crazed bargain hunter. He’s a fund manager for Fidelity Investments.

Dixon is among the many investment professionals who use Black Friday to gauge the mood of American consumers and see firsthand how retailers perform. Meanwhile, unseen satellites over shopping malls capture images of cars in parking lots. Other companies use in-store cameras to count customers.

Now is prime time for such analysis; this weekend launches the holiday shopping season, which accounts for up to 40 percent of annual sales for some chains.

In addition to informing decisions on which retailers are worthy of investment, this intelligence can provide a glimpse of the direction of the economy. Consumer spending accounts for more than two-thirds of US economic activity, so if shoppers are holding back, it’s a sign of trouble.

“I spend a lot of time in stores this week,’’ said Dixon, 35, who manages Fidelity’s Select Retailing Portfolio fund, which has bought stock in TJX Cos., Bed Bath & Beyond Inc., and other retail chains. “Black Friday and this weekend are really an opportunity to better understand the real landscape heading into the holiday season.’’

While Dixon fights the mall crowds, a host of research companies will collect data with high-tech tools to help investment managers get the full picture for Black Friday. ShopperTrak, for instance, has installed cameras in more than 25,000 stores and shopping centers across the country to count the shoppers trekking through.

The Chicago company primarily sells the data to retailers to help them track foot traffic. But it also aggregates the figures by retail category (such as electronics) and sells the information to about 50 investment firms, as well as other clients. The company expects to have preliminary data for Black Friday available tomorrow.

Remote Sensing Metrics LLC, another Chicago company, started using satellite images two years ago to count the cars in parking lots outside stores to estimate traffic for retailers. Computers do most of the counting automatically. Analysts in Sri Lanka spot check the data and use it to estimate changes in traffic and sales.

Counting shoppers is one thing, but figuring out how much they are spending is quite another. Even if traffic is down, revenues could be up if retailers have boosted prices. But analysts have ways to monitor price changes as well.

Investment bank Credit Suisse, for instance, checks the price for a basket of goods every month from major retailers such as Walmart and Target. Many investment firms like Fidelity rely on consultants, called “channel checkers,’’ to call distributors, store managers, and others in the supply chain to track changes in inventory, prices, and sales.

OTR Global LLC., a New York institutional research company that sells reports to a couple of hundred investment managers, says it has in-depth discussions with anywhere from five to 100 people for its reports. Often, the company winds up confirming what analysts and executives already believed.

But OTR chief executive Stanton Green said the company frequently gains fresh insights. For instance, the company discovered in 2007 that inventory for Heelys shoes - the once-popular shoe with pop-out wheels in the sole - were piling up at stores and wholesalers, a sign the fad was fading.

Supply chains, Green said, “have become far more complex and difficult to understand, so clients rely on us for clarity.’’

But for all the outside sources of data, including credit card companies and Internet tracking firms, retail analysts and money managers say none of it can fully replace the experience of stepping into stores.

Joe Feldman, a retail analyst for Telsey Advisory Group of New York, said he and about 20 colleagues plan to fan out to more than 200 stores across the country today. Feldman, who grew up in Natick and planned to spend Thanksgiving in Massachusetts, said he would probably visit Shoppers World and other stores on Route 9 in Framingham shortly after midnight.

Then, after getting some sleep, he will hit the Natick Mall and other shopping centers. Like Dixon, the Fidelity fund manager, Feldman will visit some stores more than once to see if retailers that were packed after midnight still draw crowds at 2 p.m.

Those firsthand observations will supplement data from research firms. “You have to have both to put together the whole mosaic,’’ Feldman said.

Dixon said store visits are essential to verifying reports he receives from analysts and executives. It also helps him figure out whether rumors sweeping financial markets are true - information he can then use to make smart trades.

Over the past year, his mutual fund, which has about $328 million in assets, has risen 18.1 percent, including dividends, compared with 17.3 percent for an index of retail stocks and 8 percent for the Standard & Poor’s 500 index of large company stocks.

But as important as Black Friday has become, Dixon said you can’t judge the holiday shopping season based on a single date - especially with unusual door-buster sales, hordes of bargain hunters, and media attention not found on other key shopping days, such as the Saturday before Christmas.

“You have to put Black Friday in context,’’ he said.

Photos: Black Friday across the US