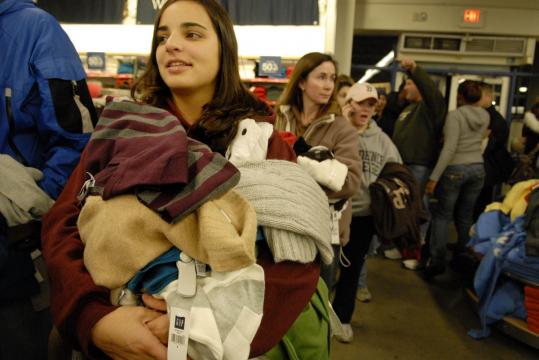 The day after Thanksgiving kicks off holiday shopping, but Mass. retailers aren’t allowed to gear up on the holiday itself. (Wiqan Ang for The Boston Globe/File 2006)
By Jenn Abelson Globe Staff / November 15, 2011

With the year’s biggest shopping blitz just 10 days away, major retailers across the country have already released their doorbuster deals and crowd-control plans for the Friday after Thanksgiving. But many merchants are scrambling to figure out one crucial detail: what time to open in Massachusetts.

Some chains that had promoted midnight sales are amending their early-bird hours to comply with the state’s 17th-century blue laws. The rules prohibit retail employees from working until the clock strikes 12 a.m. after Thanksgiving - leaving no time for staff to prepare for midnight openings.

In recent days, Walmart, Target, and Macy’s have all retreated from previously announced midnight promotions at their Massachusetts locations. Macy’s now plans a 12:30 a.m. opening on Black Friday, Target is scheduling a 1 a.m. start, and Walmart has pushed its kickoff to 4 a.m.

“The blue laws are clear as mud in Massachusetts,’’ said Jon Hurst, president of the Retailers Association of Massachusetts. “We’ve reminded some of the members informally that you have to be careful about the opening. Not only can you not sell on Thanksgiving, but there are also restrictions on labor working then.’’

Other national chains that have advertised midnight openings here, including Best Buy, Kohl’s, Disney Stores, and Toys “R’’ Us, could not confirm yesterday whether their plans remain in effect.

“Toys ‘R’ Us will fully comply with all Massachusetts laws, and I will update you if there are any changes to our store-opening schedule for Black Friday,’’ said Katelyn Leondi, a spokeswoman.

Wrentham Village Premium Outlets, which several years ago was among the first shopping centers to launch midnight sales, said it will not alter its early Friday start time.

“Wrentham Village Premium Outlets has always taken the proper steps to ensure that its Black Friday opening at 12:01 a.m. is in full compliance with state and local regulations,’’ the center said in a statement.

Apparently, that means employees need only one minute to gird for the onslaught of shoppers on Black Friday, typically the busiest shopping day of the year.

Hurst and officials at the Massachusetts Department of Labor Standards said they have spoken with merchants over the past several days to clarify the rules.

“We’ve gotten a lot of calls from many, many retailers on what the law is,’’ said Patricia DeAngelis, general counsel for the department.

“This agency has not issued a statewide permit to allow retail stores to be open or permit work on Thanksgiving Day or Christmas Day. The spirit of the law and intent is to give people a day off, and that is why this state has exercised that authority in the way it has.’’

Massachusetts is one of few states that restrict most shops from doing business on the holiday. In recent years, various retailers, including Whole Foods, CompUSA, and Super 88, have tried to challenge the state’s rigid blue laws. The laws, penned by the Puritans during the 1600s, were created to prevent Colonists from straying from church to drink or conduct business on the Sabbath. They include many regulations that are rarely enforced, such as a ban on dancing on Sundays.

The most stringent provisions were focused on protecting Sundays, but even those limitations have been weakened. Over the past three decades, the Legislature has permitted shops to open on Veterans Day and Columbus Day and allowed package stores to sell alcohol on Sundays. The blue laws do not apply to businesses such as pharmacies and food stores with fewer than three employees working at a given time.

The biggest opposition to changing the blue laws has involved protecting employees from feeling pressured to work on holidays. Workers in other states are also resisting retailers’ increasing intrusion into Thanksgiving.

Anthony Hardwick, a Target parking attendant in Nebraska who is required to start work at 11 p.m. on Thanksgiving, has collected more than 70,000 signatures for an online petition that asks the discounter to revert to its 5 a.m. opening on Black Friday.

In Massachusetts, merchants continue to object to blue laws, saying they are losing business to neighboring states and need longer store hours to meet consumers’ demands.

For retailers, Black Friday has long been considered the start of the holiday season. Merchants are eager to grab as much revenue as soon as possible - before competitors get the business, or consumers decide they have reached their spending limit. And this year, the margin for miscalculation is narrow: Spending is expected to increase only 2.8 percent, about half as much as in 2010, according to the National Retail Federation.

“Retailers know the law,’’ said Brad Puffer, spokesman for Attorney General Martha Coakley, “and they are required to follow those laws.’’