Despite deals, threats of foreclosure reported 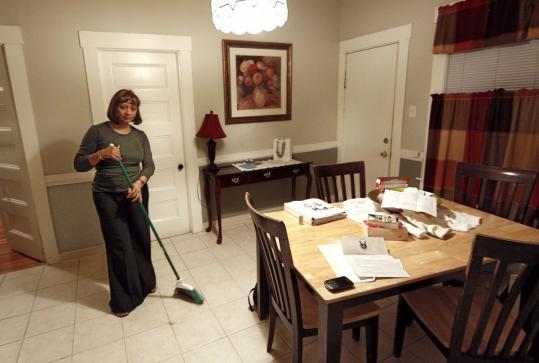 Maria Campusano of Lawrence contacted a lawyer after she was threatened with foreclosure and talking with bank employees did not resolve the problem.
By Jenifer B. McKim Globe Staff / October 17, 2011

Property owners in Massachusetts and across the United States say they are being threatened with foreclosure and assessed unfair fees by lenders even after signing agreements with those companies to make lower mortgage payments and stay in their homes.

Eight Bank of America borrowers - including two from Massachusetts - have filed a lawsuit against the nation’s largest bank, alleging it violated loan modification contracts, wrongly attempted to collect money from them, damaged their credit, and initiated wrongful foreclosure actions. They expect others to join the suit and are seeking class-action status.

Borrowers and housing advocates say the problem is a further indication of the mortgage industry’s ongoing woes.

Loan problems typically occur when one department at a lending company approves a modification - permanently lowering a homeowner’s mortgage obligation through interest rate or principal reductions - but does not accurately update the borrower’s records, housing advocates say. As a result, other departments may continue to classify the customer’s account as delinquent.

The frequency of such errors is a matter of some disagreement. Faith Schwartz, executive director of the nonprofit Hope Now Alliance, which represents businesses and housing counselors in the mortgage industry, said she was not aware of any serious issues with completed loan modifications.

“That is not something that has come up often,’’ Schwartz said.

But Kathleen Day, spokeswoman for the nonprofit Center for Responsible Lending, based in North Carolina, said the problem is widespread.

“It is all too common for banks to enter a loan mod and then try to foreclose on people and try to harangue them for money,’’ Day said. “All the evidence shows that servicing procedures and record keeping are just a mess. It ranges from disarray to out-and-out fraud.’’

Officials from the Treasury Department, which oversees the government-sponsored Home Affordable Modification Program, said homeowners should not experience difficulties with lenders after signing permanent modification contracts.

“If any instances arise that show that servicers have not been following guidelines, they are required to remedy their process and assess if any borrowers have been potentially impacted,’’ said Andrea Risotto, a Treasury spokeswoman.

Shennan Kavanagh, a lawyer with the Boston law firm Roddy Klein & Ryan - which filed the suit - said it is especially traumatic for homeowners who have gone through the stressful monthslong modification process to find they could still be at risk of losing their properties.

“There is complete and utter chaos in the servicing industry,’’ Kavanagh said. “These are supposed to be the lucky folks.’’

The complaints come as a group of state attorneys general negotiate with major US lenders following a yearlong investigation into allegations of sloppy and fraudulent foreclosures.

Massachusetts Attorney General Martha Coakley, who is participating in the talks, said this month that she is no longer confident they will be fruitful. Coakley said she is considering legal action against some lenders based on claims that they submitted fraudulent foreclosure paperwork or unlawfully attempted to seize homes. She did not specify which companies are being investigated.

Nearly 5 million homeowners nationwide have been granted loan modifications since 2007, according to the Hope Now Alliance. About 18,000 homeowners in Massachusetts have received such help from Bank of America alone since 2008, bank officials said.

A recent survey by the nonprofit Connecticut Fair Housing Center found that about 24 percent of 655 modifications around the country resulted in improper fees, credit report damage, or foreclosure notices.

“There are not enough penalties for getting things wrong,’’ said Jeff Gentes, managing attorney for foreclosure prevention at the center, based in Hartford.

The complications have added to the workload of foreclosure prevention counselors and staff at legal aid bureaus.

Nadine Cohen, managing attorney for the consumer rights unit at Greater Boston Legal Services, a nonprofit organization that helps low-income earners, said it can take months - even years - to straighten out confusion over a loan modification.

Roddy Klein & Ryan filed its suit this spring in US District Court in California, the site of the offices of BAC Home Loans Servicing LP, a Bank of America Corp. subsidiary that once administered home mortgages for the company. Earlier this year, BAC Home Loans was consolidated with Bank of America.

One of the plaintiffs, Maria Campusano, an executive secretary in Lawrence, said Bank of America granted her a permanent loan modification in April 2010, but she was later threatened with foreclosure.

Campusano, 44, said weeks after signing a contract that reduced her mortgage payment by several hundred dollars a month to $1,566, she received a bank statement that appeared to show no agreement had been reached. She eventually received letters from the bank telling her she was in default, although she consistently made payments for months.

Campusano said her credit rating suffered because of the mix-up. After failing to resolve the issue with several bank employees, she contacted a lawyer.

“Nothing was making sense,’’ Campusano said. “I started panicking.’’

William Roberson and his wife, Christina Perez, thought their housing troubles were over when Bank of America approved a loan modification for their Springfield, Vt., home in late 2009. The deal cut their mortgage payment by about $100 and rolled in some past debts.

The couple said the bank offered to help them after they fell behind on payments.

But within weeks of signing a loan modification contract, Roberson said, they began receiving letters and phone calls from Bank of America informing them they were in arrears on their mortgage.

In the meantime, the bank kept accepting the adjusted monthly payments dictated by the contract it approved, Roberson said.

He and his wife, who have temporarily moved to Connecticut for work, still own the Vermont home, but fear it will be seized by the bank. They joined the lawsuit in hopes of getting someone to pay attention to their dilemma.

“We were just a small person trying to challenge a monster of a bank and didn’t know where to go,’’ Roberson said.