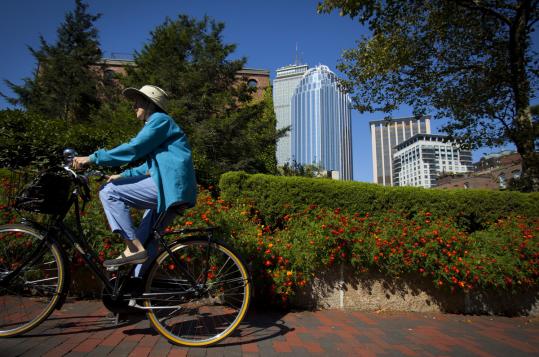 A woman rode her bike through the Southwest Corridor, one of Boston’s largest and most prominent public spaces. (DINA RUDICK/GLOBE STAFF)
By Casey Ross Globe Staff / October 11, 2011

For a casual passerby, it is easy to overlook the entrance of the Southwest Corridor Park, one of Boston’s largest and most prominent public spaces.

It presents itself along Dartmouth Street like an alley between commercial buildings, offering little indication of what lies just a few feet away: a plush, linear park that stretches for 4.7 miles, running from the Back Bay to Jamaica Plain.

That is all about to change.

Under a plan to build Boston’s tallest residential tower on nearby land, developer Simon Property Group and area residents are discussing construction of a striking glass gateway or public art display that would boldly announce the park’s entrance.

“It’s going to be something that draws your attention and causes you to cross the street from Back Bay Station,’’ said Jack Hobbs, president of The Collaborative Partners, which is managing the $500 million project for Simon Property. “Once you get there, there will be a pathway to invite you into the park itself.’’

The exact nature of the gateway has yet to be decided, as Simon gathers feedback from the city and neighbors. But the planned upgrades are part of a broader array of changes that many neighborhood residents hope will fundamentally alter public spaces at the edge of Copley Place that have long felt barren and unaccommodating.

Simon, which is promising the upgrades to help smooth the way for its 47-story residential tower, is also proposing to improve the chaotic pedestrian crossings in the area and build a glass-encased “winter garden’’ at the corner of Dartmouth and Stuart streets with retail kiosks, seating areas, and space for music performances and other events.

Some neighbors have questioned the idea of replacing the existing open plaza with a winter garden, saying the structure does not bear the hallmarks of a New England public space, feeling more like it could be in Houston, Los Angeles, or a dozen other cities. Others have welcomed the notion of a gathering space protected from harsh weather and wind.

Kairos Shen, chief planner for the Boston Redevelopment Authority, said the agency is working with the developer to ensure the garden reflects the culture of the city and does not become a glorified entrance to the Copley Place shopping center.

“There is an opportunity to create something that complements the outdoor spaces in that area of the city, so it becomes like Copley Square itself,’’ Shen said. “The goal and the challenge is to make it more like an extension of the street than an extension of the mall.’’

The winter garden would transition into an expanded Neiman Marcus store and Copley Place’s main retail galleries, which would become the base for Simon’s multitiered residential tower. The tower, designed by Elkus Manfredi Architects, is planned to contain about 318 new residences; the developer has not specified whether they will be apartments or condominiums.

If approved by the BRA and state environmental officials, it would be the largest building to be built in the city in several decades.

While city planners and residents noted the project’s unusual size, they said it provides an equally rare opportunity to improve surrounding sidewalks and plazas that are marred by uneven brick walkways, poor signage, and a lack of consistent activity.

“It’s amazing how many people live in this neighborhood and don’t know there is a park there,’’ said Franco Campanello, president of the Southwest Corridor Park Conservancy. He said the park’s entrance across from the Back Bay MBTA Station needs new seating, cafe tables, better landscaping, and public art to cause people to pause and explore the area.

“They have to reconfigure the space.’’ he said. “It needs to be somewhat of a refuge away from the noise of Dartmouth, yet it also needs to maintain a sense of a pedestrian thoroughfare.’’

Negotiations over the tower and park designs are expected to continue for several weeks. A citizens advisory committee is reviewing the plans, as is the BRA, which is expected to vote on whether to approve the project later in the fall.