First taste of the Wegmans experience 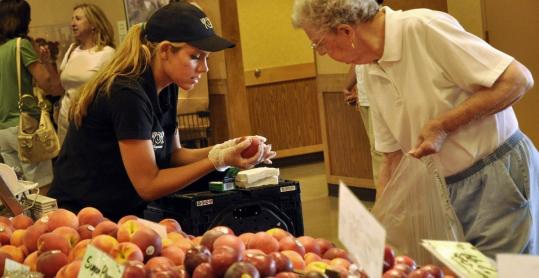 Wegman, whose namesake supermarket company has won a pile of customer service and best-workplace honors, is known to have a weakness for the product samples his stores feature. His appetite for competition is similarly voracious.

The New York chain, with 78 stores in five states, will open its first market next Sunday in Massachusetts, a food emporium so massive it will instantly be the largest grocery in New England.

The arrival of a Wegmans in Northborough is likely to raise the stakes for every grocery seller in the region. While the company has fewer stores than other supermarket chains, its combination of natural and organic products (like Whole Foods ), bulk merchandise (like BJ’s Wholesale Club), and low prices (like Market Basket) give it an outsized presence in the industry.

Wegman, 64, wiry and ginger-haired, visits the Pittsford store, in a suburb of Rochester, at least once a week. On this day, shoppers run up to him as if they have spotted a long-lost friend and he returns the affection. Between greetings, he poses for a photographer, dressed in a loose-fitting blue silk shirt emblazoned with a brick print. Not exactly corporate-conservative.

And then he disappears - just as a spokeswoman earlier predicted. If there’s a customer in need of attention, or a food sample to be had, Wegman will be off in that direction, she warned.

Everyone in the place seems, to a skeptical visitor from Boston, unnaturally happy to be here. Hunting for someone who isn’t completely taken by the Wegmans experience, a reporter spots a woman with an empty cart. Maybe she can’t find her favorite cereal. Turns out Nancy Reale has just started shopping.

“When you’re in Wegmans, it feels very personal. You get to know everyone and it feels like stores within stores,’’ says Reale, who moved from Massachusetts to Rochester in 1976. “In Boston, supermarkets were very impersonal, just a group of shelves with people stocking them. We’re never going to move away from our Wegmans. They are always imagineering.’’

It’s this kind of zeal that has local grocery store operators on edge as the 95-year-old family-owned company prepares for its debut. The 138,000-square-foot store - double the size of an average Stop & Shop - will feature some trademarks from Pittsford: a cheese shop with 300 domestic and imported varieties; a Mediterranean bar with more than 100 offerings like olives and hummus; a make-your-own trail mix bar; and chef-prepared meals for $6. Employees will chop fresh fruit and vegetables in the produce aisles so customers can take home customized stir fries and salads.

“They are one of the finest run grocery chains in America, hands down,’’ says Kevin Griffin, publisher of The Griffin Report of Food Marketing, a Duxbury trade publication. “Wegmans has a winning formula that’s proven no matter where they go and they certainly are a threat to any grocery chain around.’’

It’s taken more than 15 years for the company to break into Massachusetts, according to Danny Wegman. He blames tight real estate and competitors for keeping out the chain. The supermarket business is brutally territorial, according to retail and real estate insiders. For instance, they say, established stores will sometimes lease or buy vacant space in nearby shopping plazas to block rivals.

Officials from the region’s largest grocers, Shaw’s Supermarkets Inc. and Stop & Shop Supermarket Cos., declined to comment on real estate issues Wegmans may have encountered in its search for locations in the region.

Persistence finally allowed Wegmans to grab a lease in Westwood in 2009. But financing problems for the developer have stalled that project. Meantime, the chain secured the Northborough lease and recently made a deal for space in Burlington. Wegmans’ strategy is to find sites in densely populated areas with attractive income demographics and easy highway access.

“Whether competition weakened or got tired of trying to block people, I don’t really know,’’ Wegman says. “Things have kind of worked out so that here we are.’’

Danny Wegman has helped turn the food business his grandfather founded in 1916 into a $5.6 billion company.

It has taken nearly every top retail honor available, including an award from Child magazine for being “the most family-friendly supermarket in America.’’ Wegmans has made Fortune’s annual list of 100 best companies to work for since 1998. Even actor Alec Baldwin paid tribute, giving the supermarket a shout-out on David Letterman’s TV show and offering last year to appear in a commercial with his mother and Danny Wegman.

Back in Pittsford, Wegman is missing again. Fortunately, Elena Lefkus, the head of the cheese department, is available to fill the gap. At Wegmans, Lefkus says, she found a fulfilling career - and love. She met her husband, John Lefkus, at a Wegmans, and the company even catered their wedding. Now the couple is moving to Massachusetts to help open the new store.

The chief executive is finally tracked down in the meat department - behind the charcuterie counter, wearing a metal-mesh safety glove, and using a Berkl hand-cranked slicer on an Iberico ham. “There are more things to eat here than you can get anywhere else,’’ Wegman says in between bites of ham. It’s probably true: a typical Wegmans has 70,000 items compared with roughly 45,000 at a traditional supermarket.

Wegman eventually rejoins the tour, with Colleen Wegman, his daughter and company president, not far behind. The already cheerful Colleen perks up even more as she walks through Nature’s Marketplace, a section brimming with natural products that she launched after returning from college in Colorado in the mid-1990s.

Wegman’s other daughter, Nicole, oversees the chain’s wine operations, which offer more than 1,500 wines, 800 spirits, and 600 varieties of domestic and imported beer.

The everything’s-rosy-world-of-Wegmans is momentarily interrupted by talk of the recession. In 2008, the chain decided to slash prices on dozens of basic items, such as vegetables, cereals, meat, and poultry - cuts that Wegmans says cost it $12 million annually.

This year, the company froze prices on 40 items until January 2012. To compensate for the down economy, Wegmans has adjusted its business over the past several years by reducing inventory expenses and controlling labor costs.

A few aisles later, the father-and-daughter team admire their line of pet products, which feature photos of Danny’s cats, Buju and Ziggie, and Bruiser, his Bernese Mountain dog, who died several years ago.

“The number one difference between us and almost everybody else is that we are a family business,’’ Danny Wegman says. “As companies have gone public, it’s begun to change the feeling in the stores. But at Wegmans, we’ve got 40,000 people who work for us and 20 percent of them are related.’’

To make sure that family feeling is transferred to Northborough, the company is spending $2.9 million on training and dispatching nearly 1,000 employees from other stores to pitch in for a few weeks. And 75 of the 600 permanent workers in Northborough are coming from other Wegmans supermarkets.

Meantime, the buzz keeps building. Nearly 18,000 people have signed up online for the Northborough store’s discount card - close to a preopening record, store officials say - and it already has more than 3,400 Facebook fans.

Gretchen Kinder of Hingham, is one of them. She is renting an RV with friends - dubbed the Weg-a-Bago - and might camp out in the parking lot for the opening. “It’s more than a grocery store,’’ says Kinder, who grew up with a Wegmans in Syracuse, N.Y. “I travel to see my family four times a year. The first stop before I see my mother is the Wegmans. And it’s the last thing I do before I leave.’’

Wegmans store to open in Northborough