Once again, Christel McCarthy packed her blue hat, her company travel bag, a flight manual, and serving utensils - all the gear she carried as a working stewardess in the days before they were called flight attendants.

McCarthy first flew for Pan American World Airways, or Pan Am, in 1965. That’s the era captured by the new ABC network television show named for the former airline, once an icon of sophisticated world travel. She would jet away from Logan International Airport for 14-day shifts, flying between faraway destinations from Lagos to Lisbon.

“The job was an education in the ways of the world, and why politics were the way they were,’’ she recalled.

McCarthy, who lives in Lexington, is one of 400 former flight attendants who touched down in Boston this week for the World Wings International conference, an annual gathering for the nonprofit philanthropy established by former Pan Am employees to raise money for charities. The reunion is being held at the Boston Park Plaza Hotel, formerly known as The Statler Hotel, where airline crews stayed in the glory days of jet travel.

This is the first time since 1975 that the reunion is in Boston: The last two were held in Tokyo and Quebec. They gather to reminisce about their years in the air, when they were the faces of Pan Am, wearing pristine blue uniforms with matching hats and white gloves.

This year, they also have the TV show to talk about. “Pan Am’’ takes place in the 1960s, when there were few jobs for women outside of teaching, nursing, or secretarial work.

The show’s producers said the program provides viewers with a glimpse of the dawn of the jetliner age, and new horizons for women: the freedom and opportunities that stewardess jobs presented in the 1960s. “They did it right, with the excitement of flying in the young women, and the independence of the young women, and their ability to stand by themselves, which was rather unusual and harder in the ’60s,’’ said McCarthy, 70, who flew with the storied airline from 1965 until 1976. The airline stopped service from Boston in 1978.

Nancy Hult Ganis, one of the show’s producers, was studying to be a school teacher for inner-city youth in the late 1960s in California when she saw recruitment posters for Pan Am.

She applied for a job with the airline to have a better understanding of the world, Ganis said.

Ganis flew out of New York, Boston, and San Francisco to Australia, Africa, and the islands of the South Pacific during her seven years with Pan Am.

“I realized I was too green, that there was so much more that I needed to learn,’’ she recalled. “It was an opportunity to travel and experience things that really young girls didn’t have the opportunity to do on their own.’’

“These are women who stepped into a male-dominated career,’’ said Cathy Perron, a professor of film and television at Boston University. “It was their ticket to all of these exotic places that they would not have had access to.’’

The show, which had a huge debut in Boston - 259,000 viewers, out of 11 million nationally - follows a group of ambitious young stewardesses as they jet around the world from New York. One character abandoned her fiancé to become a stewardess with her sister. A French-born stewardess discovers American life through her travels. Another stewardess, a bohemian type played by Christina Ricci, leads the new hires in their work duties.

Ganis said some of the stories in the show were inspired by her own experiences and those of others who flew with the airline. Although the show glamorizes the job, it also depicts some of the challenges women faced before gender discrimination became a serious issue in the workplace.

These former flight attendants had regular weight and girdle checks. They had to comply with strict figure-hugging uniform requirements (skirts, gloves, hats, and heels).

“It wasn’t perfect,’’ said Ganis, in town for the conference. “We maneuvered through the land mines of the time. There was certainly a lot of misogyny and expectations about what a single young girl out on her own would be available to do.’’

Some of the former stewardesses in Boston this week have tuned in to the show, which they said presents a dignified portrayal of their duties despite what they call some Hollywood flourishes.

For one, the pilots they flew with were mostly World War II veterans who were about 40 to 50 years old. In the show, the pilots are men in their 20s.

Also, the women’s hair couldn’t fall below their jaw line.

“The hair on the show is a little longer than we had ours,’’ said Carol Guerrin, president of the group’s Boston chapter, which has about 40 members. “They also don’t show how much work went into the galley, [although] overall, it’s historically accurate.’’

At this year’s conference, various Pan Am chapters from locations such as Miami and Oakland, Calif., will sell items to raise money for their local and international charities. Classic Pan Am-themed travel bags will also be sold by Pan Am Brands, the Dover, N.H., division of a regional railway company that owns the storied Pan American World Airways name.

Some of the women toted their classic travel work bags, which feature the familiar blue-and-white Pan Am logo, to the conference - just like they were back on a layover at Boston’s Park Plaza. 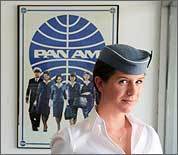