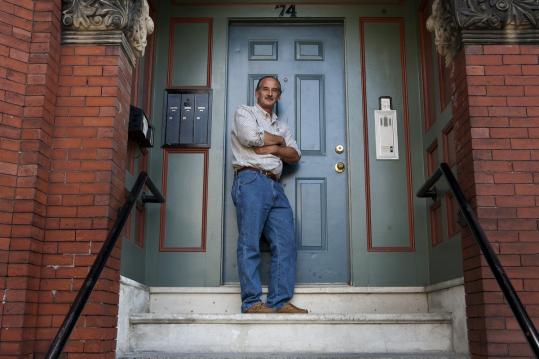 Michael Stella, a Dorchester developer, typically doesn’t seek a loan until after a property is renovated. (Kayana Szymczak for The Boston Globe)
By Jenifer B. McKim Globe Staff / October 2, 2011

More than a third of homes sold this year in Massachusetts, from gritty fixer-uppers to multimillion-dollar estates, have been paid for in cash as an increasing number of buyers decide to sidestep the traditional, and increasingly burdensome, mortgage process.

Cash sales accounted for 34 percent of residential real estate transactions through August, compared with about 22 percent during the first three quarters of last year and 20 percent for the same period in 2009, according to data provided by the Warren Group, a Boston company that tracks local real estate.

“Clearly, there is more cash and more liquidity in the marketplace than we ever imagined,’’ said Kevin Ahearn, president of Otis & Ahearn Inc., a Boston real estate firm.

Real estate agents say cash buyers include baby boomers downsizing to Boston condominiums with profits from the sales of their suburban houses, well-off parents purchasing homes for college-age children, and investors seeking discounted properties they can rent or sell.

They are turning to cash for various reasons, including tighter lending guidelines that have made mortgages less attractive, dwindling bank financing for investment properties, and a volatile stock market that has sent people looking for other places to put their money.

The Massachusetts cash purchase trend is in line with national numbers. Across the nation, about 31 percent of all August home sales were in cash, the second highest percentage since February, when it reached nearly 34 percent, according to a survey by the Maryland-based trade publication, Inside Mortgage Finance.

Inside Mortgage Finance publisher Guy Cecala said investors - buyers who are not purchasing properties as their personal residences - are largely resorting to cash because lenders consider such deals too risky to finance in a stagnant real estate market. Other buyers, he said, believe buying a house at today’s lower prices is preferable to taking a chance on stocks. “They don’t have a better use for the money,’’ Cecala said.

Roxbury, downtown Boston, and Cambridge are at the top of the list of areas with the highest percentages of mortgage-free deals. Recent cash closings in Boston included the sale of former player Manny Ramirez’s $5.6 million condo at the Residences at the Ritz-Carlton Towers, a $5.4 million condo deal at the Mandarin Oriental, and a $3.4 million sale of a Beacon Hill penthouse, public records show.

Brian Bethune, an economist at Amherst College, said wealthy buyers may want to take advantage of deep discounts in the high-end market rather than watch their money flounder in stocks and bonds. He said the stock market overall has done better than housing during the last six years, but given stock performance of late, current discounted home prices seem like especially good values.

“If your dream is to have a spectacular waterfront house, now is the best time to buy,’’ Bethune said.

Davis Rowley, sales manager at Hammond Residential Real Estate in Cambridge, said that of six offers he recently received for a property, three were in cash. He said some sellers are more willing to reduce their prices if they don’t have to worry about a buyer’s financing situation or a low appraisal scuttling the sale. As lenders have grown more conservative in an effort to avoid the kinds of mistakes that led to the subprime mortgage crisis, the loan process can take months to complete.

“It’s a huge headache taken off the plate,’’ Rowley said of cash offers.

Tracy Campion, owner of the high-end Newbury Street real estate agency Campion & Co., said many of her clients buy homes with cash to speed the sales, and later apply for a loan. “They say, `We are all cash and we want to close,’ ’’ Campion said. “The sellers like that. They expect no mortgage contingencies on a high-end deal.’’

It’s not just pricey deals that are being completed without mortgage brokers and appraisers. In Roxbury, a Boston neighborhood plagued by foreclosures and a steep drop in home values during the last several years, more than half of the property sales so far this year have been made with cash, according to Warren Group data.

For developer Silvian Robinson, using cash to buy real estate is nothing new. Robinson said that’s how he’s been purchasing abandoned and foreclosed homes in Roxbury and Dorchester for two decades. After making repairs and renovations to the properties, he eventually sells them at a profit. Robinson said he performs an important service because many first-time homeowners cannot get financing themselves to purchase run-down homes and make them livable.

But even though he is able to buy homes at deep price cuts, selling them remains a challenge in the current market. “I’m getting a lot of good deals, but I’m holding them longer,’’ Robinson said.

Dorchester developer Michael Stella said lenders generally shy away from selling foreclosed homes to people who need a mortgage because there is more risk of complications. Homeowners needing financing are largely barred from foreclosure auctions because the deals need to be finalized within 30 days. That’s usually not enough time to secure a loan, Stella said.

Stella’s strategy is to buy and rehab a home and then rent it out. Typically, he doesn’t seek a loan until after a property is renovated. As prices have dropped in recent years, Stella said, he has been buying more homes.

“When the bottom dropped out and the same units were back on the market, they became worth one third of what they sold for,’’ he said.

Lori Nery, owner of Coastal Realty in New Bedford, said out-of-town investors have been inquiring about buying properties in the struggling coastal city, where nearly half of this year’s sales have been cash-only. “I think the word is out we are a good bargain,’’ Nery said.

Real estate agents said they are also hearing from more international investors interested in Boston-area properties. Shahan Missaghian, an agent with Coldwell Banker Residential Brokerage in Brookline, said a growing number of Chinese investors are eager to pay cash for multifamily homes in Brighton. She said they are attracted by Brighton’s proximity to Boston College and Boston University, as well as other universities and hospitals.

Chinese investors are generally conservative, Missaghian said, but sometimes they take unusual factors into consideration. For example, one particular home was recently sought after simply because its street address features the digits “88,’’ a combination considered lucky by the Chinese.

“The feng shui has to be right,’’ Shahan said. “They are buying with cash.’’

Matt Carroll of the Globe staff contributed to this report. Jenifer B. McKim can be reached at jmckim@globe.com.