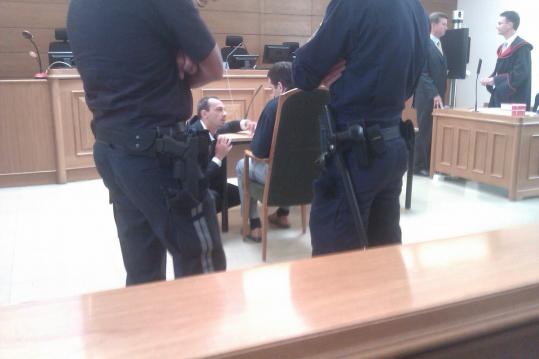 KLAGENFURT, Austria - A court yesterday found an engineer guilty of stealing wind turbine technology from American Superconductor Corp. and giving it to a Chinese turbine maker that is a former customer of the Devens company.

After a three-hour trial, Dejan Karabasevic, 38, was sentenced to one year in jail and two years probation for passing proprietary turbine control software to Sinovel Wind Group Co., based in Beijing. Karabasevic, who worked in American Superconductor’s subsidiary in Austria, was also ordered by Klagenfurt district court officials to pay his former employer roughly $270,000 in damages.

“I made the biggest mistake of my life,’’ Karabasevic said before the jury began deliberations, “and I am deeply sorry for it.’’

American Superconductor is pursuing separate claims against Sinovel, which it believes is using the company’s electronic software code illegally.

“This sentence was an important first legal step for AMSC,’’ said company spokesman Jason Fredette. “This individual’s admittance of guilt and collusion with Sinovel demonstrates the strength of our commercial, civil, and criminal cases against Sinovel in China.’’

American Superconductor, which makes control systems and other advanced technologies for wind turbines and power utilities, began to suspect Sinovel of theft in June, when an American Superconductor crew inspecting turbines in China found an imperfect replica of its software in a Sinovel turbine. An investigation led American Superconductor officials to Karabasevic, who was arrested in Austria in July. Earlier this month, the company also filed suit against Sinovel, which denies any wrongdoing.

According to an indictment filed in the public prosecutor’s office in Klagenfurt, Karabasevic had developed “increasingly strong ties’’ with Sinovel as the “result of numerous business trips to China.’’ Karabasevic, the indictment states, was paid at least $20,700 to copy codes downloaded from American Superconductor’s network, and use them to help Sinovel upgrade versions of the US company’s software that he said the Chinese company had already “cracked.’’

Yesterday in court, Karabasevic’s lawyer, Günther Huainigg, said his client’s actions stemmed from “frustration’’ about a failed marriage, which had been strained by his trips abroad for work as a department manager involved in software development, followed by a demotion to the customer service department last year. Karabasevic believed he was undervalued at AMSC Windtec, the American Superconductor subsidiary in Klagenfurt, according to Huainigg.

Karabasevic in April downloaded American Superconductor software to his notebook computer and transferred it to Sinovel using his Gmail account, said Thomas Liensberger, the state prosecutor in Klagenfurt.

Florian Kremslehner, an attorney for American Superconductor, said there is evidence that Sinovel wooed Karabasevic by offering him an apartment, a five-year contract at twice his current pay, and “all the human contact’’ he wanted, “in particular, female co-workers.’’

Kremslehner said yesterday that American Superconductor now believes the theft of its software by Karabasevic was the catalyst that caused Sinovel - once its largest customer - to stop accepting shipments from the Devens company earlier this year.

As a result, American Superconductor’s stock plunged nearly 80 percent and it cut 150 jobs, about 30 percent of its workforce. The company yesterday reported a net loss of $37.7 million for its first quarter, and said revenues for that period were $9.1 million, down from $97.2 million a year ago.

In a conference call about its earnings yesterday, American Superconductor chief executive Daniel McGahn said Sinovel still owes the company at least $250 million for products it ordered. McGahn, however, remained upbeat, saying that he believes Karabasevic’s admission of guilt and conviction “demonstrates the strength of our case’’ against Sinovel.

The company’s stock rose 13.65 percent yesterday on the Nasdaq stock exchange, to close at $5.08 a share on word of Karabasevic’s conviction and the news that American Superconductor has signed nearly $100 million worth of new contracts since April with customers in China, India, South Korea, Europe, and the United States.

“While China has been the catalyst for our past growth,’’ McGahn said, “we expect our success, going forward, to be driven by a more diverse base of customers across a broad spectrum of geographies.’’

Eugen Freund reported from Austria. Erin Ailworth can be reached at eailworth@globe.com. Follow her on Twitter @ailworth.