A higher profile, by design 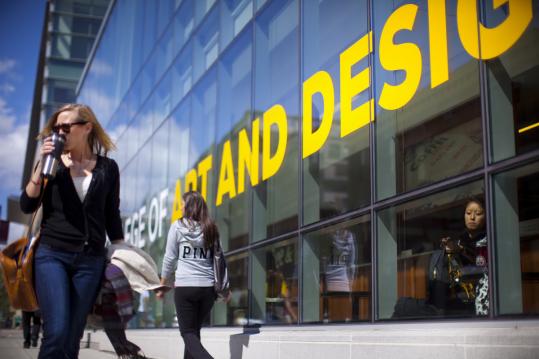 The Massachusetts College of Art and Design, the oldest public arts school in the country, is pursuing a $120 million expansion and redesign of its campus along Huntington Avenue, joining a slew of colleges and museums whose building projects are rapidly redefining Boston as a hub for contemporary art.

The college last night unveiled plans for a new design and media center and an overhaul of its public galleries, which, unbeknownst to many, house New England’s largest free exhibition of contemporary art.

The plans are part of an expansion meant to give MassArt a higher profile in a district where new buildings and museum wings are not only expanding the area’s art institutions, but filling the landscape with striking architecture.

The college has reached 90 percent of its fund-raising goal, with the help of a $30 million appropriation from Governor Deval Patrick’s administration.

“These projects will make the college more visible and accessible. The new architecture conveys an open-armed invitation to MassArt,’’ said Dawn Barrett, president of the college, which has an undergraduate enrollment of 1,700 students. “We talk of the importance of transparency for our institution, and that concept will be quite literally rendered in the design of these buildings.’’

The project is unusually large and expensive for a small public college, especially one devoted to the arts. MassArt is raising most of the money from private sources - including corporations, individuals, and foundations - and from tax-exempt bonds.

A 493-bed dormitory is currently under construction, to be completed next year, and upgrades being considered would update the technology and design of its classroom and community spaces.

The project is also meant to better connect the college to nearby institutions such as the Museum of Fine Arts, which just opened a contemporary art wing, and the Isabella Stewart Gardner Museum, which plans to open a major addition in January.

“The Avenue of the Arts is really coming of age now,’’ said Mayor Thomas M. Menino, referring to the name given to that stretch of Huntington. “You can see the excitement and activity there. And the MassArt project will make it even more attractive for students to come to Boston and contribute to the creative economy.’’

The college’s galleries and design center will be fitted with glass entryways that will give the school a brighter, more modern presence. Its 6.4-acre campus sits on the edge of the Fenway’s burgeoning cultural and academic cluster. That work does not involve construction of buildings, but the renovation of existing structures that will look completely different, inside and out.

The design center will be fashioned from an existing gymnasium that will get new studios, media laboratories, and classrooms. It is being designed by Ennead Architects LLC of New York, which is known for its work on museums, performing arts centers, and educational buildings. The firm designed former President Clinton’s library in Little Rock, Ark., the expansion of Yale University’s art gallery, and WGBH’s new headquarters in Brighton.

MassArt’s main galleries, known as the Bakalar & Paine Galleries, will be completely overhauled and updated. The work will include new air conditioning units and upgrades to make the galleries accessible to the disabled.

The architects for that project, Machado and Silvetti Associates, have designed a triangular glass pavilion to provide a more welcoming entrance to the 1907 building and will add spaces for community learning, including a 150-seat performance and lecture hall.

“This will really put this institution where it should be in terms of visibility,’’ said Rodolfo Machado, a partner at the firm who is working on the MassArt project. “It produces very good work, and right now it does not have the impact on the culture of Boston that it should have.’’

The college, established in 1873, was the first public arts college and remains the only freestanding school of its kind in the country. It offers undergraduate and graduate degrees and programs focused on photography, art history, architectural design, painting, and other disciplines. About 70 percent of its students are from Massachusetts, who pay in-state tuition of around $8,400.

Because the school is on state-owned property, it does not need approvals from the Boston Redevelopment Authority, although it is collaborating with city officials on design plans.

Officials in Patrick’s administration said the project is near the top of the list of planned upgrades at state colleges.

“This project is really going to enhance what this school can do,’’ said Liz Minnis, acting deputy commissioner at the Division of Capital Asset Management. “It’s a very affordable, urban school, and it’s established a lot of key partnerships with Northeastern University and Wentworth Institute of Technology.’’

Those nearby schools are also expanding.

Northeastern recently opened a 1,200-bed dorm, and Wentworth is expanding and renovating academic buildings and recreational facilities. It is also planning to build a new dormitory and engineering center and to relocate its athletic fields.

Barrett said MassArt’s expansion is designed to enhance its connections to its academic neighbors and to inspire students with the kind of innovative design it pushes them to pursue.

“One could use a lot of flowery metaphoric language about how these buildings will be beacons,’’ she said, “but one of the things that’s most important for an institution of higher education is to practice what you teach.’’

A look at the changes at MassArt