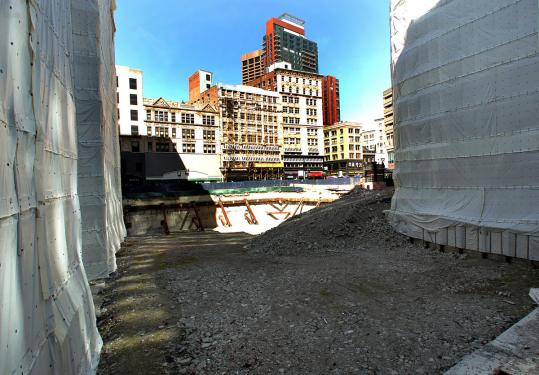 The former Filene’s property in Downtown Crossing has been quiet since work was halted in 2008, sparking the mayor’s fury. (John Tlumacki/Globe Staff/File 2010)
By Casey Ross Globe Staff / September 14, 2011

After months of fighting and inactivity on the Filene’s site in downtown Boston, the city’s top development official signaled a willingness yesterday to work with its New York owner to devise a plan to restart construction on the blighted property.

Boston Redevelopment Authority director Peter Meade said Vornado Realty Trust is “likely to be part of the solution’’ at the Downtown Crossing site where it halted work three years ago and left a massive crater in the heart of the city.

His comments, delivered at a Greater Boston Chamber of Commerce breakfast, marked a shift in the city’s rhetoric about the investment firm after months of rocky relations. The BRA revoked its permits for a $700 million project that would have included offices, stores, residences, and a hotel. The firm then put the site up for sale in late 2010 but has yet to attract an acceptable bid.

Meade made clear that a sale now seems unlikely because Vornado would have to unload the property at a loss, and he said Mayor Thomas M. Menino has directed him to talk with the firm’s executives about other ways to move forward.

“I’m going to continue speaking with them,’’ he said, adding later: “I’m pleased with the tone of the discussions.’’

Following its usual practice, Vornado yesterday did not respond to Meade’s comments and would not discuss its intentions for the property, which sits at the corner of Washington and Franklin streets, in the center of a historic but sleepy shopping area the city is trying to revitalize.

Vornado, the lead investor in a partnership that owns the site, stopped work in the summer of 2008 on a 39-story tower that was to serve as a catalyst for that revitalization, instead allowing it to become a blighted site that has served as a drag on efforts to improve the district.

Several local and national developers expressed interest when Vornado put the property on the market, but the firm received bids only around $50 million, a sum that would force it to accept heavy losses on the $200 million the firm and its partners have invested in the site so far.

Meade said yesterday that the company otherwise appears to be performing well financially, but he noted it has not put forward a specific proposal to proceed with a redevelopment on the Filene’s site in the near term. Vornado reported funds from operation of nearly $750 million in the first six months of the year, and has continued to pursue real estate projects elsewhere, including a $3 billion skyscraper over Penn Station in New York.

The Filene’s project must be reconfigured to help it attract financing that has become scarce in the economic downturn. It still must secure leases with retail tenants such as Target and Filene’s Basement, both of which have expressed interest in opening in the development. And it also must determine whether offices and residences still work on the site, and how much space should be devoted to each component. Then it must get new permits from city officials.

Given the tortured history of the project, Meade said the city is proceeding with caution in discussions and will not entertain any proposal unless the partners have lined up financial support. At the same time, he said, resuming development of the property is a major priority, and it is the one he gets asked about the most.

“I get asked about the Filene’s site at home, at work, when I’m shopping, at the ball game, outside of church, walking the dogs, and yes, in the mayor’s office,’’ Meade said. “I can’t avoid it, and I won’t.’’