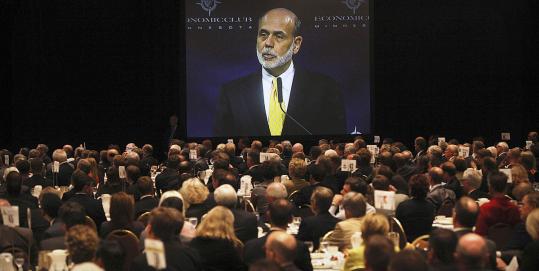 WASHINGTON - Ben S. Bernanke, the Federal Reserve chairman, offered a new twist on a familiar subject yesterday, revisiting the question of why growth continues to fall short of hopes and expectations.

Bernanke, speaking at a luncheon in Minneapolis, offered the standard explanations, including the absence of home construction and the deep and lingering pain inflicted by financial crises. He warned again that reductions in government spending amount to reductions in short-term growth.

Then he said something new: Consumers are depressed beyond reason or expectation.

Oh, sure, there are reasons to be depressed, and the Fed chairman rattled them off: “The persistently high level of unemployment, slow gains in wages for those who remain employed, falling house prices, and debt burdens that remain high.’’

However, Bernanke continued, “Even taking into account the many financial pressures that they face, households seem exceptionally cautious.’’

Consumers, in other words, are behaving as if the economy is even worse than it actually is.

Economic models based on historic patterns of unemployment, wages, debt, and housing prices suggest that people should be spending more money. Instead, just as corporations are sitting on their money, households are holding back, too.

Why? Well, one possibility is that Americans collectively are suffering from what amounts to an economic version of post-traumatic stress disorder.

“People are on edge waiting for the other shoe to drop,’’ John Williams, the president of the Federal Reserve Bank of San Francisco, told the Seattle Rotary Club on Wednesday. “In fact, the latest consumer sentiment readings are near the all-time lows recorded in late 2008 during the most terrifying moments of the financial crisis.’’

Moreover, the national mood is souring. Williams noted a recent survey finding that 62 percent of households expected their income to stay the same or decline over the next year, the bleakest outlook in three decades.

“It’s hard to have a robust recovery,’’ he said, “when Americans are so dispirited.’’