A fierce competition is shaping up for gambling licenses in Massachusetts, with nearly a dozen casino moguls and developers jockeying to build four facilities that would be allowed under new state legislation.

Casino developers who see the state as an untapped market began unfurling their proposals just hours after the release of legislation Tuesday that, unlike prior gaming bills, has the support of legislative leaders and Governor Deval Patrick. Many of the proposals are backed by national and international gaming interests that operate some of the world’s largest casinos.

Most of the pitches involve resorts with thousands of slot machines and table games, towering hotels, and a long list of amenities. Some developers spoke of revitalizing downtowns and pumping revenue into cash-strapped communities, while others promised golf courses, retail and restaurant complexes, and glittering entertainment halls. One plan even includes a waterpark.

The bill would authorize three Las Vegas-style casinos in three regions, and a fourth gambling hall with up to 1,250 slot machines that could be located anywhere in Massachusetts.

By dividing the state into three regions and designating one casino for each, the legislation is designed to attract firms prepared to invest more than $500 million. It is setting off a complicated pairing-off process between gaming operators and property owners with enough land to accommodate the full-scale gaming resorts envisioned.

Casinos would be sited in three regions: the northeast, an area stretching from Boston to Worcester to the new Hampshire border; the southeast, encompassing Fall River, New Bedford, and Cape Cod; and the west, including Palmer and the Connecticut River valley.

“What is being proposed in Massachusetts is in the sweet spot of what our company does, and so we are very interested,’’ said Eric Schippers, a spokesman for Penn National Gaming, Inc., which operates 26 gambling facilities in 17 states and Ontario and would focus on western Massachusetts locations if the Legislature approves casinos.

Mitchell Etess, chief executive of the Mohegan Tribal Gaming Authority, which operates the Mohegan Sun resort in Connecticut, is also looking at a site in the western part of the state, off the Massachusetts Turnpike in Palmer, where it wants to build a casino with 3,000 slot machines, a 600-room hotel, and retail stores.

“We are going to create a great destination resort, and we know we have the best site in western Massachusetts,’’ said Etess. “We know we are proven operators and among the best brands in gaming in the Northeast.’’

Developer David Nunes wants to build an $850 million casino and hotel with shops and restaurants at the intersection of interstates 90 and 495 in Milford.

“If this is a straight-up competition about which location will produce the highest returns for the Commonwealth, there is no doubt in my mind that our site will deliver,’’ said Nunes, who is partnered with casino mogul Bill Warner, owner of Warner Gaming and chief executive of the Hard Rock Hotel & Casino in Las Vegas.

His biggest rival in the region will be Suffolk Downs, which is situated in the district of House Speaker Robert DeLeo and has the backing of Richard Fields, who has developed two major casinos in Florida. “Should a bill pass, we look forward to competing for the opportunity to develop a world-class destination benefiting the city of Boston, said Chip Tuttle, the horse track’s chief operating officer.

Another track operator, George Carney of Raynham Park, said his phone was trilling constantly with casino executives talking of potentially lucrative partnerships. He spoke like a man in the catbird seat, as his property is situated near Interstate 495 and Route 24, along the proposed Southcoast rail line. He has already invested in water, sewer, and electrical upgrades to the 125-acre site.

“I have several suitors,’’ Carney said of the casino companies that have beat a path to his door, and “the ones I have have plenty of money.’’

The chief executive of Plainridge Racecourse, Gary Piontkowski, said he too has been courted by casino interests but said so far, it’s all talk.

“Everybody wants to come around and kick the tires,’’ he said, but “no one’s made an offer in writing.’’ For now, Piontkowski and his partners at Plainridge, which operates harness racing, intend to bid for the slots-only license and said they have the capital to compete.

Casino operators are drawn to Massachusetts for its wealthy population and because the Northeast has fewer gambling facilities than other parts of the country.

“It does define who can compete,’’ Anthony Cignoli, a partner in Paper City Development Co., which has targeted a site off Interstate 91 in Holyoke, said of the financial thresholds set by the legislation. The bill “does dictate that you’ve got to bring in a major player. This not for the faint of heart or a small player, to come to Massachusetts.’’

Paper City’s team includes several Western Massachusetts business people and is led by Joseph Lashinger Jr., a former Pennsylvania lawmaker who was involved in the development of a casino in his home state and has worked for other gaming companies. Cignoli said the team has had discussions with several “major’’ casino operators.

Two casinos are being pitched in New Bedford. Northeast Resorts is holding a 35-acre plot off Interstate 195, although a spokeswoman for the company said it is negotiating a sale of the property, to an unspecified entity.

KG Urban Enterprises, which teamed with Las Vegas Sands Corp. to build a casino at the former Bethlehem Steel plant in Pennsylvania, is proposing to redevelop a former power plant in New Bedford into a casino with 3,500 slot machines, table games, and a hotel with 634 rooms. The waterfront site would also include a second hotel in later phases.

“I could execute on this project tomorrow and turn it into a casino within 24 months,’’ said Andrew Stern, a principal of the firm. “We don’t want to build a feudal manor and keep everyone inside. The project is on the city grid, and we want it to be part of the city.’’

Perhaps the biggest wild card in the contest is the Mashpee Wampanoag tribe. While the tribe has devised plans for a destination resort with meeting rooms, hotels, retail, and a water park, it still does not have land on which to build.

“We’re looking at the region,’’ the tribe’s chairman, Cedric Cromwell, said yesterday, adding that a location would be announced “in the very near future.’’ 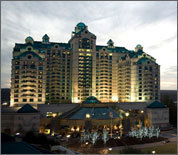