Firms are eager to tap into Libya’s oil wealth 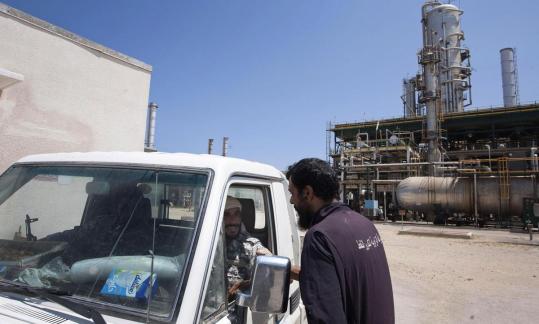 A worker chatted Friday with rebels in a vehicle who were patrolling an oil refinery controlled by anti-Khadafy forces. Before the rebellion, Libya exported 1.3 million barrels of oil a day. (Giulio Petrocco/ Associated Press)
By Clifford Krauss New York Times / August 23, 2011

HOUSTON - The fighting is not over in Tripoli, but the scramble to secure access to Libya’s oil wealth has begun.

Before the rebellion broke out in February, Libya exported 1.3 million barrels of oil a day. While that is less than 2 percent of world supplies, only a few other countries can supply equivalent grades of the sweet crude oil that many refineries around the world depend on. The resumption of Libyan production would help drive down oil prices in Europe, and indirectly, gasoline prices on the US East Coast.

Western nations, especially the NATO countries that provided crucial air support to the rebels, want to make sure their companies are in prime position to pump Libyan crude.

Foreign Minister Franco Frattini of Italy said yesterday that the Italian oil company Eni “will have a number one role in the future’’ in Libya. He reported that Eni technicians were on their way to Eastern Libya to restart production. Eni quickly denied it had sent personnel to the still-unsettled region, which is Italy’s largest source of imported oil.

Libyan production has been largely shut down during the long conflict between rebel forces and troops loyal to Libya’s leader, Moammar Khadafy.

Eni, with BP of Britain, Total of France, Repsol YPF of Spain, and OMV of Austria, were all big producers in Libya before the fighting broke out, and they stand to gain the most once the conflict ends.

US companies like Hess, ConocoPhillips, and Marathon also made deals with the Khadafy regime, although the United States relies on Libya for less than 1 percent of its imports.

But it is unclear whether a rebel government would honor the contracts struck by the Khadafy regime or what approach it would take in negotiating new production-sharing agreements with companies willing to invest in established oil fields and explore for new ones.

Even before taking power, the rebels suggested they would remember their friends and foes and negotiate deals accordingly.

“We don’t have a problem with Western countries like Italians, French, and UK companies,’’ Abdeljalil Mayouf, a spokesman for the Libyan rebel oil company Agoco, was quoted by Reuters as saying. “But we may have some political issues with Russia, China, and Brazil.’’

Russia, China, and Brazil did not back strong sanctions on the Khadafy regime, and they generally supported a negotiated end to the uprising.

All three countries have large oil companies that are seeking deals in Africa.

Brent crude oil prices initially dropped more than 3 percent but ended New York trading basically flat at $108.42. The US benchmark crude, which is less sensitive to events in the Middle East, rose $2.01 to $84.42.