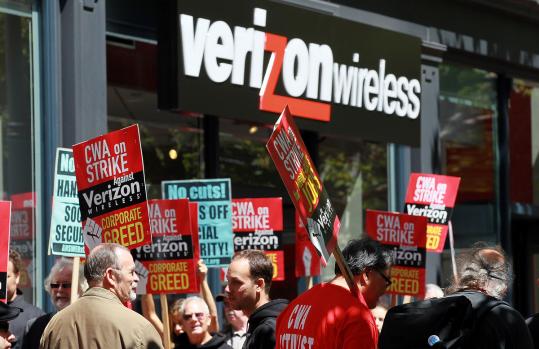 The Communications Workers of America and International Brotherhood of Electrical Workers agreed yesterday to end one of the largest strikes in a decade without winning a new contract agreement, sending their 45,000 members back to work at Verizon Communications Inc. nearly two weeks after walking off the job.

Workers from Massachusetts to Virginia will return to their posts in the company’s landline division tomorrow evening under the terms of the previous contract, as negotiations on a new bargaining agreement continue between the two sides next week.

Since the strike began Aug. 7, the unions said they would call it off when the telecommunications company agreed to bargain on key issues such as pensions, health care, and job security. About 6,000 workers in Massachusetts were on strike, as were 800 in Rhode Island.

“We claim no victory,’’ said Ed Fitzpatrick, president of IBEW Local 2222, which represents the Boston region. “They claim that they want to clearly bargain a contract, and now they have agreed to bargain a contract.’’

Verizon, in a statement released yesterday, said the two sides are making “headway in negotiating a number of local and regional issues, and the parties have agreed on a process for moving forward to negotiate the major issues regarding benefits, cost structure, work flexibility, and job security.’’

The 13-day strike was unusual because it occurred during an economic downturn and a period of high unemployment. Tensions were high as striking workers gave up paychecks and complaints from Verizon customers piled up. The strike turned bitter quickly as the company reported sabotaged cables, and as confrontations on the picket lines between the strikers and Verizon managers who took over their duties pushed the company to seek injunctions against the unions in five states.

On Friday, Verizon New England was granted a limited injunction that ordered four IBEW locals to stop blocking access to the company’s properties in Massachusetts but fell short of limiting the number of picketers at Verizon locations and requiring that picketers keep a distance from company trucks. Verizon spokesman Phil Santoro said the limited scope of the injunction did not affect Verizon’s efforts to end the strike.

Gene Carroll, director of the Union Leadership Institute at Cornell University, said the mounting pressures after nearly two weeks of demonstrations likely caused both sides to push harder toward a resolution.

“The increasing amount of complaints from customers about not being able to get proper service, and the fingerpointing from the customer base was going to the corporation and not the union,’’ he said. “Of course for the unions, no one is getting paid.’’

Candice Johnson, director of communications for the CWA, said the tone of the negotiations changed Friday when top officials from both sides met and Verizon demonstrated that they would start bargaining.

“The voices of these 45,000 members are back at the bargaining table and they are going to be listened to,’’ said Johnson.

Some union members, like CWA worker Claudia Slaney of Hudson, N.H., said they have mixed emotions about the strike ending without a new contract.

“We’re going back to work, which means that we have a paycheck,’’ she said. “We are hoping that they are going to reach an agreement and everything is going to be OK, but we’re right in the same limbo without knowing what’s going to happen.’’

Carroll said that only a new collective bargaining agreement can bring resolution. “The union still has the option to go back on the picket lines, and that hangs over the head of the company,’’ he said.

Johnson said the unions were focused on the negotiations at hand and declined to comment on the possibility of another strike or how long it would take to reach an agreement.

The unions, whose members work for the company’s landline telephone, Internet, and television services, were to begin negotiating with Verizon in June. But according to the unions, the company instead mandated that workers agree to a list of concessions, which included freezing pensions, loosening job security provisions, and changing health care coverage to require higher premiums. They said the changes by a highly profitable company were an attack on their middle-class workforce.

Verizon contends that the loss of more than 35 million landline customers in the past decade in the face of increased competition and a rough economic climate is forcing them to cut costs in an area that is no longer growing. Verizon ran an ad campaign throughout the strike that promoted their proposed concessions as fair and aimed to show that their union workers received a generous benefits package.

Tens of thousands of Verizon managers were required to respond to service calls as customers have complained about slow repairs or inadequate customer service. Verizon said hundreds of phone lines were cut in an attempt to sabotage the company. Union workers were accused of blocking access to Verizon facilities, threatening the mangers’ safety, and dangerously following them to job sites to prevent them from responding to customer calls.

Although the company originally claimed that the strike should not affect customers, a Verizon spokesman acknowledged on Friday that the company could not meet the level of service previously provided by the striking workers.

Paul Feeney, legislative director of IBEW Local 2222, said that some relationships between the strikers and their managers will have to be repaired during the next few days.

“Strikes are messy, it’s no fun, and tensions are high,’’ he said. “But we’re going to go back to work and do what we’ve always done, which is service the customer.’’ 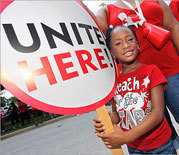 A look at Verizon protests across the country