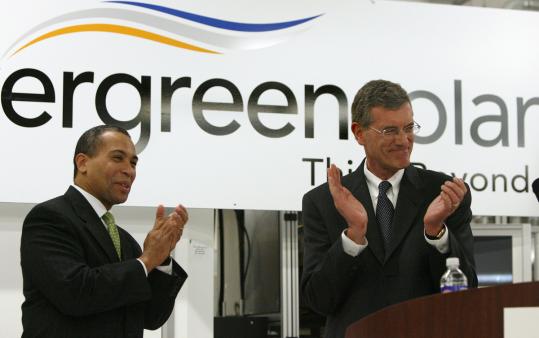 Evergreen Solar Inc. filed for Chapter 11 bankruptcy protection yesterday, completing a stunning reversal of fortune for a high-flying alternative-energy company that once seemed to herald a new era for the Massachusetts economy.

The Marlborough company developed an efficient process for making silicon wafers used in solar panels, one that promised to lower the cost of solar power and bring new manufacturing jobs to the state. At its peak, Evergreen employed roughly 900 people locally and attracted more than $50 million in state support, as its stock price soared above $100 a share.

Yesterday, Evergreen’s stock closed at 18 cents. The company shuttered its manufacturing plant in Devens earlier this year and now has only 85 employees left. Massachusetts is one of its top creditors, owed $1.5 million in rent.

“Make a couple of phone calls and see in the solar projects around the state, where the panels are coming from,’’ McCarthy said. “They’re not coming from a US supplier.’’

Evergreen said it hopes to find a buyer to reorganize its operations and narrow its business to the production of solar wafers, a component of panels, rather than manufacturing the entire module.

In its bankruptcy filing in US District Court in Delaware, Evergreen listed assets of $424.5 million and debts of $485.6 million. The company owes its top 20 creditors $224.4 million, including the money to the Massachusetts Development Finance Agency, or MassDevelopment.

But Evergreen is unlikely to find many buyers, one analyst said, because the company produces nonstandard size wafers, which means few, if any, other manufacturers can use its production equipment or the Devens facility.

“Why this stock is trading at any price above zero, I don’t know,’’ said Theodore O’Neill, an analyst with Wunderlich Securities. “There’s nothing to bid on. Nobody would want any of this stuff. It’s a nonstandard size. What’s the value of the scrap metal inside? That’s the worth of the company.’’

Still, O’Neill called Evergreen a well-run company that fell victim not just to competition, but to weak demand for its products.

“To be successful in this business, they needed to get a fairly significant market share, and they didn’t reach that before we went into a recession,’’ he said.

There had been signs Evergreen was moving toward bankruptcy. In mid-July, the company warned in a financial filing with the Securities and Exchange Commission that it was in danger of running out of cash if it didn’t soon strike a deal with creditors.

Days later, the company made another filing, saying it would not pay nearly $4.2 million in interest payments that had come due. And last week, the company told the commission it had not been able to finalize its quarterly report on time because it “had been required to devote a substantial portion of its personnel and administrative resources’’ to negotiations with its creditors.

The Massachusetts economic development secretary, Greg Bialecki, said Evergreen’s collapse is a reminder of how difficult it is to create manufacturing jobs in the United States.

“It is a cautionary lesson. We knew that it would be challenging to do that kind of manufacturing in the United States,’’ Bialecki said. “It also probably suggests that Massachusetts can’t do it alone - in other words, we probably also need federal policy.’’

Bialecki said state officials will also now pay closer attention to how they dole out tax incentives. Evergreen opened its Devens plant after being awarded $58 million in tax breaks and other aid by the state, although it didn’t take advantage of all of those incentives. The state is trying to recoup some of the money it did get.

“We will take a hard look at whether the way we designed the agreements or the way we created the clawbacks [to recover money] worked,’’ he said.

Peter Rothstein, president of the New England Clean Energy Council, said that Evergreen’s troubles illustrate the difficulties of emerging clean technology companies - many of which are reliant on government aid and face intense competition.

“Unfortunately, Evergreen looks like it is not going to be one that is going to make it,’’ Rothstein said.

He still holds out hope for the state’s other clean technology companies.

“We celebrate the successes and we worry about the failures,’’ Rothstein said, “but then we have to put it into the perspective that this is still a collection of companies that is continuing to grow.’’