AvalonBay is third firm to offer big plan for site

AvalonBay Communities Inc. is proposing to build a 404-unit apartment tower adjacent to the Jacob Wirth restaurant, the latest developer to pitch a large-scale rental housing project in downtown Boston.

The proposed complex would replace an existing parking lot with a 29-story tower that would also include a five-level valet parking garage with 198 spaces.

AvalonBay’s plans were made public yesterday as part of a detailed filing submitted to the Boston Redevelopment Authority. The company is the third developer to propose a large project on the property since 2006; other proposals for offices and a hotel died because of community opposition and weak economic conditions in recent years.

An executive with AvalonBay said yesterday that the property - surrounded by a bustling Chinatown community, Emerson College, and the Theatre District - is ideal for residences.

“We think there is a ton of potential here,’’ said Michael Roberts, a vice president of development for AvalonBay, which has several apartment projects in Greater Boston in the pipeline. “Residential is a good use for this site that will further activate Stuart Street.’’

AvalonBay acquired the property several months ago and hired CBT Architects to design the tower. The project is challenging due to the irregular shape of the site and the presence of the historic Jacob Wirth building. Opened by a Prussian entrepreneur in 1868, the tavern is the second-oldest eatery in the city.

A rendering of the proposed redevelopment shows a glass and metal tower that is sculpted to look like several buildings within a single structure; it would jut out over the back of Jacob Wirth, but would not touch the tavern. The tower would contain studios and one- and two-bedroom units. City regulations require that at least 15 percent of the units be designated affordable.

Several other developers with large apartment projects downtown include Kensington Investment Co., which wants to begin construction next spring on a 29-story building at the corner of LaGrange and Washington streets; and Millennium Partners-Boston, which is planning to begin within weeks on Hayward Place, a 15-story rental and ownership building across from the Ritz-Carlton Hotel and Towers. Both the Bulfinch Triangle area and the South Boston Waterfront have also attracted several proposals for apartment complexes.

It is unclear how neighbors will react to another residential tower proposed for the Stuart Street site. One Chinatown civic leader said yesterday that she is concerned about the height of the building, which is near the 26-story W Hotel and Residences and Archstone Boston Common, a 28-story apartment tower on Washington Street.

“It sounds like the same old kind of thing we’ve been seeing a lot of in Chinatown,’’ said Lydia Lowe, executive director of the Chinese Progressive Association, an advocacy group. “I don’t see it adding to the community’s priorities.’’

Another neighbor voiced support for the project, saying it will help improve a corner of the city that feels gritty and worn. “It fills in a void and will help bring more young professionals into the neighborhood,’’ said Ken Ham, president of the Bay Village Neighborhood Association. “From what I’ve seen so far it’s going to be a good project.’’

The process of reviewing the project will likely take several months. A spokeswoman for the BRA said a community meeting is being planned for next month, but an exact date has not been set. 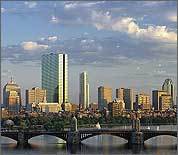