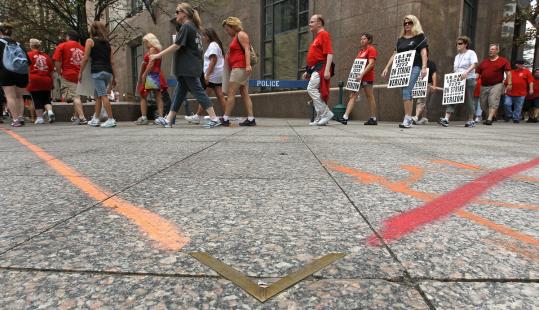 Claudia Slaney did something that many people would consider unthinkable in this economy: give up her paycheck.

She did just that on Sunday when she walked off the job, joining about 6,000 Verizon Communications Inc. employees in Massachusetts after the unions and the company failed to reach an agreement on a new contract. The strike is unusual in its size - 45,000 people nationwide and one of the largest in a decade - and for its timing, during a period of historically high unemployment and concerns about another recession.

“It is a tough situation, but it would have been a lot harder if we didn’t do it,’’ said Slaney, a 41-year-old mother of four who made $1,200 a week as an administrative assistant. “If we gave in to their demands, we’d be without a job the next day.’’

The unions - the International Brotherhood of Electrical Workers and Communications Workers of America - are fighting to keep employee pensions, affordable health care benefits, and a clause that makes it more difficult for Verizon to lay off union workers. If that job security is wiped away, union members fear they will lose their jobs and the work will be outsourced overseas or shifted to company facilities in other parts of the country. A Verizon spokesman contends that would not happen.

Since Sunday, hundreds of striking workers have been picketing the downtown Boston building where they worked. They hold signs that read “IBEW Local 2222 on Strike Against Verizon’’ and chant slogans like “What do we want? Contracts!’’

Passing drivers have been honking in support, and the strikers respond with cheers. Other workers have picketed Verizon offices and stores throughout the region - even on Monday when the Dow Jones industrial average plunged 634.76 points.

If the strike lasts more than two weeks, CWA members will be able to tap a half-billion-dollar strike fund and receive $200, and then $300 each week after. The IBEW doesn’t have a strike fund.

That didn’t matter to IBEW members Kenneth and Lynn Caruso. They have been preparing for this day since the ink dried on the last contract in 2008. The couple, who met at Verizon, started tucking away $100 from each paycheck into an account they dubbed a “strike fund.’’

“Every time our contract comes up, there’s always that possibility of a strike,’’ said Lynn Caruso, 38, who is a service representative, while her husband is a central office technician. “We just want to have something to fall back on.’’

The Quincy couple said they started adding $150 to their strike fund a year ago after they bought a house; the Carusos, who have a 2-year-old daughter, pull in $1,600 a week. Their fund will cover two months of living expenses, including their mortgage, but after that they will have to tap into their 401(k) retirement accounts.

Other striking employees like Dennize Denton of Boston wish they had done more to prepare.

“The economy has been so bad you can’t save,’’ said Denton, as she picketed the downtown Boston Verizon building on Monday.

The 43-year-old single mother of three said she started applying for other jobs a few weeks ago and tried to pay off bills early. But with her son’s college tuition payment coming up, she realized even a day without pay is too long.

“If we get to two weeks, this line is not going to be as peaceful as it is now,’’ she said.

Tensions are already rising, with Verizon saying that service lines have been sabotaged in more than a dozen instances and that some nonunion employees have been assaulted by union members. Meanwhile, the unions reported that members in Amherst, N.Y., were hit by a car as a replacement worker attempted to drive through the picket line.

Verizon and the unions have been negotiating since late June. The big sticking points in the contract have been health care benefits, and preserving employee pensions and a layoff protection clause.

Gene Carroll, the director of the Union Leadership Institute at Cornell University, said Verizon’s contract proposals follow a 25-year labor relations trend of diminishing job security for the average worker. Some of the things the Verizon unions are asking for are no longer standard benefits in America, he said.

“Striking is not a common practice at all now,’’ he said. “It’s a risky strategy on the part of the union, and it’s also very courageous.’’

Don Trementozzi, president of CWA Local 1400 in New England, said the unions went on strike to force the company to negotiate on their demands.

The number of landline customers has dropped nearly 60 percent over the past decade, to 26 million last year. At the same time, the number of cellphone customers grew to 94 million, according to Verizon figures.

Santoro said Verizon seeks to remove the layoff clause because it limits the company’s ability to reassign union employees to other cities when work shifts. Because of the contract clause, there have been “no layoffs of union employees in many, many years.’’ He added that fears that jobs would be outsourced are “baseless.’’

Passersby who watched the parade of workers surrounding the Verizon building in the Financial District shared mixed emotions about the work stoppage.

“It’s important that these [strikes] are organized well to show a threat, because big companies don’t get easily threatened,’’ she said.

Chuck Miller, a 32-year Verizon veteran who provisions circuits, was part of the 1989 strike that lasted 17 weeks over similar issues.

The Charlestown man said his wife left the landline division after that strike and now works for Verizon Wireless. He fears the current strike could go on for months - even though both sides continued negotiations for the second day in a row yesterday.