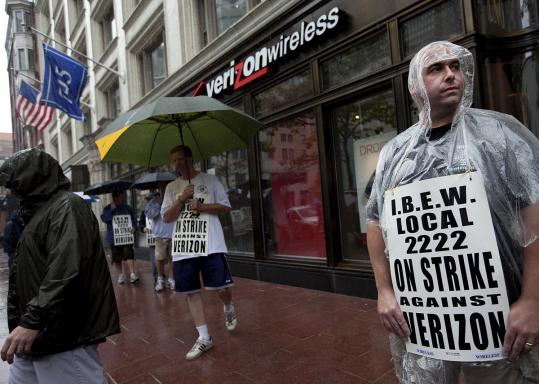 About 45,000 Verizon employees, including 6,000 in Massachusetts, went on strike yesterday after failing to reach a new union contract in one of the biggest labor actions in the United States in recent years.

Those on strike are members of the International Brotherhood of Electrical Workers and the Communications Workers of America who work from Massachusetts to Virginia on the telecommunications company’s landline telephone, Internet, and television services.

Talks lasted until the contract’s deadline on Saturday night, but the parties could not agree on the cost of health care benefits or on other issues. The IBEW said talks would resume this morning; a Verizon spokesman said he was not sure when they would resume.

“It’s probably a little gut wrenching to announce a strike, but enough is enough,’’ said Myles Calvey, a business manager with IBEW who is representing New England in negotiations with Verizon. About 800 workers in Rhode Island are also striking.

Verizon spokesman Phil Santoro said the strike should not affect customers. The company prepared by training tens of thousands of other employees to conduct customer service, repairs, installation, and other jobs done by unionized employees.

“We are confident that we can continue to run this business,’’ he said.

The strike, said Andrew Sum, director of the Center for Labor Market Studies at Northeastern University, is unusual at a time when unemployment is high, the economy is weak, and wages have not increased for the average US worker in more than a decade.

“When you think about it, going on a strike at the time when the average worker is gaining nothing is pretty risky business,’’ he said.

Steve Early, a former national staff member of the CWA, said the last comparable strike in New England was in 2002, when 3,000 Boston janitors went up against building service contractors.

Thomas Kohler, a professor of law at Boston College who specializes in labor and employment law issues, said America has one of the lowest number of strikes of any major economy. The Verizon strike “shows the belief on the union’s part that the technicians cannot easily be replaced,’’ he said.

The strike could affect utilities across the region. Local 369 of the Utility Workers Union of America, which includes NStar and National Grid employees, has refused to cross picket lines.

A Verizon-owned telephone pole or manhole, for example, might also be used by NStar or National Grid and vice versa, said David Leonardi, president of UWUA Local 369. If any of the shared utility equipment needs repairs and is at a picket site, Local 369 members would not help.

“The number-one reason is that the company cannot, in our view, guarantee the safety of workers when they are crossing picket lines,’’ Leonardi said. “Those folks are out there for a reason and sometimes get a little testy.’’

Yesterday, more than 1,500 IBEW union members picketed outside Verizon’s local headquarters in downtown Boston, and more are expected to surround Verizon stores across the region today.

Union spokesmen said they went into negotiations a month ago willing to make concessions related to health care benefits. They said Verizon’s proposals to limit sick days, eliminate some holidays, such as Martin Luther King Jr. Day and Veteran’s Day, freeze pensions, and remove a clause in the contract that limits the company’s ability to lay off workers went too far.

Calvey, of the IBEW, said the cuts are unacceptable from a company that had $27.5 billion in revenue in the second quarter.

Verizon contends the massive loss of landline customers during the past 10 years, increased competition, and the rough economic climate are forcing the company to cut costs “in an area that is no longer growing for us.’’

“These employees are working under contracts that were negotiated and created in a time that is very different from today,’’ said Santoro, the Verizon spokesman.

Santoro said the company’s increase in second-quarter revenue was because of the success of its wireless division. Wireless customers climbed to 94.1 million last year, while the landline division, where the striking workers are employed, lost 8.2 percent of its customers, declining to 26 million. In 2000, Verizon had 63 million landline customers.

The last Verizon strike was in 2000, when 75,000 members of the CWA and IBEW walked off the job for more than two weeks over contract issues. At least 12,000 were in Massachusetts.