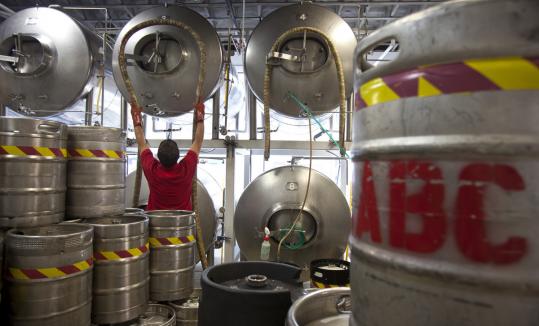 Dylan L’Abbe-Lindquist, of Rockport, the head brewer at Cape Ann Brewing Co., tidied up after a day’s work. Owner Jeremy Goldberg said the loss of his farmer-brewer status would likely put his entire operation out of business. (Dina Rudick/Globe Staff)
By Erin Ailworth Globe Staff / August 4, 2011

A rule change at the state’s Alcoholic Beverages Control Commission could hurt 25 craft breweries in Massachusetts, and some smaller beer makers say it could even put them out of business.

Brewers such as Samuel Adams beer maker Boston Beer Co., Mayflower Brewing Co., Ipswich Ale Brewery, and others that operate under what is called a farmer-brewery license would be affected by the change, which has caused a buzz in the industry since it was disclosed in a commission advisory earlier this week. The change still has to be finalized, state officials said.

The new rule would require brewers under that license to grow at least half the hops and grains they use, or get them from a domestic source - which many said would be difficult in Massachusetts. Without that license, breweries could not operate on-site tastings, and, beer makers fear, would be forced to pay distributors to deliver their beer to retail outlets rather than save money by doing it themselves.

At Cape Ann Brewing Co. in Gloucester, owner Jeremy Goldberg said that the loss of his farmer-brewer status would likely put his entire operation out of business. At the least, he said, he’d be forced to close his new brew pub, in which he invested about $1 million, and lay off 30 employees.

“We would have a brewery that couldn’t serve [beer] on the premises,’’ said Goldberg, who said it could be very hard to get the local liquor license he would need to operate in Gloucester without his farmer-brewery license. “It is going to kill my business.’’

State officials say the change is meant to clarify regulations defining a farmer-brewer, or someone who grows cereal grains or hops to produce a malt beverage. The law is designed to promote farming in Massachusetts.

Current state regulations do not quantify just how much of their own ingredients beer makers must grow. But on Monday, the commission issued the quickly controversial advisory saying the holder of a farmer-brewery license - which costs hundreds to thousands of dollars less than other brewers’ licenses - must now prove that they grow at least 50 percent of the cereal grains and hops they use in a year to make beer or other malt beverages, or get those ingredients from “domestic farmland,’’ which brewers read to mean farms in Massachusetts.

“If they want a farmer[-brewer] license, they have to show that they are engaged in farming, and that they grow the ingredients,’’ said William Kelley, general counsel for the commission.

While the 25 affected brewers do grow a portion of their cereal grains and hops, few could grow the 50 percent the new rule demands. Meeting that requirement, they say, would be nearly impossible.

“There’s no brewer in the state that could meet that,’’ said Ipswich Ale Brewery’s Rob Martin, president of the Massachusetts Brewers Guild, which represents 34 craft brewers in the state. “For me to meet that today, I would need 1,200 acres of grain.’’

Brewers also said they believe they would have to sell their beer through distributors if they lost their farmer-brewer licenses, eating into their profits and forcing them to compete against major brewers like Miller and Anheuser-Busch for space on delivery trucks.

That’s because federal law established a three-tier system for distributing alcoholic beverages after the repeal of Prohibition. Under it, producers, who include brewers, wine makers, and distillers, must only sell to distributors, who then sell to retailers; and only retailers may sell their products to the general public.

But the Beer Distributors of Massachusetts, a trade group, said it interprets state law to say craft brewers would still be able to sell directly to retailers.

“If they’re in-state manufacturers, they don’t have to go through distributors,’’ said John Stasiowski, president of the association. “We have no dog in that fight.’’

The advisory about the rule change resulted from a commission hearing last month to determine whether to issue a farmer-brewery license to Idle Hands Craft Ales in Everett.

Officials said they questioned whether the brewer met the necessary farming requirements, and have asked the company for proof that it grows at least 50 percent of its grain or hops.

The case prompted the state to clarify the definition of a farmer-brewer for all brewers.

Brewers are scheduled to meet next week with the state treasurer’s office, which oversees the Alcoholic Beverages Control Commission, to hash things out.

“This law, which is designed to promote farming, establishes licenses that give farmers privileges not granted to other alcoholic beverage manufacturers, but also requires that farmers grow their own raw materials,’’ the commission said yesterday in a statement to the Globe. “We are looking forward to an open dialogue with an eye towards reaching a reasonable working solution that will promote small business growth and economic development in Massachusetts.’’

Local brewers say they hope to demonstrate that they are already significant supporters of farming in Massachusetts: many brewers provide grain waste to local farmers for cattle feed and also purchase other crops - like cranberries, blueberries, and pumpkins - for specialty brews.

“I do hope that once the ABCC understands the unintended consequences, that they’ll change their ruling because it isn’t good for farmers or brewers,’’ said Michelle Sullivan, a spokeswoman for Boston Beer Co.

Sullivan said that while her company isn’t in danger of going out of business because it already also holds a manufacturers license, the loss of its farmer-brewer designation would hurt.

“Primarily for us, that [license] has been useful for selling beer directly to visitors at the Boston brewery,’’ Sullivan said. “It would change the visitor experience if we weren’t able to do that.’’