When Peter Goulet of Dorchester tunes to Boston’s Channel 7 these days, he’s not just watching his favorite newscast. He’s got a front row seat to auditions for anchors.

Since WHDH-TV (Channel 7) lead anchor Frances Rivera announced last month that she would be leaving the NBC affiliate for a position in New York City, viewers have been treated to a parade of potential successors.

“You never know who is going to show up on the anchor desk,’’ said Goulet, a school guidance counselor. He’s rooting for longtime WHDH reporter and secondary anchor Christa Delcamp to take over for Rivera, who shared the anchor desk with Kim Khazei. “If they are going to stay with that same female anchor team thing, they should go with her.’’

In broadcast TV news - and particularly in a major market like Boston, where newscasters have long careers and turnover is rare - main anchor slots rarely open up. So WHDH has been testing in-house candidates to replace Rivera, who was with the station for 10 years and is half of the station’s prominent female evening news anchor team. The station also has a secondary anchor position open for late afternoons and evenings, after anchor Matt Lorch announced he was leaving to return to his native Seattle.

Along with Delcamp, the other likely candidates include morning anchors Anne Allred, Amanda Grace, and Adam Williams, and anchor/reporter Sorboni Banerjee, all of whom have been alternating helming weekday and weekend mornings and evening newscasts.

“They have been definitely tinkering with the formula. . . . It’s not unlike a chef working on a new recipe,’’ said Geoff Klapisch, a media professor at Boston University. “Summer is a traditionally slow time for television, ratings overall are down, which is a great time to experiment with different combinations.’’

Chris Wayland, WHDH’s vice president and general manager, said a decision on who will replace Rivera or Lorch could be made soon. In recent years, the station has imported reporters and anchors from Miami sister station WSVN-TV (Channel 7). “We feel like we have a lot of good options both internally and externally,’’ he said.

Wayland and executives at the company’s Miami headquarters may be weighing several factors. For one, when a station has such a position available, agents flood general managers with video reels of their clients from all over the country. Station officials also consider viewer feedback and research from focus groups.

Then there is on-air chemistry with the other lead anchor, Khazei. With television being such a visual medium, both co-anchors must complement each other.

“We are going to pick the best person that would work with Kim,’’ Wayland said.

Because WHDH ushered in “the team approach’’ to marketing the station years ago, officials can easily promote from within. “The winner is stepping into a job where the trail has been blazed,’’ Klapisch said. “This position is an important piece of the puzzle, but it’s not the entire puzzle.’’

Rivera has been one of the most familiar faces in Boston, with a high-profile presence at WHDH since 2001, when she debuted there as a morning anchor. Since 2006, she has been the main co-anchor for the highly competitive 5, 6, and 11 p.m. newscasts.

Rivera, along with Khazei, has also figured prominently in WHDH’s marketing campaign, including a giant billboard off Interstate 93 in Dorchester that highlights the pair as its female anchor team, or simply “Frances and Kim.’’ Station officials teamed the women up in 2009 in an effort to boost ratings at a time when it lost its longtime number one ratings position at 11 p.m. to WBZ-TV (Channel 4), and more recently, to WCVB-TV (Channel 5).

In the July ratings sweeps, WHDH regained its lead at 11 p.m. among viewers aged 25-54, a key demographic that advertisers covet.

The question of who may take Rivera’s slot has sparked a guessing game on local blogs and websites. Some media watchers said that the station seems to be heavily promoting Grace in various anchor positions. (Grace, who has been with WHDH since 2008, recently joined the morning team as a co-anchor.) Others say that Allred, who joined WHDH in 2006, and was dispatched to cover the Winter Olympics last year, could be elevated from anchoring mornings to evenings.

Paul Karpowicz, a viewer who lives in Hudson, believes Delcamp, who has been at WHDH since 2003, would make good candidate for Rivera’s slot.

“It would be a good growth opportunity for her,’’ said Karpowicz. “Whoever does the job well, I am fine with it.’’ 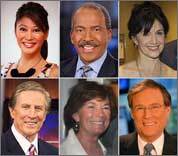