AAA rating not all it used to be

Only four US companies still get top marks 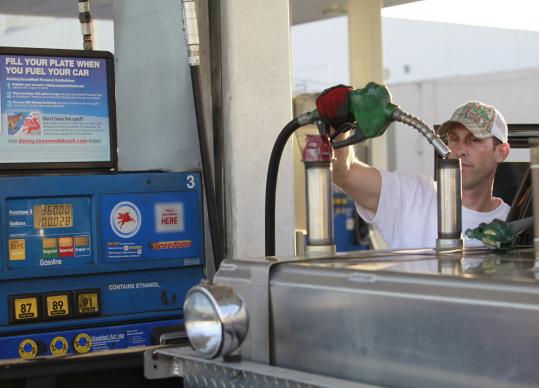 A driver filled up his gas and diesel tanks at a Mobil gas station in Los Angeles. Exxon Mobil is one of four companies with AAA credit ratings. The others are Automatic Data Processing, Johnson & Johnson, and Microsoft. (Damian Dovarganes/Associated Press/File 2010)
By Eric Dash New York Times / August 3, 2011

Hanging over the debt ceiling negotiations in Washington has been the threat of the United States losing its AAA credit rating, a coveted measure of the federal government’s financial strength. But in corporate America, the top rating long ago became an anachronism.

Scores of big companies have lost their AAA status in recent years - only four continue to hold the rating - as it became seen in board rooms as more of a straitjacket than a path to riches. Just as many consumers relied on their credit cards to finance a higher standard of living, companies took on more debt to reap bigger returns.

The choice did not appear to hurt them. The borrowing costs of companies with AAA ratings and those one level below are not that far apart.

More and more, companies have found that a AAA credit rating is not something worth aspiring to if a more conservative approach means lower profits.

Today, markets often render credit judgments before the rating agencies can take out their pens, so a downgrade has a less noticeable effect. By that time, many of the traditional benefits of being deemed AAA, like lower borrowing costs and reputational glow, have evaporated.

In the early 1980s, around 60 companies had top-flight AAA credit. By 2000, the number of AAA companies was about 15. Today just four organizations - Automatic Data Processing, Exxon Mobil, Johnson & Johnson, and Microsoft - can claim those once-coveted three initials.

Analysts say corporate buyouts and acquisitions accelerated the trend. Many AAA companies lost their ratings when they were taken over and their new owners loaded them with cheap debt to help pay for the deal. Other strategic decisions also triggered downgrades.

Meanwhile, the financial crisis and deep recession laid into several of the sturdiest pillars of American capitalism. Berkshire Hathaway, General Electric, and Pfizer all lost their AAA ratings.

Still, a funny thing happened when these companies were sent down to AA. Investors shrugged off the change; the markets had already rendered their verdict. Borrowing costs for General Electric and Berkshire actually fell in the weeks after they were downgraded in spring 2009, amid a broader market rally.

Ratings for companies and countries are viewed differently, even if they are evaluated in much the same way.

For most Americans, the prospect that the government could lose its vaunted AAA credit rating is almost unthinkable - a blow to national pride and consumer confidence that could turn out to be more damaging than any increase in borrowing costs.

That is why even after President Obama signed a law yesterday that lifted the debt ceiling, some in Washington were worried that the plan’s spending cuts were not deep enough to appease all the major rating agencies.

For now, all three major rating firms continue to give the United States a AAA rating. But yesterday, Moody’s said its outlook was negative after putting the government on notice last month that it could be downgraded. Fitch said that it planned to complete another review of the government’s finances by the end of this month, and Standard & Poor’s has warned that the United States might lose its rating if it did not sharply rein in the deficit.

It helps that the dollar remains the world’s leading currency, ensuring that demand for US debt is strong in spite of the nation’s financial challenges.

But the truth is, even as the government maintained its AAA grade, the markets suggested long ago that the United States no longer deserved it.

The credit-default swap market provided one clue. During the financial crisis in early 2009, the price of insurance that would pay off if the US government defaulted on its debt was similar to that offered for companies ranked just above junk. Even today, the price of insurance on a government default has been higher than that for Colgate Palmolive, the global toothpaste giant, which has a rating two notches below AAA.

The economic data also suggest that the United States has higher debt levels than most AAA corporate borrowers. Today, the US debt as a percentage of the nation’s economic output is 75 percent and could top 84 percent by 2013, according to Standard & Poor’s research. The typical AAA-rated country has a ratio of about 11.4 percent.

But could a US company’s credit really be more solid than the full faith and credit of the United States? The ratings agencies may say so one day, but lawmakers and citizens might have a reaction like that of Warren E. Buffett, after his Berkshire Hathaway lost its prized AAA status in 2009. “We’re still AAA in my mind,’’ he said.