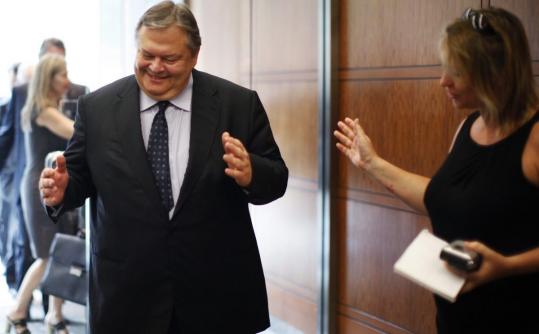 The agency said it downgraded Greece’s debt ratings from CAA1, already deep in junk-bond territory, to CA - one step above default - “to reflect the expected loss implied by the proposed debt exchanges.’’ It said it would reassess that rating once the deal has been completed.

Moody’s offered a generally positive assessment of the plan agreed to by European leaders Thursday, saying it “benefits all euro area sovereigns by containing the contagion risk that would likely have followed a disorderly payment default on existing Greek debt.’’

But the ratings agency expressed concern about “the negative precedent set by the endorsement of distressed exchanges’’ between Greece and its creditors, a reference to the bond swaps that private investors will undertake.

Germany and several other countries had insisted that no new rescue for Greece was possible without banks bearing part of the pain. Fitch Ratings said Friday that doing so would constitute a restricted default.

“While the rating agency believes that the overall package carries a number of benefits for Greece - a slightly reduced debt trajectory, lower debt-servicing costs, as well as reduced reliance on financial markets for years to come - the impact on Greece’s debt burden is limited,’’ Moody’s added.

Standard & Poor’s and Fitch have also rated Greece as junk, or noninvestment grade.

The Greek government responded with disdain to the downgrade.

“All governments pay a subscription to these agencies,’’ Reuters cited Elias Mosialos, a government spokesman, as telling Radio 9. “We, I think, do not need the reviews anymore. They have no practical value. Perhaps the finance ministry should end its subscription.’’

Even if the rescue plan manages to hold speculators at bay, Greece remains heavily indebted relative to the size of its economy and needs to expand its gross domestic product.